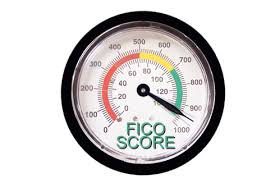 The latest Origination Insight Report from Ellie Mae, which reports data for February 2014, shows the average FICO score on an approved mortgage when purchasing a home was 755â€¦with an average Loan-to-Value (â€śLTVâ€ť) of 80 percentâ€¦ and average Debt-to-Income (â€śDTIâ€ť) ratios of 23% on the front-end and 34% on the back-end.

Perhaps even more alarming, the report also showed that the average FICO on a denied conventional loan this year was 722 when attempting to purchase, with an LTV of 81%, and a 26% front-end and 42% back-end DTI.

One borrower attempting to refinance recently reported that he was informed on day 80 of his mortgage application process that he would not be getting approved because of a missed $8 electricity bill from two years ago that absolutely crushed his FICO score, taking it from 790 down to an unbelievable 680.

Actually that shouldnâ€™t come as a surprise because the way FICO sets up its algorithms, the higher your credit score, the greater the damage that occurs should you slip up.Â  According to FICO, if your score is 680 and you make a payment 30-days late, youâ€™d lose 60-80 points, but if your score is 780 and you do the same, youâ€™ll lose 90-110 points.

So, if anyone was wondering why demand for both purchase mortgages and refinancing would be so lowâ€¦ well, wonder no more.Â  Think about those numbers for the average purchase mortgageâ€¦ 755 FICO, with 20% down, and a back-end DTI of 34%?

Iâ€™m not certain, but honestly, other than the 20% down payment, I donâ€™t think I could have ever qualified to buy a home under that scenario, â€¦ and weâ€™ve owned the home weâ€™re in now since 1990.Â  And that doesnâ€™t bode well for the economy going forwardâ€¦ it is truly a remarkable fact.

If youâ€™re a mortgage broker or a Realtor, youâ€™ve got some tough going ahead because I donâ€™t care what anyone tells you there just arenâ€™t an unlimited number of people looking to buy homes that will be able to fit into that sort of stringent qualifying criteria.Â  Many will need help getting their FICO scores increased, and thatâ€™s something you can help them do.

Last July, after months spent reviewing dozens of others, I was introduced toÂ Financial Education Services, which is a credit restoration company that has been headquartered in Michigan for over a decade.Â  The day I was introduced to the company, I spoke with the co-founder and CEO for a couple of hours.Â  Obviously, I liked what he had to say.

The company, after more than a decade, was A+ rated by the Better Business Bureau, and that impressed me.Â  I learned that they were CROA compliant and that there were no outstanding complaints anywhere, no FTC or state investigations, and nothing negative online.

Their system allows customers to track their progress 24/7, so they know exactly whatâ€™s happening and whatâ€™s ahead at all times.Â  And I really liked that it wasnâ€™t just about writing letters, because they not only worked to eliminate what shouldnâ€™t be on someoneâ€™s credit report, they also coached customers so theyâ€™d know what positive things could be added to their reports to increase their scores, and which debts should be paid and which accounts should and shouldnâ€™t be closed.

I liked that they are truly an education companyâ€¦ that they train their Agents to provide education above all else, not sales pitches.Â  And they taught me things about the whole credit racket that I didnâ€™t know before and that will make a difference in my credit score for the rest of my life.

One of the things I explained to the CEO that day was that for me to endorse a company on Mandelman Matters, I would have to spend a significant amount of time learning everything about the organization.

Iâ€™d want to interview the companyâ€™s customers, Agents, and operations employees, even those who were not happy with the companyâ€™s services.Â  And Iâ€™d need to research the company with state and federal regulatory agencies, in addition to searching online to see what anyone had to say, whether good or bad.

There could be nothing hidden, Iâ€™d need all my questions answered candidlyâ€¦ and without any hesitation the CEO agreed.Â  And I loved what they did for peopleâ€¦ getting their credit scores up by more than I would have thought possible.

(CLICK HEREÂ to listen to what their customers had to say when I called to interview them.)

I also liked that the company offered a business opportunity to those that wanted to become independent agents and offer the companyâ€™s credit restoration services to others.Â  And if youâ€™re a mortgage broker, real estate agent, or if you work with credit conscious consumers every day, then I think you should consider adding credit restoration services to the menu of services you offer to your clients.

Letâ€™s be completely honest about thisâ€¦ the demand for housing and mortgages has fallen, and itâ€™s not going to be expanding significantly for some time.Â  But, at the same time, weâ€™ve got 30-40 million Americans who have seen their credit scores damaged as a result of the worst economic downturn since the 1930s, and more are falling into this group every day.

So, while demand for mortgages and homes has declined, in the years ahead the demand for credit restoration services is expected to be one of the fastest growing industries in the country.Â  And I canâ€™t think of a better way to create future customers or get referrals, than to be responsible for improving someoneâ€™s FICO score.

If you work with credit conscious consumers every day, doesnâ€™t it make sense to supplement your income by offering the services that many of your customers are going to want and need in the years ahead?

Last year,Â Financial Education ServicesÂ doubled in sizeâ€¦ and to double in size after more than a decade in business in simply unheard ofâ€¦ it almost never happens.Â  They did it because of the increasing demand for credit restoration, no question about that, but they also did it based on referrals from existing customers, along with bankers, mortgage brokers and realtorsâ€¦ and that says a lot about any company.

No matter what oneâ€™s FICO score isâ€¦ no matter what has caused it to dropâ€¦ if consumers work with and listen to Financial Education Services, their scores will be significantly higher than they were when they started, which will make their lives significantly better in numerous ways.

Iâ€™ve come to believe that this company is â€śbest in class.â€ťÂ  I canâ€™t say Iâ€™ve tried them all, but I can say that they have outperformed my expectations, and the expectations of thousands of others.Â  With their satisfaction guarantee, what does one have to lose except oneâ€™s low FICO score?