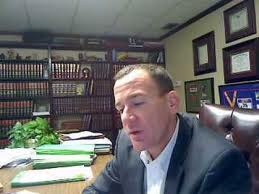 If you’ve been following the news related to the foreclosure crisis over the last 4-5 years, then you already know who Matt Weidner is… that is to say that you can’t possibly have missed him.  Matt’s many things, but subtle… well, not so much.

Matt’s a good friend of mine.  Not only do I call on him to explain legal matters and keep me up to date on who’s winning what and what’s not working well, but he’s also a prolific blogger in his own right at mattweidnerlaw.com.

Matt was trained in the often frustrating art of foreclosure defense by none other than Jacksonville Legal Aid’s own, April Charney.

Matt came to the foreclosure defense world from being a title attorney, so he had plenty of foundation upon which to build a very in-depth and technical understanding of the legal issues involved in foreclosure.  And he’s a Florida attorney, so that’s really saying something.

What I like most about Matt is that he has no secrets… if he’s angry about what the judge did in court today, I know why by the time I sit down for dinner… and I’m all the way across the country in Southern California.

Matt’s been banging his head against Florida’s famous foreclosure wall for so long that he’s knows where that wall is softening.  He’s been up against some of the most unethical and criminal cartels in the history of residential real estate… none other than The Law Firm of David Stern himself, a foreclosure mill that may just have forged more paperwork than anyone in American history… I’m not sure about that, but it would be interesting to know if that’s actually right.

He’s lived through the “Rocket Docket” too.  I don’t think Matt would say I was exaggerating much, if at all to say that he’s seen everything at this point.  And that makes him a very good defender of homeowner rights in the Florida courts, as far as I’m concerned.  I think of Florida like a twist on that movie from a few years back, “No Country for Young Men.”

Like, if you’re just out of law school, and don’t know what you’re doing as a foreclosure defense lawyer in Florida, you probably end up hanging yourself three weeks after hanging out your shingle in Tampa.  And that would be funny were it not somehow eerily true.

So, look… call Matt anytime… tell him I said hello and to call me whenever he’s free.  And then just lay it out whatever your situation is… I promise you that he’s heard it before… maybe hundreds of times before, as a matter of fact.