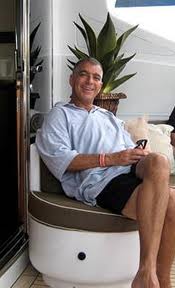 David Stern has a $16 million Florida mansion on the Intracoastal Waterway, a $20 million plus, 130-foot jet propelled yacht, four Ferraris, four Porsches, two Mercedes Benzes, one Cadillac and a Bugatti.  Last year, Stern bought his next-door neighbor’s $8 million home just so he could tear it down and build a tennis court.

David Stern is the “Foreclosure King.”  Although there are others of his ilk, his company handled 70,382 foreclosures in 2009 alone, which is almost 200 a day, assuming one could work 365 days a year.

Stern is emblematic of everything that’s ugly and wrong with the mortgage banking and finance industries in this country.  Whether all the allegations about him are true is irrelevant.  In my view, he’s an unethical, arrogant, abusive and callous piece of itinerant garbage who obviously cares nothing about who he harms as he pursues his sole objective of putting people out of their homes as quickly as possible… the sort of person that I personally might gladly go pay-per-view to watch get hit by a fast moving city bus.

Stern’s firm has been accused of gouging homeowners trying to get out of default, as exemplified by the 1998 class action lawsuit filed by Tallahassee attorney, Claude Walker on behalf of tens of thousands of homeowners alleging that Stern piled on excessive fees when they were trying to keep their homes.  Stern settled the case for $2.2 million after a couple of years, and both the Florida Supreme Court and Florida State Bar Association reprimanded him for “professional misconduct,” related to the case.

And yet, in two consecutive years, 1998 and 1999, Fannie Mae named him “Attorney of the Year,” which is the perfect illustration of what’s gone hopelessly wrong in this country… the total disconnect between “us” and “them”.  We the people, at least until recently, have thought that we were still a part of the greatest country on Earth as we pursued the American Dream, while “they” viewed us only as indebted little pawns on their chessboard, forced to play by their rules, moved around as they saw fit and sacrificed without a second thought.

Between 2006 and 2008, the number of homeowners thrown into foreclosure doubled as a result of the wildly reckless and entirely unregulated bankers of Wall Street destroyed the credit and bond markets, causing the total destruction of the housing market and leaving prices in the free fall in which they remain today.  And Stern’s business, quite predictably, began a meteoric rise, with lenders and servicers sending 12 times as many repossessed homes his way.  Andy Kroll, writing for Mother Jones, in his article of August 3, 2010, “Fannie and Freddie’s Foreclosure Barons,” reported that Stern’s non-legal revenues went from $40 million to $200 million, as the company’s employee count shot up from 400 to almost 1,000.

But, as court records show and all involved now understand, there were problems with many of these foreclosures.  The legal documentation required was seriously lacking, and Stern saw no problem with routinely “fixing” such problems by backdating assignments, changing case chronologies, and in general, doing whatever was necessary to get the job done, regardless of the fraud he was perpetrating on the Florida courts, and to say nothing of the human cost inherent to recklessly putting people out of their homes and onto the streets.

As Florida’s foreclosure defense attorneys gradually caused the onion of fraud to unpeel in front of the Florida judiciary, Fannie Mae finally dropped him from their list of foreclosure law firms.  Stern’s firm has now withdrawn from an unprecedented 150,000 Florida foreclosure cases.

Outspoken Florida foreclosure defense attorney, Matt Weidner says, “the pressure on judges and undue burden placed upon the clerks and others that make up the state’s judicial system is impossible to overstate.”

Sitting in the Lee County Courthouse this past week, Weidner told me that he couldn’t help but wonder about the price that Stern will or will not be forced to pay for the chaos that’s resulted from his firm withdrawing from 150,000 foreclosure cases.   “The cost to taxpayers is without question untold, and perhaps even incalculable millions… why is this guy still driving around in a Bugatti?” Weidner asks.  “And yet to-date, the Florida State Bar Association has said or done essentially nothing.”

Weidner points out that, “There are still houses going to sale because of work Stern’s firm did, work that we now know was at best inadequate and at worst fraudulent.  Legal requirements for foreclosure have not been met and these homes should not, in many cases, be sold.  How will our state’s courts ultimately handle that?”

Another Florida foreclosure mill, Ben Ezra Katz, has now also been delisted by Fannie Mae as a result of ignoring the state’s rules of foreclosure, and Weidner points out that it’s not hard to imagine that many such firms have been gearing up, extending themselves to cash in on their foreclosure fueled bonanza.  A windfall that now won’t be coming as planned.  “How many of these firms are now going to find themselves insolvent?” Weidner also quite reasonably wonders.

Stern’s professional life is unraveling.  He and his firm are being investigated by various agencies, he’s being sued by ex-employees, but April Charney, the Jacksonville Legal Aid lawyer that, perhaps more than any other in the state, has been leading the charge to stop illegal foreclosures and see that the rule of law is upheld, says that she’s not all that interested in Stern one way or the other.  “In the scheme of a criminal enterprise Stern’s just a bag-man.  And bag-men get paid quite well, but so what?” Charney says as one might explain water being wet or the sky being blue.

“We… the people… are the real villains here,” Charney says sadly, “for allowing what’s happened to happen… for not being vigilant… for making sure our regulators were regulating.  The Center for Responsible Lending has told Congress of the problems and rampant abuses for years, but basically they were ignored.”

“Stern’s just a bunny that’s already been run up the tree.  We’re the real game here. We’re still listening to the mortgage servicers and bankers, we’re still allowing the customer service abuses to continue almost unchecked.  We’re still allowing the bankers to peek in our window to see if we’re home and our media, although the coverage is certainly better every day, is still too often carrying water for the bankers,” Charney opines.

April Charney has fought this battle a long time.  And she says that what’s so tragic is that so much of it could have been prevented.

Talking to April Charney always gives me pause.  “I don’t think he (Stern) thinks he did anything wrong,” she says.

And somehow that’s just not that big a stretch for me.  I think she very well could be dead on right.  I mean, he’s not even close to being alone in what he’s done for a living.  There are many others like him.  It’s our entire culture that has somehow come to accept the David Sterns of the world, while lawyers fighting to keep people in their homes are too often seen as doing something almost untoward.

What’s happened to us?  When did our society so completely lose its way?