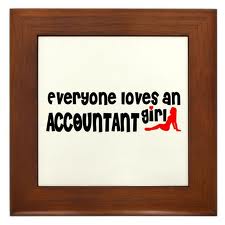 Jr. Deputy Accountant is one of my favorite bloggers. Ā And it’s a she, by the way, her name’s Adrienne, and as she puts it…

“I train accountants to pass the CPA exam for a living though I’ve recently quit my job to do this writing thing full-time. If it works out, you get lots more funny pictures. If it doesn’t? I’ll be foaming your latte by day and still up Bernanke’s ass by night.”

Oh, that’s the other thing… she’s definitely rated ‘R’ so if language has the tendency to bother you, JDA may just knock you out of your chair and cause you to running screaming into the street. Ā But, the thing is… she doesn’t just swear, she knows how to swear… and that makes her immeasurably crude, funny, poignant, penetrating and perky all at the same time.

I actually don’t know how often I agree with her opinions, I’ve never actually thought about that. Ā I like reading her no matter what, so when she blasts into Bernanke or Geithner… well, it’s always a good time, as far as I’m concerned. Ā And as it states proudly atop her blog:

JDA recently posted an article about the Reuters story that came out right after Christmas, which reported that:

U.S. retail sales rose in the week before Christmas as shoppers hurried to finish their gift-buying, putting holiday sales on track to hit the high end of estimates, according to data released on Tuesday by the International Council of Shopping Centers and Goldman Sachs.

Retail sales rose 4.8 percent for the week ended December 25 compared to the year-earlier period, helped in part by shoppers who could shop all day on Christmas Eve, which was a day off for many given that Christmas fell on a Saturday this year.

The ICSC and Goldman Sachs said retail sales in November and December were on track to rise 4 percent compared to a year ago. Two weeks ago, on the basis of strong November sales, they raised their forecast to a rise of between 3.5 percent and 4 percent for the holiday season.

Now, there was no doubt in my mind that this sort of crap was on its way, I mean if they can tell us that housing prices went up over the last few months, or that unemployment went down… they can tell us absolutely anything. Ā But this particular piece came out on the 28th, or maybe even the 27th, which is like knowing what retail sales were before the retailers themselves knew. Ā I mean, I seriously don’t think many retailers know what their numbers for Christmas look like by the 27th, it takes time, even in today’s computer generated world for national retailers to total things up.

But then I read the piece again and I realized that what’s being reported is that theĀ International Council of Shopping Centers and Goldman Sachs raised their estimates based on our “strong November sales”… and low and behold we broke through their estimates,Ā which they claim were higher than their numbers last year, which were… I have no idea. Ā All I know for sure is that I’m not buying a single word of what they’re reporting here. Ā I think it’s all based on a Press Release put out by Goldman Sachs, and has nothing to do with reality.

So, anyway… when I saw her post I just had to comment and I thought I’d share my comment with my readers in order to make a point, and introduce you to JDA at the same time, which is something I’ve been planning to do for a long, long time. Here’s a link to her post, and how it starts, but my comment follows below.

“Does anyone actually believe this? Either America is stupider than I suspect (a likely scenario) or they’re lying through their teeth, and it is likely a combination of the two. Did you really just do what I think you did, America? I’m ashamed.”

I admit it… I did my holiday shopping late, but it sure did feel good because I went all out this year!

And I didn’t go to some discount store, I went top-of-the-line, brand central, the kind that carries the expensive cheeses and kumquats, and all that sort of thing.

Sure, I bought a few things that many would consider necessities, but I bought ahead of needing them, which felt luxurious.

For example, I didn’t need deodorant/anti-perspirant, I still had a couple of weeks worth of Mitchum at home. But I didn’t care… I shopped with reckless abandon and bought a new one anyway… and not the regular size either… I went ahead and sprang for the tall one.

I started in fruits & vegies, and headed straight for the pomegranate juice. Hang the expense, I thought, as I picked up the large bottle of the magical elixir. Seeing the price, $12.99, I hesitated, and for a moment I thought I’d better go for the $8.99 bottle, but then I realized… heck no! It’s Christmas!

From there I sauntered over the the berries. Sure, I was nervous… who wouldn’t be? I mean, I usually don’t even go within 10 feet of them, but this time I walked right up, picked up a container of blueberries and threw it right into my cart. Hah! I thought to myself. But I didn’t even stop there… yes, blackberries too! I almost went for the raspberries trifecta, but I saw the $6.99 price and slowly backed away from the display. You can’t always get what you want, as the man once said.

When I got to dairy and saw the egg nog… straight to the half gallon size, no hesitation whatsoever. I know, times are tough, but you have to treat yourself once and a while.

Oh, and wait till I tell you about the pasta. I bought the large size raviolis in the refrigerated section AND the matching sauce! I know what you’re thinking… No you did not! But, it’s true… I did.

And meats… I bought one of those corned beef briskets, and I picked out the most expensive one in the store… $11.97! So, how do you like me now? I was thinking at the time.

Cookies? Pepperidge Farm, baby. And not just the small bag, but the “Entertainer” box size. Girl, I haven’t had my hands on one of those in going on a decade, and I have to say that it felt so good that I almost took my cart around the store an extra time just to show them off to my fellow shoppers.

I will admit that I chickened out when it came to the bottled water. I had my hands on the Fiji stuff, but come on… I know I don’t deserve to drink water that costs that much. But I noticed the Smart Water was on sale, so at least I got water that’s smart. Oh, and I bout four bottles of the stuff, in case you were thinking: “Big deal, he probably only bought one.”

Yep, when I walked out of that store the morning of Christmas Eve, I felt like Ebenezer Scrooge on Christmas morning, carrying that giant goose to the Cratchit’s house to see Tiny Tim. Is this a great country or what?

That’s why I wasn’t surprised to see record sales this year. And I haven’t checked, but I’d bet housing has rebounded, inflation is low, the dollar is stronger than ever, manufacturing is flying high, and unemployment has dropped by a point and a half since Thanksgiving.

And I know interest rates are the lowest they’ve been in what… 1,000 years, which is nice for people with a 900 FICO score putting 60% down.

Yep, it’s right around the corner, JDA… the recovery, that is. Don’t bet against America, don’t be a doom & gloomer, and don’t be part of the ‘blame-America-first’ crowd. Soon we’ll all be singing: Happy Days are Here Again.

It’s almost 2011 and all I see are buying signals. This is when fortunes can be made by the common man. A chicken in every pot, don’t you know!

As they would say on the Left Bank: Laissez les bon temps roulez!

I’m not sure if this means anything or not, but about holiday retail activity in stores like Nordstrom… well, I live in Southern California… Orange County… the O.C. if that helps, and I took some photos of the Nordstom in South Coast Plaza, Costa Mesa, on the day before Christmas at around 7-8 PM… which I would think is one of the top shopping spots in all the land at the prime time for last day shoppers. IT WAS EMPTY. No, I don’t mean traffic was sparse… I mean I could have brought a friend with me and we could have played badminton in Women’s Shoes, or set up croquet in Children’s Clothes. There was almost no one in the store.

I’ll email them to you later…

And I’m going to email them to her too, but here’s Nordstrom at Fashion Island, Newport Beach, California… not Costa Mesa, as I incorrectly said in my P.S. above… between 7-8 PM two days before Christmas. Ā I can’t seem to figure out how to rotate the photos, so you might have to stand sideways to get the full effect, but it’s chilling no matter how you look at it. Ā This is Nordstrom in Newport Beach, a ritzy-beyond-ritzy area where Nordstrom should be packed. 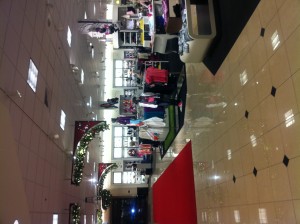 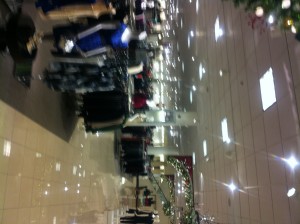 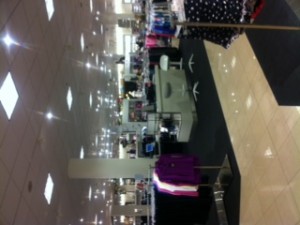 We’ll have to wait and see where the actual numbers come in… minus the Goldman Sachs spin… but I asked the clerks at Nordstrom that night and the next day at another location, and both told me that “everyone’s paying cash”. Ā And to me… that means people are spending quite a bit less. Ā But that’s just me… I could be wrong… I was wrong once.

Hey… why not take a minute and SUBSCRIBE toĀ Mandelman Matters so you’ll get it delivered to your email daily? Don’t worry, you don’t have to read it, if you don’t want to. Ā But you’ll feel better when you do!