It takes brass balls to be a banker these days and come out in opposition to writing down mortgage balances for homeowners hopelessly underwater because of “moral hazard.”  And yet, that is precisely what Credit Suisse’s global head of structured products, Mr. Dale Westhoff has done.

In January, he was interviewed for a story on Bloomberg.com under the headline: “Mortgage Principal Cuts Don’t Help Homeowners.”

The term, ‘moral hazard,” just everyone understands, is a term used in economics or finance, and it’s what can occur when one party is making the decisions about investment risk, while another party is on the hook for the losses should those decisions go awry.

You know, like if I were deciding where to invest money, but you had to cover my losses when I chose to invest in Lehman Bros. and Bear Stearns.  I’m trying to think of a good example that everyone will understand… hmmm… there must be something that would work… oh wait, I know… exactly like today’s banks… the ones that have been deemed too big to fail, and too big to jail.

Today’s too big to fail banks know that the government won’t let them follow Lehman’s path to bankruptcy, so they take on more risk than is prudent.  And when their leveraged bubble du jour pops, we-the-people spend years trying to get their gum out of our collective hair. 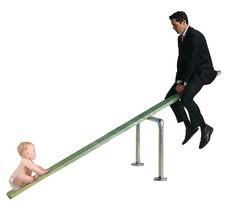 In the parlance of Wall Street, taking on risk means taking on leverage.

Leverage is Wall Street’s euphemistic word for borrowing or debt, so when a Wall Street banker says his firm is leveraged, what he means is that the firm is investing using borrowed money.  As long as the chosen investments are increasing in value, or at least can be reported as increasing in value… everything’s fine.

When the market realizes what’s happening, investors start to get nervous, so they start moving money out of riskier investments into more defensive positions, which in turn increases the risk of staying put to other investors, and at some point everyone rushes to get their money out before there’s no money there to get.

So, we invest the million dollars, and once again, we earn a 10 percent return, which is $100,000… and voila’… we’re superstars… we’ve doubled the money we’ve invested… and so we repay my uncle plus one percent interest, and then pay ourselves huge bonuses while telling each other how smart we are.

But want happens when our chosen investments not only fail to produce 10 percent returns, but their value falls by 10 percent.  If we had invested only our own $100,000, then we’d lose ten grand, lick our wounds and get ready to fight another day.  But if we had invested the million bucks that included the $900,000 we borrowed from my uncle, we’d lose $100,000… and be entirely wiped out because we only had $100,000 in the first place.

And that’s precisely what occurred in September of 2008.

The banks had derivative securities called collateralized debt obligations or CDOs that they had valued themselves using their own internal models, and then they borrowed against them.

When their value collapsed, and their payments came due… we deemed them too big to fail and invented TARP… and we’ve been inventing other, shall we say less televised ways to pump more than $16 TRILLION into those banks ever since.  It’s money that our children and perhaps our grandchildren are going to be paying back for a long time to come.

Leverage, however, is like financial crack.  Once you’ve been on it and experienced its highs, it’s hard to go back to investing money the old fashioned way… especially when you know you’re too big to fail.

The temptation must be impossible to resist because it might interest you to know that in 2011, margin debt on the NYSE climbed to its highest levels since February of 2008… right before the S&P collapsed in half.  And the only time in history net leverage has ever been higher than it is today was back in June of 2007, which was the absolute pinnacle of the most devastating credit bubble the world has ever seen.

And that, my financially minded friends, is what is meant by the term, “MORAL HAZARD.”

To Credit Suisse’s Bail Bestoff… no, that’s wrong… I meant, Dale Westhoff… we would create moral hazard were we to write down the principal balances of mortgages that are hopelessly underwater.  Dale seems to feel that if we did that, everyone and their brother-in-law would immediately start defaulting on their loans in order to get their balances reduced. 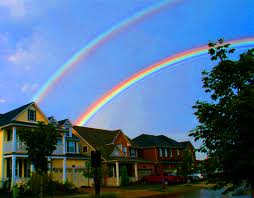 And before you knew it… we’d have… what’s the word I’m looking for… oh yeah… prosperity?  People making mortgage payments again?  An actual housing market?  Economic recovery on Main Street?  Consumer spending?  A positive GDP without fudging the numbers?  What Dale… what is it you fear, my lad?

Earlier this year, in the latter part of January, Dale told Bloomberg…

“Reducing mortgage balances is a risky idea that hasn’t been shown to keep borrowers who owe more than their property’s worth in their homes.”

Well, gosh Dale… you are obviously quite the research expert aren’t you?  That’s true, isn’t it?  Did your research point to any reasons why that would be the case?  Would you mind terribly if I were to just throw out a guess just for fun?  It’ll be like a game show…

“We’ve never done this before; we don’t know what the risk is.”

So, I guess reducing principal balances hasn’t been shown NOT to keep people in their homes either, isn’t that right Dale?  Did you forget to tell Bloomberg that part?  I see… you’re a weasel, Dale.

Suspending accounting rules is a risky idea that hasn’t been shown to keep banks that borrowed more than their assets are worth from becoming insolvent, according to Credit Slush Fund PIG.

Are you feeling me, Dale?

Here’s the thing, my boy… I think you’re the moral hazard here, would you like to know why?  Because although you failed to mention it, I happened to be doing some reading the other day and wouldn’t you know it… Credit Suisse was in a bit of news.  Nothing earthshattering or even unexpected, mind you… but news nonetheless.

Apparently, right before you made your idiotic comments about moral hazard, saying that principal write-downs won’t save homes, Credit Suisse had just won the bidding process and as a result bought $7.014 billion in face value RMBS from the Federal Reserve Bank of New York.  The Fed bought the securities from AIG and had them in their Maiden Lane II… what do you call that sort of entity… shell company?

So, when Maiden Lane II bought the assets their face value was $39 billion… and they paid $20.5 billion.  Now their face value is just over $7 billion and Credit Suisse paid… oh dear, wouldn’t you know it… the NY Fed says the actual price you guys paid won’t be disclosed until April 16, 2012.

Why is that, Dale?  Why can’t the Fed disclose how much the Credit Suisse bid was until April 16, 2012, when the sale was made on January 19, 2012?  I’m sure there’s a perfectly good reason don’t get me wrong… I’m sure it’s just something to protect the interests of U.S. taxpayers.  Always looking out for us, aren’t you, Dale?

So, I hate to even mention it, but does the fact that you guys at Credit Suisse are running around like vulture investors trying to scoop up distressed residential mortgage-back backed securities at bargain basement prices bother you at all… I mean, considering that at the same time you’re publishing supposed “research” in articles on Bloomberg like the one I’m referencing now.

See, she said that, I’m pretty sure, because she felt it would be a bad thing to have 8-10 million more distressed property sales, but it looks like Credit Suisse wouldn’t actually mind at all if there were lots more distressed property sales, since Credit Suisse is scampering about in the night buying them for pennies on the… no, that’s not right… for some undisclosed amount to be disclosed on April 16, 2012.

The suspense is killing me, Dale.  I wonder if Credit Suisse overpaid for the distressed assets they bought?  Any guesses on how it will turn out?

Care to know what else Laurie Goodman said about this topic?  Me too… she said…

“We have shown that, even controlling for all other factors, principal reductions are more effective.  Realize also that banks are doing it on their own portfolios and have been for years. Why would they continue if it was not more effective?”

Oh, Dale, Dale, Dale… so the banks have been doing principal write-downs for loans in their own portfolios for years, isn’t that fascinating?

So, it must be that principal reductions are only an effective methodology for preventing foreclosures when we’re talking about portfolio loans on a bank balance sheet.

The whole moral hazard thing only makes principal write-down ineffective when the U.S taxpayers are on the hook for the losses… and when Credit Suisse might get a chance to buy the distressed assets at pennies on the… ooops, I almost forgot… can’t tell until mid-April.

Congratulations, Dale.  As rear ends go, you have no peer.