Home  »  Four Million Homes Rise Above Water in Q4… Does anyone realize how stupid a headline that is?

Four Million Homes Rise Above Water in Q4… Does anyone realize how stupid a headline that is? 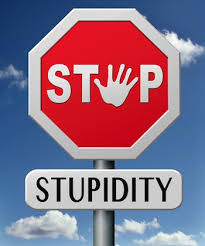 Okay, look… there’s stupid and then there’s really stupid… and then beyond that I suppose you reach the point of turn-away-out-of-embarrassment-stupid.  And that’s what we deteriorated into at the end of last week, when the dependably stupid Diana Olick outdid herself on NBCNews.com, and I’m sure elsewhere as well… but I couldn’t bear to look, or watch.

First of all, Zillow produced a report that proclaimed that four million homes were raised from underwater status in the fourth quarter of 2013, so do I have to say a lot more about that or are we good there?  I mean, go look up your home’s value on Zillow any time and tell me how far above reality the price is?  I recently saw a house in LA on Zillow at $410,000… sold for $207,000.

How about if we start a contest?  I’d love to promote the, “Sell your home at the Zillow price and win your mortgage payments for a year” contest.  It’s not like we’d need any money to do it… no one would ever win.

But, let’s forget Zillow’s propensity for quoting prices that could only be designed to help Realtors get overpriced listings.  Let’s assume some data actually showed prices on four million homes having risen out of underwater status… oh my God… no, let’s not.  That’s just too stupid an idea to entertain.

Zillow’s report says that four million came out of underwater status in 2013, but “9.8 million are still drowning in negative equity.”  Wow… we used to have roughly 14 million underwater but in 2013, a year that finished with 60 percent of sales coming from investors flush with private equity cash, we somehow managed to interpret that as having raised the prices of four million homes so much that they’re no longer underwater?  Oh yeah?  Go f#@k yourself.

How the heck does Zillow or anyone else know what the prices of four million homes are relative to their indebtedness in Q4 of 2013?  They don’t and no one else does either.  I can’t even find out the amount of my indebtedness from my bank in under a month, and by the time I receive the amount, it’s probably changed already.

But, that’s not even the point here…

Diana and the National Association of Realtors both point out that we have LOW INVENTORY.  What that means is that people aren’t selling their homes.

According to Diana’s article on NBCNews.com…

“The housing market is suffering from a severe lack of properties for sale, and much of that is due to negative equity and “effective” negative equity. The latter refers to when a potential seller does not have enough equity to afford a sale and a down payment on another home. That rate now stands at 37.6 percent nationally, according to Zillow.”

Uh huh.  So, just for fun, how much of a down payment do you suppose Zillow if figuring people need?  I’m sure they’re calculating the commissions and moving expenses, and then how much down will people need to qualify?  Well, Zillow has no idea, because no one does.  Are we talking FHA or Fannie Mae… and what kind of credit score are we assuming that 37.6 percent of homeowners have these days?

And regardless, that’s roughly 40 percent of homeowners that can’t move.  Figure another 10-20 percent that don’t want to move, right?  So, even using their fruit loopy numbers, that means that more than half of homeowners are not moving, which would certainly go a long way to not only explaining low inventory, but also low demand, right?

So, with demand cut by such an amount, how do housing prices go up so much that they take a third of the underwater homes and catapult them above water?  Don’t strain yourself… it’s not even close to possible.  Who pays Zillow and for what, that’s all I want to know.

“Effective negative equity also stunts both inventory and sales, as potential move-up buyers are stuck. A report Friday on signed purchase contracts for existing homes in January showed volume down 9 percent from a year earlier, according to the National Association of Realtors.”

So, January sales were down 9 percent year-over-year, but what about all those people no longer underwater?  Aren’t they rushing out to sell and buy?

“And the recovery in prices and equity is increasingly local. Negative equity is still high in markets with elevated foreclosure rates, such as Atlanta (35 percent), Chicago (30 percent) and Las Vegas (35 percent).”

Diana, reading your article makes me want to go outside to my car, and slam my fingers in my car door… just to make the pain stop.  The recovery in prices is “increasingly local?”  Like, before my home’s price in Southern California was somehow linked to what homes were selling for in Chicago or Atlanta?  But, “increasingly” that’s not the case?  And which parts of Chicago or Atlanta are we talking, South Side or North Side?

Las Vegas has 35 percent negative equity?  Have you been to Las Vegas?  And are we talking effectively underwater there at 35 percent?  I’d bet not.

Who cares about these numbers?  Oh wait… I know.  Homeowners desperate for good news about home values… that’s who.  They’ll believe anything, so maybe they’ll list now that the news is so good.  Yay, Zillow… the Realtor’s friend.

So, you list for $600,000 and 60 days later when your house hasn’t sold, you’ll be getting the “have to be realistic” talk: “Well, prices have softened a bit, and you know, your kitchen really isn’t what it should be… maybe we should consider bringing down the price.”

Next thing you know you’ve got an offer for $450,000 and the Realtor wants to know if you want to counter.  And by the time you sell, you’ll be lucky to be able to rent a place, let alone have the funds you need to cover a down payment.

The articles ends as follows:

“Home price gains are expected to moderate nationally this year, and some markets could even see price drops, according to the Zillow report. Negative equity is expected to rise in 26 metro markets nationwide, including in St. Louis, and to remain flat in 227 metros.”

So, what’s going to happen to all those newly above water homeowners in that sort of market, Mr. Zillow?  And what does “remain flat,” mean?  Does that mean, “fail to keep up with inflation?”  Because not keeping up with inflation means being worth less, have you thought about that you dumb cluck?

And “negative equity rising?”  Isn’t that another way of saying “prices will be falling?”

Oh, and the Realtor’s solution is for builders to keep building.  You know, to solve that negative equity problem.  That’s a great idea… absolutely brilliant.

As long as the Fed just keeps printing more money and the builders keep building more homes, as foreclosures continue unabated, and credit remains tighter than Obama’s butt in a size small Speedo… and I’m sure we’ll be in tip-top shape economically speaking in… well, never.

Look, we’ve lost 7 million homes to foreclosure.  That’s 7 million households… shall we say, 14 million people whose credit is poor.  They can’t qualify for a loan, assuming they’d want to even if they could, after what they’ve been through.

Unless we’re talking about some middle of nowhere place, chances are 30-40 percent of homeowners are underwater… maybe 60 are effectively underwater, meaning they can’t sell at a price that would allow them to buy their next home.

And when you add in the elderly, the 18-30 year olds still living with their parents or just unable to afford to buy a home, those they simply don’t want to move, such as baby boomers getting older, and those whose credit scores won’t let them move… and you tell me what percentage that leaves… 70 percent, 80 percent, 90 percent?

It doesn’t matter.  It’s a lot… way too many to create the sort of demand for housing that would cause prices to rise.

Median incomes have fallen steadily for the last five years.  Inflation has increased the prices for consumer goods by 20 percent over the same period.  Obamacare has increased the costs of health insurance for millions… the price we pay for making it available to all.  And credit is so much tighter today than in the past that it’s not even worth making a joke out of it for emphasis.

And those factors are called fundamentals… they are things that can’t change quickly.  But, until they do change, housing prices simply cannot make the giant upward swings suggested by the press-release-press pretty much on a weekly basis these days.

There’s something else to understand…

When supply is as low as it is… because no one is selling for all of the reasons above… then available homes can become scarce in some areas, and that can make prices appear to rise, when they’re not really rising at all.  Just throw a few more homes on the market and watch those prices fall fast.  Then add in the investor factor, and what you have is not a “housing market” at all.

Under conditions like this, no one could possibly know what their house is truly worth unless they sell it, and even then, it could just be because homes for sale are so scarce.  Or it could sit there as you lower the price without a single offer for weeks or even months.  You don’t know, because you can’t know.  You know you can sell your house, you just don’t know at what price.

So, no one knows how far underwater anyone actually is, Zillow most certainly included.  So, no one could know with any certainty whether last year brought four million above water either.  It’s nothing more than playing with numbers… confirmation bias… an exercise in futility… or you could call it, “My Dream Home Fantasy Game.”

Even the end of the Zillow quotes in Diana’s article stated that the company forecasts negative rising this year in 26 metropolitan areas.  How many major metros are there in this country?  I don’t know but if you told me the number was 26, I’d say okay… not that it matters because there’s no way to scientifically forecast such a thing… you don’t even know how much negative equity there is now… except to say that it’s a lot.

Scarce inventory is just a euphemism for no one is selling, and very few are buying, so the market is anything but stable as it stands.  But then throw in the foreclosure variable and the vacant houses lining the streets of cities all over the country, and to say anything overly positive about the housing market, is just someone’s way of keeping their spirits up in the face of adversity.

So, if you happen to see Diana Olick around town, just smile and give her a big hug… she obviously needs one.   And don’t tell her I said she’s stupid, okay?

Oh, never mind… forward her the link for all I care.