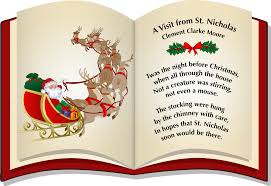 An Annual Political and Economic Year in Review by Martin Andelman

If you want to take a fun jog down memory lane, listen or read the past years of this poem… it’ll really take you back to what was happening then… and you’ll probably be surprised at how many things you’d forgotten.

‘Twas the Night Before Christmas 2012

‘Twas the Night Before Christmas 2011

‘Twas the Night Before Christmas 2010

‘Twas the Night Before Christmas 2009

‘Twas the Night Before Christmas 2008

‘Twas the Night Before Christmas 2007

It was time to consider all the things that we’d seen.

For this past year was one that I’d never forget

So, I sat down to write with a good anisette.

This year we jumped off, another fiscal cliff vote,

Then we raised the debt ceiling, to keep us afloat.

Whooping cough hit us hard, both the Mrs. and Misters,

I don’t think that has happened, since the radio played Andrew Sisters.

Then a guy named Joe Ratzinger announced that he’d retire.

Causing the Vatican to look around for a new Pope they could hire.

Which made South Korea feel anything but calm.

Scientists queried if uranium or plutonium,

And I wished that world leaders would learn to play the harmonium.

Turned government’s role, into one of endless debate.

He claimed deficit would drop, while we’d help middle class,

His speech made me want to start chewing on glass.

Leaving the Tea Party unsure of which side to disparage.

Between Dems and Reps only ill will did fester,

Why were stupid budget cuts called a “sequester?”

Unemployment down, only meant less participation.

It didn’t just correlate, it was a case of causation.

Then news about jobs, came in a barrage.

But in truth, it was only a statistical mirage.

Then chemical weapons were used over in Syria

It’s cool to kill folks with guns, but not with bacteria.

Obama vowed to take action, so he tried hard to push,

But congress refused, proving he was no Bush.

Then bombs went off in Boston, and the runners all ran,

Was it terror born here, or in Where-the-fuckistan?

Then letters to the White House came with Ricin inside,

It was clear that terrorism had yet to subside.

But a Texas plant blew up, and it seemed not to fit,

Turns out fertilizer on fire makes exploding piles of shit.

The recovery of our economy, for the rich remained quite pleasing.

For the rest, however, it was less than quantitatively easing.

Accomplishing near nothing, except for those at the very top.

Problems continued throughout the Middle Easts.

While Iran’s election ended in a centrist delegation.

Then Zimmerman down in Florida, got in Trevor Martin’s face.

He shot him dead, the media said, it was all about his race.

Jurors almost all white women, said not guilty was deserved.

It’s wasn’t a great example, of justice being served.

Manning, a man, got 35 years for WikiLeaks,

Then he said he was a woman, which turned into WikiPeeks.

Now in those states, everyone for Christmas wants a brand new glass bong.

It seems pot might become legal, at least in states not all red,

We’re not just talking glaucoma, it’s even okay with the Fed.

Many called it a law that this country needs,

Especially a guy in Texas, in jail for possessing only seeds.

I can’t recall another event of comparable government blunder.

Some say it will be better, something we all one day will like.

To others it’s an HMO designed by the Third Reich.

The Tea Party assumed control and shut our country down.

Was it really Obamacare, or cause Obama’s skin is brown.

I tried to pay attention, while remaining ore the fray.

But to be honest, I hate the premiums I’m now being forced to pay.

I guess I didn’t understand, why so many were so scared,

Of a single payer system, aren’t our seniors Medicared?

But after seeing the new law launched, I understood the fright,

How could government handle health care, if it couldn’t handle a Website?

And at last our regulators, to sue banks, formed a G-squad.

JPMorgan settled for $13 billion, after being accused of massive fraud.

As long as JPMorgan, of course, would admit to no wrongdoing.

And throughout this past year, as housing was supposedly in recovery,

But the truth on Wall Street was, dumb money was the real discovery.

Private equity raised billions, to buy homes that they could rent.

But as the year went by, they found their funds had been misspent.

The renters simply weren’t there, it was not a panacea,

Investors might have done better, making pizza in South Korea.

No, the housing market again would fall, it had not be not healed,

The Fed’s inept response would once again soon be revealed.

The problems from 2009, were the same that we now face,

The band aids that we’ve tried, were like running while in place.

Our economy still on it’s same path, you could call it degradation,

This year’s answer was to stop adjusting GDP for inflation.

And on inflation, Bernanke said, it was still low as a percent,

As long as you don’t grocery shop, buy gas, or count what’s spent.

For we all can see clearly, don’t need advice from Santa’s elves,

It’s obvious we’ve lost our ability, to effectively govern ourselves.

So, with my wife asleep in bed, and our daughter home from Cal,

And since to writing about this past year, I’d prefer a root canal,

I looked up to the sky, and I saw ole Santa’s sleigh

He was busy as he always was, bringing toys for Christmas Day.

I yelled out to Santa in the sky, I wanted next year’s projection

But he said that he could only see another typical midterm election.

He said that we’d see no real change until we’d all finally shout,

That we’d no longer tolerate the status quo, and vote those in there… out.

But I replied that this past year, I saw that there was hope,

In the eyes of college freshman, although some were smoking dope.

For they would make things change, and soon would be their time,

To take over my position, making each year’s events rhyme.

And I knew they’d do it better, than we ever could have thought,

They would not tolerate politicians, that special interests had clearly bought.

They were the future of our nation, and united they’d all say,

That the American dream is for us all, so God Bless the USA.

And then Santa looked at me and winked, as he flew just out of sight.

And as I watched my daughter sleeping, before I turned in for the night,

I knew she would always be my best work, and my personal guiding light.

And tomorrow in the morning, as we open things bought at the store,

That there’s nothing I could possibly want… just her, at home, nothing more.

So, this year I write this poem for her, to say it clear and loud,

That she’s everything I’ve ever dreamed of, and I could not be more proud.