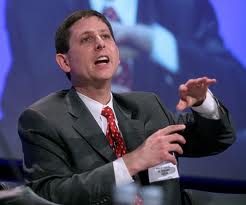 THIS IS A MUST HEAR!

In December of 2006, academic economist Phillip Swagel, after serving as chief of staff and senior economist at the White House Council of Economic Advisers and as an economist at the Federal Reserve Board and the International Monetary Fund, accepted a new job at the U.S. Treasury Department… Assistant Secretary for Economic Policy.

Phill is a very smart guy… an undergraduate degree from Princeton and both a masters and doctorate from Harvard… but he couldn’t possibly have had any idea what his next two years would be like.  His new position would not only provide him a front row seat for the worst economic meltdown since the Great Depression, but he’d be responsible for policy analysis related to the financial crisis and for something called the Troubled Asset Relief Program… or, TARP.

I the Spring of 2009, with the Obama Administration just running around talking up HAMP like it was the bee’s knees, I found out that Phill had written a paper, “The Financial Crisis – An Inside View,” and I downloaded it immediately.  Glued from page one, it helped me fill in so many blanks that would have otherwise taken forever to uncover.

Here’s your first chance to listen to Phillip Swagel on a Mandelman Matters Podcast… he’ll be back again… but you don’t want to miss this one because we won’t be going backward in time, so click PLAY below and listen to a true “insider’s view” of the worst economic meltdown since the Great Depression.

Other posts by Phill Swagel…

Were the 2008 Bailouts Justified?

The State of the Housing Market – February 2012

Taking on the Notion of Too Big To Fail.