Home  »  Weíre Being Fed a Steady Diet of Econocrap

Weíre Being Fed a Steady Diet of Econocrap 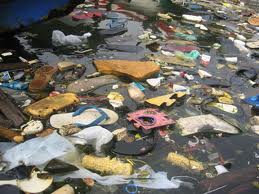 This past week started off with a thud when the Federal Reserve‚Äôs report on U.S. Family Finances showed that the median family‚Äôs net worth fell by almost 40 percent between 2007 ‚Äì 2010. ¬ÝEconomists at the Fed reported that the drop was the largest since the survey began in 1989.

Reuters had the story that I read in HuffPo.¬Ý Check out this fabulous Fed quote‚Ä¶

“Although declines in the values of financial assets or business were important factors for some families, the decreases in median net worth appear to have been driven most strongly by a broad collapse in house prices,” the Fed said.

Is any of this bothering you?

First of all, could I just ask the studio audience who I know are playing along at home, what year is this?¬Ý 2012?¬Ý I thought so‚Ä¶ just checking.

Why are we only allowed to know how far we‚Äôve dropped up until 2010?¬Ý Is there some reason, other than the fact that telling us the truth could cause mass panic, that we couldn‚Äôt have run the numbers through 2011?

And, ‚Äúthe decreases in median net worth APPEAR to have been driven most strongly by a broad collapse in house prices.‚Äù¬Ý Is that what it ‚Äúappears‚Äù to the Fed?¬Ý It appears that way, but they can‚Äôt be certain?¬Ý More research is required?¬Ý How is that possible?

That‚Äôs almost an eight percent drop over a three-year period, and if that doesn‚Äôt seem like that much to you, keep in mind‚Ä¶ that number is supposed to go UP each year. 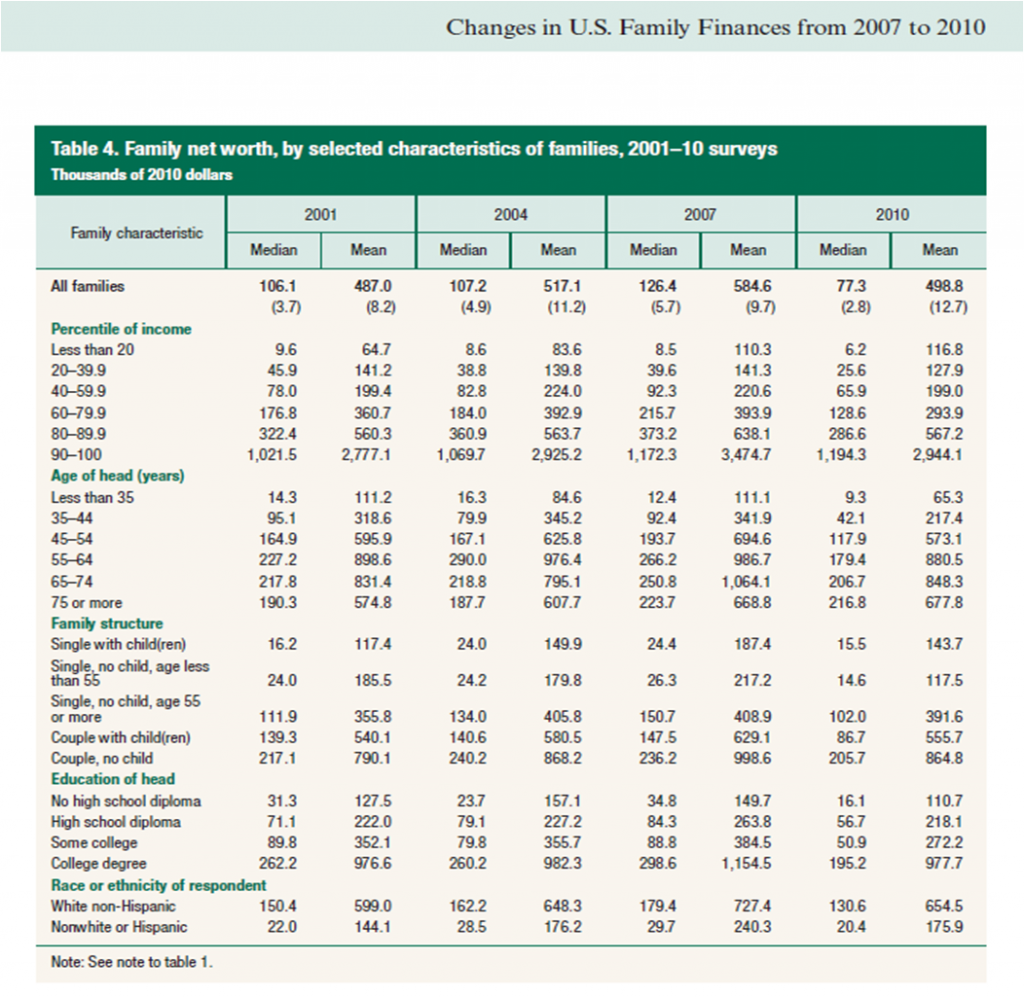 On the employment front, I can‚Äôt thank Mish Shedlock enough for posting news on this topic‚Ä¶ news on stats that I knew anecdotally there was something wrong with, but couldn‚Äôt say exactly what.

According to Mish, who is never wrong, by the way, ‚Äú100 percent of U.S. Jobs Added Since 2010 Have Been Self-Employment, Contractor, or Other Jobs Without Unemployment Insurance Benefits.‚Äù

‚ÄúSince 2010, the economy has added 3.23 million jobs according to the BLS. Of those 3.23 million jobs, 3.33 million (slightly greater than 100%) have been self-employment, contractor, family-business jobs, or other jobs with insufficient wages and therefore ineligible to collect unemployment insurance.

Since 2009 the numbers look much worse. In that timeframe the economy added 2.36 million jobs according to the BLS. Of those 2.36 million jobs, 5.91 million (250%) were self-employment or jobs otherwise not covered by unemployment insurance benefits.‚Äù

And if that‚Äôs not enough to shake you up a bit, try this on for size‚Ä¶ also from Mish‚Ä¶

Ya‚Äô think?¬Ý Didn‚Äôt we all already know this has been the case?¬Ý In one way or another, I‚Äôve been a small business owner for 25 years, and I sure did.¬Ý I couldn‚Äôt point to any proof that this was the case, but I knew it nonetheless.¬Ý I went around to business owners in my hometown a year ago and they all reported that their incomes had dropped between 25-40 percent.

‚ÄúBear in mind, that making money or receiving a paycheck is irrelevant to the BLS when they compute the unemployment rate. If you work as little as 1 hour, whether you collect a paycheck or not, you are considered employed.
In addition to the 6.21 million business owners with no paycheck, factor in those selling trinkets on EBay out of desperation and collecting a few dimes in the process.
Also factor in all those starting multi-level marketing schemes and calling it a business. How many get sucked into that losing proposition every year? Yet, to the BLS, it’s a job if you worked any hours.‚Äù

That‚Äôs just great, don‚Äôt you think?¬Ý According to the Bureau of Labor Statistics,¬Ý ‚ÄúIf you work as little as 1 hour, whether you collect a paycheck or not, you are considered employed.‚Äù¬Ý¬ÝI don’t know, but that changes the numbers that get released through the mainstream media, don’t you think? ¬ÝCombine that with the small business info above, and in that case we‚Äôre obviously doing very well economically, very well indeed.

Alrighty then… we’ll let you go back to bed then.

The certainty about housing is that it‚Äôs not at the bottom‚Ä¶. not even close.¬Ý Now, before you come completely unglued, that doesn‚Äôt mean that we don‚Äôt have pockets where things couldn‚Äôt get much worse, after all, it‚Äôs been six years of going straight down.¬Ý Detroit comes to mind, as does Las Vegas, parts of Phoenix, maybe something in Stockton, California or who-knows-where in Florida or Georgia.

I‚Äôm only talking about the rest of the country.¬Ý You know, like everywhere else.

Well, there‚Äôs the MILLIONS of foreclosures to come.

The unsold and unlisted inventory that has not, contrary to popular belief, disappeared over the last few weeks.

The fact that the 30-60 year old, buy-up buyer has essentially disappeared, since AT LEAST 50 percent of homeowners are underwater, and more than that if those who wanted to sell their homes were to list them for sale.

Umm‚Ä¶ can anyone say ‚Äútight credit markets.‚Äù¬Ý The need for 20-30 percent down payments and 760 FICO scores. ¬ÝI read that something like 50 percent of Americans have credit scores above like 740 or something. ¬ÝI’m sure that it’s true. ¬ÝThe only problem is that… how much would you like to bet me that most of that 50 percent is over 70 years old. ¬ÝAnd I just don’t see that group re-starting much of anything economically. ¬ÝI’m 51 and it’s hard to get me to buy a new shirt.

How about students graduating with six-figures in student loan debt that cannot be discharged in bankruptcy.¬Ý My daughter is going to be going to college in another year or two‚Ä¶ private universities, I‚Äôm shocked to tell you can be $57,000 a year‚Ä¶ plus room and board, books, et al.¬Ý Even public universities are in the $30k range.

There simply is not real estate market today, so we don‚Äôt even know what housing prices actually are.

A market is when the forces of supply and demand converge to set prices.¬Ý That‚Äôs not what we have today.¬Ý The only people selling their homes today are those who have to.¬Ý No one today is saying, ‚ÄúGee‚Ä¶ this seems like a good time to sell.‚Äù

And the only people buying today are those who either believe that they‚Äôre stealing something, or that think the interest rates make sense‚Ä¶ and I‚Äôm not saying they shouldn‚Äôt be buying‚Ä¶ as long as they‚Äôre buying a home and not a stock.

Prices per square foot are all showing continued declines‚Ä¶ everywhere.¬Ý San Francisco, where Facebook millionaires are made, is going down the least at 5-6 percent, year-over-year.

Plus, I wonder what will happen when interest rates finally have to rise‚Ä¶ especially to those underwater in Phoenix with adjustable rate loans.¬Ý Actually, no I don‚Äôt.

You don‚Äôt have to be any sort of real estate economist to figure this out, the market fundamentals are just plain terrible.¬Ý The only reason we‚Äôre all not climbing the walls is that this government has pumped untold trillions into our economy, but we can‚Äôt keep that up going forward, and nothing has been fixed.¬Ý Perhaps had we allocated some of that money to improving the outlook of consumers…¬Ý but we didn’t.¬Ý It went to secure the financial position of banks.

In the next two years, this country‚Äôs version of austerity will come center stage as state budget deficits all cause state legislatures to choose between bankruptcy and civil unrest.¬Ý If you were wondering when this recession would feel like a depression, stand by because it‚Äôs coming soon to a theater near you.

Now, it should go without saying that nothing bad will happen before the election.¬Ý I‚Äôm convinced that Secretary Geithner will move to Greece and start handing out Franklins in the streets before that country finally revolts and tells Germany to go pound sand.¬Ý And Spain is right behind Greece‚Ä¶ and Italy is right behind Spain‚Ä¶ and the leg bone is connected to the anklebone.

None of this is a maybe, it‚Äôs a for sure.¬Ý Water is wet, the sky is blue‚Ä¶ the fundamentals are what they are‚Ä¶ and there‚Äôs nothing on the horizon that will change them.

We need to de-leverage and there were only two ways to accomplish that:

The Obama Administration chose ‚ÄòB,‚Äô but that‚Äôs no big deal because the Republicans did too.¬Ý The fact is that the political risk associated with forgiving debt is untenable.¬Ý We‚Äôre a petty and jealous people, and if you forgive my neighbor‚Äôs debt you have to forgive mine too.

Look at Europe and you‚Äôll see the same thing.¬Ý They‚Äôve strangled Greece to death over the last three years.¬Ý They could have forgiven or restructured their debt, but they didn‚Äôt.¬Ý Because if you forgive Greece, then you‚Äôll have to forgive Spain‚Ä¶ and then what about Italy, France, and ultimately everyone else‚Ä¶ and then investors will never lend money again and we‚Äôll all die.

It‚Äôs the Stupid, Painful & Petty approach to de-leveraging, I agree.¬Ý But we have lost the ability to govern ourselves.¬Ý If there‚Äôs an iceberg ahead, we can‚Äôt swerve to avoid it, we have to hit it head on and then maybe, as the crisis ensues, we can actually fix something.

It‚Äôs been that way for a while too.¬Ý Everyone saw the S&L crisis coming way back in the late 80s, but no one wanted to tell their S&L buddies that they‚Äôd have to regulate tem for their own safety‚Ä¶ so it went BOOM!¬Ý And we got the $400 billion bill.

So, why is this happening?¬Ý Because our leaders want it to happen.¬Ý For the most part, we‚Äôre giving Congress a complete pass on this stuff.¬Ý Blame the banks for the failure of a government program‚Ä¶ perfect.¬Ý Oh, I‚Äôm not saying they shouldn‚Äôt be blamed for many things, but Fannie and Freddie drive the mortgage market, and their driving it straight off a cliff.

Any Questions?¬Ý Actually, I Don‚Äôt Have a Single One.

Overall, the point I‚Äôm making is that I don‚Äôt really care that the government wants to pay Scrabble-type word games with the word ‚Äúrecession‚Äù or ‚Äúrecovery.‚Äù ¬ÝI don‚Äôt care how they want to screw around with the unemployment rate by not counting some folk and over-counting other.

Whatever they want to call this economy, I have my own choice words for it‚Ä¶ they aren‚Äôt appropriate for mixed company‚Ä¶ and they aren‚Äôt going to change next month, next year, or for a long time.