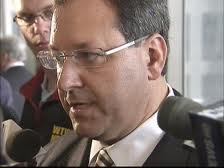 The Wall Street Journal is reporting that the negotiations between remaining state attorneys general and the big banks over issues related to the foreclosure practices employed by the banks’ mortgage servicing operations, are nearing an end.  According to the WSJ, $19 billion settlement is near… in fact, the Journal makes it sound imminent, although the paper does concede that delays could result from no agreement as to who should be appointed to monitor the agreement.

Let me guess… the bankers want appoint Jon Corzine as the monitor, while the state AGs are proposing a banker whose ponzi scheme or insider trading scandal hasn’t yet made headlines.  Gee, I can’t wait to see how this turns out.  Don’t you wish the negotiations were on C-SPAN?

(It has been reported that Sheila Bair’s name came up for potential monitors, but she turned down the job saying she has other commitments.  It’s really still only a rumor at this point, but I’ve been told that those commitments include a standing Thursday morning with a nail salon and a pilates class.)

I want to be very clear about something here… this entire thing is just astonishingly stupid, and what’s most amazing is that there are functioning adults involved… I mean adults that can do things for themselves… like tie their own shoes, cross streets at the crosswalk… things like that.  I’ll tell you why this is the case in a minute… and it’s not my opinion… it’s the fact of the matter.

I decided that the best person to ask about what’s going on with these positively inane negotiations would be a former State Attorney General, so I called Ohio’s former AG, Marc Dann.  Marc knows these people, he understands the process, and he’s heard some of the inside scoop, so you don’t want to miss this Mandelman Matters Podcast… I promise you that.  (Scroll down and you’ll find the PLAY button.)

But meanwhile… let me just say a couple of things about what’s going on here… and correct the facts that the WSJ got wrong… or embellished… embroidered… or just were misleading about.

First of all, the WSJ refers to the negotiations as “months-long.”  That’s a true statement, but it sure is a funny way to phrase a time period that’s just one month shy of lasting ONE YEAR.  It’s like describing the amount of time that elapses between my birthdays as having been “months-long.”  In point of fact, HousingWire reported the following on January 26th, 2011…

“Iowa Attorney General Tom Miller told more than 200 homeowners and consumer advocates in a meeting Tuesday that the investigation into foreclosure practices at major lenders is drawing to a close, and that negotiations will begin soon.

Major lenders froze foreclosures in October when employees were found to be signing affidavits en masse and without a proper review of the files as required by law in some sates. Miller and the other 50 state AGs along with seven federal regulators launched an investigation into what is now known as the robo-signing scandal.”

Secondly, the WSJ refers to the settlement as relating to “alleged foreclosure improprieties,” and it’s the sort of description that took me back to the Fall of 2006, when evidence of Republican Congressman Mark Foley’s attempts to molest several under age boys working as White House Pages was made public by ABC News.   Lest you forget, Foley was the staunchly anti-gay legislator who, as it turned out, was a sexual predator who hunted young boys.

On October 5th, ABC News reported  that in 2002, Foley e-mailed one 17 year-old male page with an invitation to stay at the congressman’s home in exchange for oral sex… the page declined the offer. The same report also stated that Foley e-mailed another under age male page requesting a photograph of his erect penis.  Another former page reported that he had seen sexually explicit e-mails sent by Foley to “three or four” other pages from that same class.  Foley’s office ultimately confirmed that Foley had in fact sent the messages, before he slinked off to rehab.

And then, on one of the Sunday morning shows I watched Newt Gingrich and White House spokesman Tony Snow describe Foley’s conduct as being nothing more than “naughty e-mails,” which is a lot like the WSJ referring to the banks’ “alleged foreclosure improprieties.”

Alleged?  There’s nothing alleged about AT LEAST hundreds of thousands of fraudulent affidavits, forgeries of Linda Green’s name, among dozens of others.  For heaven’s sake, the whistleblower in Nevada recently committed suicide… or something… after blowing the whistle on Lender Processing Services as a robo-signing Mecca, if you will.

Additionally, the State of Nevada passed a new law that makes it a felony and threatens to hold individuals criminally liable for making false representations concerning real estate title. Under the new law, individuals are also subject to civil penalties of $5,000 for each violation.  And what happened as a result?  Well, for one thing, foreclosure filings fell by roughly 80% in month one following the new law’s passage.

And do I even need to talk about the Registers of Deeds, like Jeff Thigpen of North Carolina, and John O’Brian of Massachusetts?  But, the bank-friendly folks at the WSJ, want us to think of the banks being forced to pay out $19 billion because of “alleged foreclosure improprieties.” Hardly seems fair, right?  I wonder if the bank PR team masquerading as journalists over at the WSJ understands that were they to have done what the banks did, just a couple of times, they’d be in jail right now.

And yet, the WSJ story does it over and over again… here’s the second reference, found in the article’s third paragraph:

“The talks center on the banks’ use of “robo-signing,” in which employees approved legal documents without proper review, and other questionable foreclosure practices.”

The only thing “questionable“ surrounding this discussion, is the way the WSJ reporters apparently view massive fraud and the rampant use of forgeries when kicking people out of their homes… after lying to them about their intent to modify their mortgage payments.

Thirdly, the WSJ story goes on to explain that without California’s AG, Kamala Harris, participating in the deal, the settlement amount is to be $19 billion… with Harris’ going along with the flagrant whitewash, it would have been $25 billion.  The Journal says the  amount is to fund…

“The dollar value of the deal would include the value of principal write-downs, interest-rate reductions and other benefits to homeowners as well as cash penalties.”

All that for $19 billion, huh?  Wow… somewhere there must be a sale on principal reductions and cash penalties, because $19 billion on my calculator doesn’t go very far in that regard.  In California alone, there are more than 2 million people in foreclosure, and if we gave them all a principal reduction using the $19 billion settlement, they’d each get $9500.  Of course, that wouldn’t leave any funds to cover the interest rate reductions, cash penalties, or “other benefits,” unless by “other benefits,” they mean that the homeowners will be deemed “eligible for HAMP,” or something that costs about the same amount.  Nor does it leave even a nickel for anyone in the other 49 states.

In case it’s not yet seeming “STUPID” enough to you…

Fourth, here’s how the WSJ describes the expectations of the administration and the bankers involved in the negotiations…

“Administration officials have viewed the foreclosure settlement as a chance to break the foreclosure logjam, increase the number of reductions in loan principal and provide other assistance to homeowners. Banks, meanwhile, would like to reassure investors and put questions related to foreclosure practices behind them.”

Really?  Who in the Obama Administration specifically has been viewing the proposed $19 billion settlement that way?  I’m serious… I want to know who.  Names… name names, because obviously they are entirely innumerate, and I’d be happy to get a math tutor over there right away at my own expense.  Seriously… I’m happy to do it… just tell me which member of the president’s cabinet didn’t finish 5th grade math, and I’ll take care of it right away.

Fifth, the WSJ story wraps up by explaining that the “negotiators are still are ironing out details to determine what additional legal claims prosecutors could bring once a deal is signed. Under the proposal, banks would be released from legal claims tied to servicing delinquent mortgages as well as certain mortgage-origination practices, but government officials still would be able to pursue claims related to the packaging of mortgages into securities.”

And then the WSJ closes its story of how a settlement between the bakers and state AGs is essentially imminent with the following sentence:

“Even if a deal in principle is reached, the formal announcement of the agreement could be delayed until January. Once a deal is agreed to, it is likely to take a month or two for the legal language to be finalized, people familiar with the discussions said.”

Well, alrighty then… in other words, there’s no deal anytime soon, and in fact there may never be one.  Is that what you were trying to get at, WSJ reporters, Ruth Simon, Nick Timiraos, and Dan Fitzpatrick?  And, three of you were needed to write this bank brochure of an article?  Why?  Was it that one of you started it, but soon found that you needed the fingers and toes of the other two to handle the math?  No, wait… it can’t be that because you guys didn’t do any math.  Ooops, my bad.

Okay, so is it STUPID enough for you yet?

Now, click the PLAY button below and listen to Ohio’s former Attorney General, Marc Dann, as he provides us with a window into the negotiations between the remaining AGs and the banksters.

If after listening to this podcast, you feel that you want to voice your views n this sham of a settlement proposal, as Marc Dann suggests would have an impact, click HERE to link to the home page of the National Association of Attorneys General.  You’ll see a map of the U.S. on the home page… just scroll over the little boxes and you’ll get your state AG’s contact information.  Come on DOERS… DO IT!  Stop the madness.