Home  »  Register of Deeds, Jeff Thigpen, Is Not Playing Around – A Mandelman Matters Podcast

Register of Deeds, Jeff Thigpen, Is Not Playing Around – A Mandelman Matters Podcast 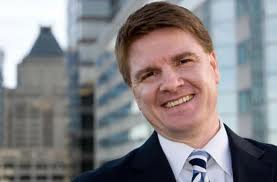 Jeff Thigpen is the Register of Deeds for Guilford County in Greensboro, North Carolina. Â The way he explains it, he has two primary responsibilities: 1. To protect the chain of title when property changes hands. Â 2. A fiduciary duty to collect recording fees. Â And the fact is that MERS has pretty much blown a hole right through both of those things.

But, you see… Jeff is not your ordinary Register of Deeds. Â Like his counterpart John O’Brian in Massachusetts, Jeff takes his job pretty seriously, which makes sense since his job has been around for some 300 years. Â And so he put his foot down… right on top of MERS.

â€śFor me, the question is clear. Do we want land recordsÂ in America to be governed by major banking conglomerates on Wall StreetÂ or the people and laws of the United States of America?â€ť

Well, I caught up with Jeff after receiving a “friend request” from him on Facebook… I recognized the name right away and sent him a note asking him to join me for a podcast… and he said yes, of course. Â a Mandelman Matters podcast is THE place to hear and be heard, don’t you know.

And on a serious not, I truly believe that EVERY SINGLE ADULT in America should listen to what Jeff says on this podcast… I mean it… it’s not just about foreclosures… this affects everyone in the country… 300 year old property rights laws. Â From talking to Jeff, I now realize what a big deal this mess is as far as robo-signing and MERS goes… we simply cannot allow the banks to gloss over these issues with statements like “sloppy paperwork.” Â It’s a whole lot more meaningful that that, as Jeff will very clearly exaplain.

So, please pass it along to other homeowners you know… they need to hear it whether they’re at risk of foreclosure… yet… or not.And her we go… it’s Jeff Thigpen from North Carolina… just click the PLAY button below, turn up your speakers and tell me what you thought when it’s done… I just know you’re going to like it a whole lot.

I have to tell you, I sure did enjoy talking to Jeff… he’s the kind of person we need in government today… and if he ever decides to run for office… I’m volunteering to run his campaign.