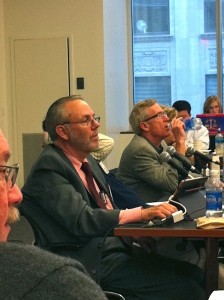 So, I’m sitting in a classroom at New York Law School, attending Max Gardner’s UCC-focused seminar. Ā It’s my second time going through this program, I was also at the last one, which was held at the University of La Verne Law School in Southern California back in September.

But you know me… I just cannot get enough in-depth presentation and discussion on the infinite number of nuances involved in the interpretation of Article 3 or Article 9 of the Uniform Commercial Code as applied to how notes are transferred or assigned. Ā I get goosebumps just thinking about it. Ā You know… some people like sports… others are into fashion… but me… heck, give me a room full of lawyers debating an arcane area of the law every single time.

Luckily, we’re on the 5th floor, so as soon as I post this, I plan to practice my swan dive. 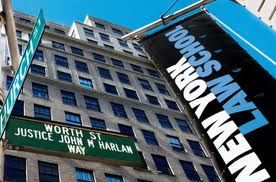 Actually, I’m just kidding… anything Max does is always more than worth showing up for, and I’m learning a lot more this time around than last. Ā Last time I sort of showed up looking for the answer sheet, but this time I’m paying closer attention to the details because I’m starting to understand that it’s very likely the next frontier in the fight for homeowners.

The Permanent Editorial Board of the Uniform Law Institute (you know what that is if you listened to my recent podcast with attorney Thomas Cox), has just a few days ago published a paper rendering an opinion on the Article 3 v. Article 9 debate. Ā I called Max the day it came out and he said it does support his view… which is that it’s Article 9 that applies, and not Article 3. Ā Of course, the banksters say it’s Article 3, so that means… actually, I have no idea what that means… check back with me after tomorrow.

So… if you’re wondering why I’m writing this right now, as education is raining down all around me? Ā Well, it’s because this is like being at the All-Star Game of the foreclosure crisis. Ā It’s just packed with high profile lawyers and rock star bloggers… it’a really quite incredible. Ā The people in this room are many of the same folks you read about fighting for the rights of homeowners, or writing about the tragic and corrupt nature of the crisis.

First of all, my new partner-in-stopping-crime, Abigail Field is here, so we got to hang out and plot to fix the world. Ā We’ve been working together on several new things over the last few months… you’ll hear a lot more about them soon enough… but since she lives in New York we’ve been spending hours on the phone getting to know each other’s style and planning future efforts, so it’s been great to sit across the table and talk face to face. Ā That’s her below on the left. Ā Her mother, Paulann Sheets,Ā is on the right and she’sĀ a Boot Camp graduate lawyer who represents homeowners in Connecticut. Ā (I actually met PaulannĀ last fall… we both went through Max’sĀ Boot Camp the same week.) 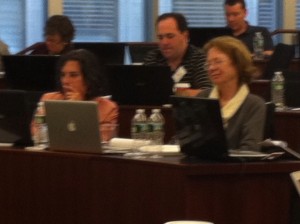 Judge Arthur Schack is here… as a speaker, and as a member of the panel for the entire weekend. Ā Judge Schack is definitely a judge who gets it. Ā He has stopped quite a few foreclosures from proceeding as a result of faulty or fraudulent paperwork being submitted. Ā One of his more famous cases involved a foreclosure attempt that was reported to have occurredĀ on Christmas Eve, but in truth, it wasn’t reported correctly.

What actually happened was that Judge Schack refused to allow a foreclosure brought by US Bank to proceed because US Bank’s lawyer had stated under oath that she had communicated with an officer of Downey Savings on Christmas Eve, 2010… and that would have been very difficult to have done, because Downey was long gone by then… it was acquired by US Bank in 2008. Ā So,Ā in his written opinion, when referring to the paperwork the bank presented, the judge used the phrase, “Bah Humbug.” Ā The media misread the facts and reported the story as if the foreclosure had been stopped on Christmas Eve.

Judge Schack explained the whole thing to me… heĀ used the phrase “Bah Humbug” in his written opinion because of its literal meaning, which is: “something designed to mislead or deceive.” Ā But he wrote that opinion on August 11, 2011… the foreclosure itself had nothing to do with the Christmas holiday. Ā From that opinion…

āMs. Carucci affirmed under the penalties of perjury that she communicated on Christmas Eve 2010 with the officer of a defunct financial institution,ā Schack wrote. āThis is a deceptive trick and fraud upon the court. It cannot be tolerated. This Christmas Eve conduct, in the words of Ebenezer Scrooge, is āBah, humbug!ā

I interviewed Judge Schack one-on-oneĀ in his office on Monday (or would that be “in his chambers”), before I left town, so look for an upcoming podcast with one of the judges that truly understands what’s going on today… and what shouldn’t be allowed to go on today. Ā He’s a real hero to many homeowners, and it was myĀ privilegeĀ to spend time with him on this trip. 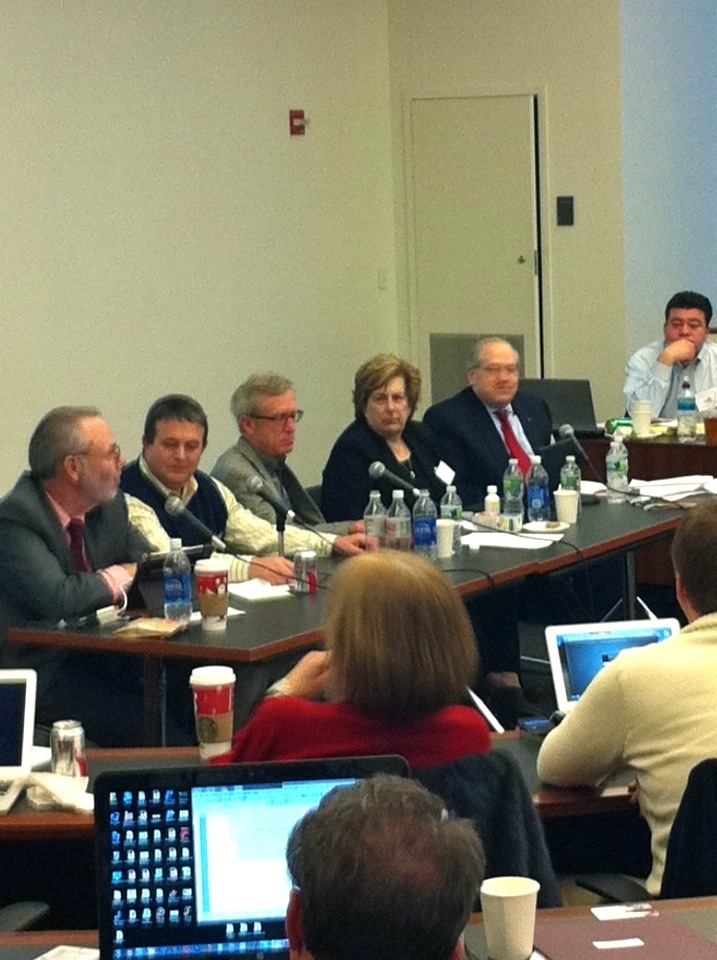 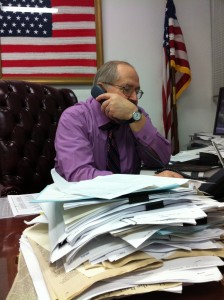 And here’s Judge Schack while I was interviewing him at his office, or in his chambers, I really don’t know which is right. Ā I found him to be a very smart and eminently reasonable person. Ā The kind of person that absolutely should be a judge. Ā We were talking and it was getting late, so he’s on the phone calling the officers downstairs to make sure that I can get out of the building… lol.

Below is a shot of most of the class. Ā There are so many famous lawyers and bloggers here, I couldn’t possibly list them all… it was quite a group to have in one room discussing legal strategies, that’s for sure. Ā The guy with the silver crew cut in the foreground is attorney Ā Mark Malone. Ā Linda Tirelli is the blond halfway down on the right. Ā But lawyers aren’t the only famous folk here. Ā See the red sweater just to the right of a guy in a pink shirt… recognize her? Ā Okay, I’ll give you a clue… Yves here. 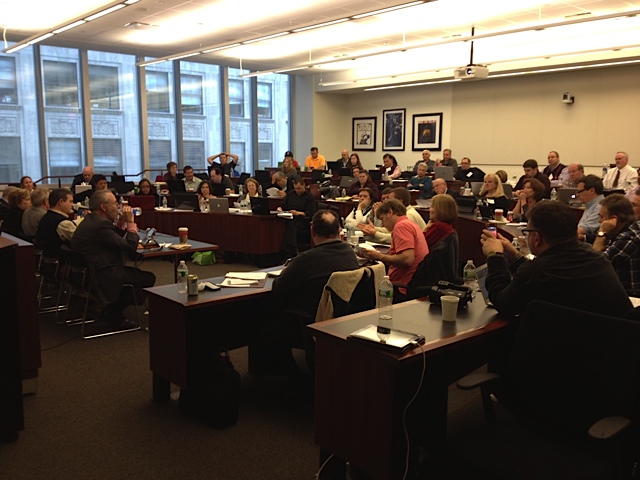 Yes, that’s Yves Smith of the blog,Ā Naked Capitalism. Ā Also, in the pink shirt is Matt Stoller, who is the former Senior Policy Advisor to Rep. Alan Grayson and who also writes on Naked Capitalism, was here with her, as well. Ā Abigail and I got to spend quite a bit of time with Yves and Matt, discussing strategies for advancing our various causes, and we all went out to dinner as well, along with with Max, the judge, and numerous others attending the weekend seminar. Ā It was quite a group… very smart people with very strong views… but, lucky for me, I’m not shy… and neither is Abigail, by the way. 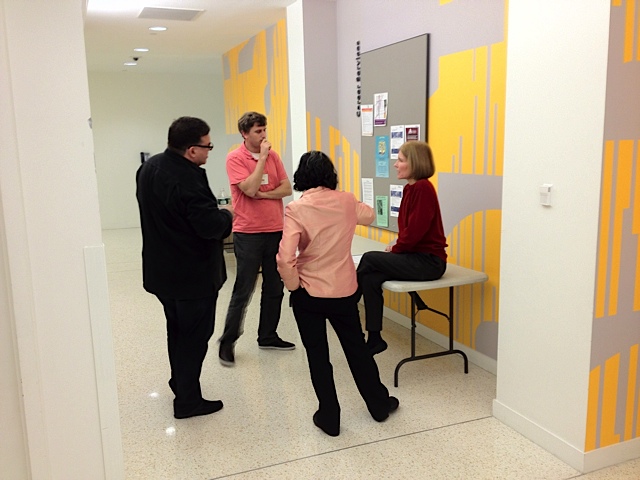 That’s Abigail Field and me plotting to fix the world with Yves Smith and Matt Stoller.

Below is attorney Glenn Russell, one of the lead attorneys from last year’s Ibanez decision rendered by the Massachusetts Supreme Judicial Court. Ā Glenn and I have been friends-on-the-phone for a couple of years now… so it was great to put a face with the voice… look for a podcast with him coming soon for sure.

Glenn Russell in the foreground and up and to his left is attorney Thomas Cox, who brought “robo-signing” into our country’s lexicon after deposing Jeffrey Stephan of GMAC. Ā I recently posted a podcast with Tom and if you haven’t already listened to it, you can find itĀ HERE. 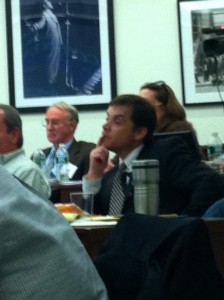 That’sĀ John Schoen from MSNBC below. Ā I had the opportunity to speak with John and found him to be a bright guy who seemed to have his heart in the right place. Ā Although, if you want to know something embarrassing… I had forgotten that I once featured John in one of my “Bringing Up the Rear” columns… Ooops… and I thought your name sounded familiar… just couldn’t place it, but now I remember. Ā Well, the important thing is that John seems to have gotten better since then. 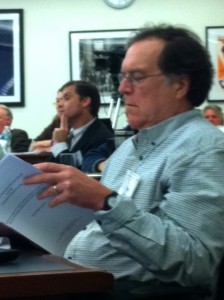 And sitting to John’s left, below, is Marie McDonnell, who is probably the best in the field of mortgage fraud and securitization research, not that Jay Patterson isn’t also very good… but Marie handled the work used in the Ibanez case, among others, so her work has become very well known. Ā I’ve known Marie for over a year now, and we’re meeting for breakfast tomorrow morning, so expect a podcast with her soon as well. 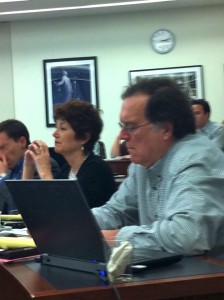 Below is New York attorney Linda Tirelli, who is very active in the foreclosure defense and bankruptcy legal communities. Ā Linda has been in the news quite a bit, including being interviewed by CNN for their story, “The Face of Faulty Foreclosure,” and by Reuters in their story, “Foreclosure Crisis Fallout.” Ā (Both are very much worth watching, in my opinion.) 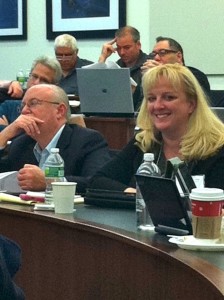 So, that’s about it, as far as this past weekend at Max’s UCC-focused seminar in New York City goes. Ā I will be writing more about the UCC Article 3 v. Article 9 debate soon… as soon as Abigail and a few others explain more to me… it’s a very technical argument and I don’t want to write anything that could confuse or misinform anyone.

Overall, it has to do with theĀ key rules in the Uniform Commercial Code that govern the transfer,m ownership and enforcement of mortgage notes secured by aĀ mortgageĀ on real property, which areĀ primarilyĀ governed by two Articles of the UCC… Articles 3 & 9.

If the mortgage note is a “negotiable instrument,” thenĀ Article 3 provides the rules that govern the obligations of parties on the noteĀ and the enforcement ofĀ those obligations. Ā But, in cases involving either negotiable or non-negotiable notes, Article 9 of the UCCĀ provides rules as to how ownership of such notes may be transferred, theĀ effect of the transfer of ownership of the notes on the ownership of the mortgages thatĀ secures those notes, and under which circumstances the transferee has the right to record its interest in the mortgage in the applicable real estate recording office.

The UCC, however, doesn’t resolve all of the issues in this area, becauseĀ foreclosure is primarily the province of a stateās real property law, so it’s another one of those things that you ask a lawyer and he or she responds by saying… “It depends.”

In closing, I just want to say to the attorneys reading this, that I’ve personally attended Max Gardner’s Securitization and Bankruptcy Litigation Bootcamp at his 160-acre ranch in the western mountains of North Carolina, and quite frankly, I don’t think there’s a professional educational experience anywhere that could claim to be its rival. Ā If you haven’t attended Max’s Boot Camp, and want more information, click the link above and you’ll find answers to most of your questions. Ā And, although I’m not positive, because it may already be sold out, I think there is one more Boot Camp available this calendar year… I believe it starts on December 8th. 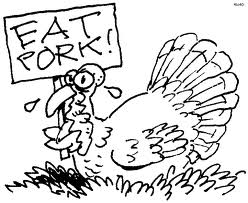 And… from the bottom of my heart… thank you Max… for inviting me to attend this past weekend. Ā I’ll never forget what you and the lawyers in your “army” have done and will mostĀ assuredlyĀ continue to do for America’s homeowners… and for this country as a whole. Ā I literally do not know what we’d all do without you.

I’ll call you tomorrow, but in case we don’t connect… and to all the others that were there in NYC this past weekend… I hope you have a wonderful Thanksgiving holiday… I’ll be giving thanks for all of you, and saying a prayer for your future success.