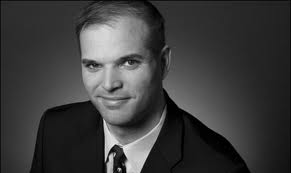 I admit it‚Ä¶ I‚Äôm no different that most everyone else‚Ä¶ I‚Äôve got a crush on Matt Taibbi of Rolling Stone.¬Ý In case you‚Äôre unaware, Matt writes about many of the same topics I tackle on Mandelman Matters, except he‚Äôs younger than me, gets to swear like a sailor in his articles when he wants to, shows up on Bill Maher‚Äôs show now and again, lives in or near Hoboken, New Jersey, which is right across the Hudson River from Manhattan, and in general appears to have my dream job.

His recently published book, Griftopia, was one of my favorites of the past year‚Ä¶ after reading the first seventy pages while in bed, I threw my copy onto my bed and said out loud‚Ä¶ to no one but myself‚Ä¶ damn it, he might just be funnier than me.¬Ý And for a moment, I questioned why I would ever write another word now that Matt was on the job.¬Ý I‚Äôve since reconsidered, however, coming to the conclusion that while he is in fact clever, and occasionally even laugh-out-loud funny, he‚Äôs not definitively funnier than I am, and never breaks into show tunes in the middle of articles on the financial crisis that I‚Äôve seen, so I‚Äôm going to continue my soir√©e with the printed word. Matt‚Äôs also a relative newcomer to the financial and foreclosure crises, at least compared with me, but he does what he does for a living and obviously has resources that allow him to do some real investigative reporting, so when a reader of mine emailed me an excerpt from one of his recent articles, and the headline spoke of Wall Street ‚Äúhousewives‚Äù receiving $220 million from the Federal Reserve during the now infamous rich-guy-and-banking-buddy-bailout, well‚Ä¶ I felt compelled to take a look at what Matt was describing‚Ä¶ and I now wish more than anything that I hadn‚Äôt.

Just a few short days back from vacation and after reading Matt‚Äôs article, all I want to do is scream at the top of my lungs until I pass out.

You see, Congress has recently forced the Federal Reserve to at least partially open its books and allow the American people to see where some of the trillions in ‚Äúbailout dollars‚Äù actually went.¬Ý As Matt says in his Rolling Stone article of April 12th:

‚ÄúIt is as though someone sat down and made a list of every individual on earth who actually did¬Ýnot¬Ýneed emergency financial assistance from the United States government, and then handed them the keys to the public treasure. The Fed sent billions in bailout aid to banks in places like Mexico, Bahrain and Bavaria, billions more to a spate of Japanese car companies, more than $2 trillion in loanseach¬Ýto Citigroup and Morgan Stanley, and billions more to a string of lesser millionaires and billionaires with Cayman Islands addresses.‚Äù

Well isn‚Äôt that just great to hear?¬Ý Our government officials‚Ä¶ our best and brightest, one would certainly hope‚Ä¶ spent a relative dollar ninety-five on stopping the foreclosure crisis that continues to stalwartly impede any sort of economic recovery from mattering to anyone but our Wall Street bankers, and about as much to stimulate job creation to any significant degree.

But, we did help out the rich people and propped up our financial institutions, not to the point of their being able to re-start any real amount of consumer lending, but at least to the point where the Street‚Äôs bonuses are as egregious as ever.¬Ý Absolutely crackerjack work is all I can think of to say, now can we please start making sense again?

Well, Matt‚Äôs story is titled, The Real Housewives of Wall Street, and it asks the question:

‚ÄúWhy is the Federal Reserve forking over $220 million in bailout money to the wives of two Morgan Stanley bigwigs?‚Äù

Here‚Äôs an overview of what Matt‚Äôs referring to, you‚Äôll have to read his article in order to really become near suicidal or prone to acts of random violence.

Apparently, back in 2009, Morgan Stanley‚Äôs CEO, John Mack and his wife decided to purchase a $13.5 million property located on Manhattan‚Äôs tony Upper East Side, a 107 year-old limestone carriage house with an indoor 12-car garage, recently sold by the Mellon family of Robber Baron fame.¬Ý At the time, Mr. Mack was earning just $800,000 a year in salary, and was declining to award himself a bonus in what was the midst of the worst financial crisis in 70 years.

Now, I assume Mack had plenty of cash with which to buy the property, although I really don‚Äôt know the details of the transaction, but I‚Äôm thinking $800,000 a year isn‚Äôt enough income to shoulder a $13.5 million mortgage.¬Ý No matter, John Mack and his wife Christy together did purchase the inner-city estate so good for them. ¬Ý(That’s it, just below.) Matt Tiabbi describes Christy Mack as being: ‚Äú‚Ä¶ thin, blond and rich ‚Äî a sort of still-awake Sunny von Bulow with hobbies. Her major philanthropic passion is endowments for alternative medicine, and she has attained the level of master at Reiki, the Japanese practice of palm healing.‚Äù

Two months before the Macks purchased their Manhattan carriage house with indoor parking for 12 cars, it seems that Christy and her friend Susan, neither of which appear to have any background or education in finance, launched a new investment enterprise that would invest in student loans and commercial real estate, calling it ‚ÄúWaterfall TALF.‚Äù

The two Wall Street wives put up $15 million to set things up, and then they received $220 million in CASH from the bailout programs being offered by the Federal Reserve, most of which they used to buy student loans and commercial mortgages.

The loans from the Fed provided that Christy and Susan would keep 100 percent of any gains on their investments, while the Fed and the Treasury‚Ä¶ as in, taxpayers‚Ä¶ would cover 90 percent of any losses. ¬ÝThe arrangement was made as part of a bailout program that was sold as being designed to help Main Street by stimulating consumer lending.

So, the strategy now seems quite clear: Our government decided to address the financial crisis and economic meltdown by handing out hundreds of millions to the wives of Wall Street executives so they could invest in student loans and commercial mortgages on a risk-free basis.

See‚Ä¶ when you say it like that it doesn‚Äôt sound nearly as stupid as it did a few minutes ago.¬Ý NO‚Ä¶ WAIT A MINUTE‚Ä¶ yes it does‚Ä¶ it‚Äôs the dumbest idea in the history of the world, a complete abrogation of our democracy, and if there‚Äôs any justice in the world, those involved will be violently gang raped in prison every day for 50 years, or stricken with palsy. The TALF bailout program was created just after Obama was elected with the stated purpose of stimulating consumer lending, but instead of just lending the money to consumers, our government‚Ä¶ and yes, I‚Äôm talking about the Obama Administration here‚Ä¶ decided to give the money to the same irresponsible greedy bastards that caused the crisis in the first place so they could lend it to consumers at a huge profit‚Ä¶ essentially risk-free.

And the real beauty of TALF is that it doled out dough in the firm of NON-RECOURSE LOANS‚Ä¶ the kind you don‚Äôt really need to pay back, unless it‚Äôs profitable to do so.¬Ý You get your money from the Fed, you buy your student loans and commercial mortgages, which you transfer to the Fed as collateral for the loan you just got from the Fed.¬Ý If your investments go down in value, you don‚Äôt re-pay the Fed, you just walkaway from the loans you invested in and send the bill to the taxpayer.

Of course, it should go without saying that if your investment increase in value, why then you take your investments and cash them in, repay the TALF loan you got from the Fed, and pocket the difference.¬Ý Neat-O, don‚Äôt you think?

While all of this financial engineering has been going on‚Ä¶ accomplishing nothing‚Ä¶ people are losing their homes to foreclosure every day and in record-breaking number because servicers are inept and uncaring on a scale historically reserved for our enemies during times of war.

Our government‚Äôs incompetence in dealing with the foreclosure crisis has become so apparent and consistent that essentially no one believes that the administration or the legislature has the slightest idea what‚Äôs happening, why it‚Äôs happening, or what to do about it.

And yet, as I write this‚Ä¶ we don‚Äôt even have a program on the drawing board that could potentially stop the free fall in the housing markets that continues to erase roughly $10 trillion in consumer wealth each year.

But, I think it was last week or the week before that our government was consumed by a debate about a miniscule amount of federal funding for Planned Parenthood, and now we‚Äôre about to start another 18 months of presidential election circus politics, during which time nothing substantive will be accomplished and millions more will lose homes, leaving behind nothing but vacant and rotting structures emblematic of losses all around.

Is this state of affairs okay with anyone?