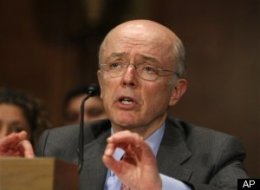 Remember years ago how people who worked for the federal government didn’t make a lot of money or, at least generally speaking, have a lot of money? Â Like, they were public servants and only after someone left their government job, then he or she might get a job in the private sector and start making a few bucks. Â I remember those times. Â And I’m not at all sure when they ended, to tell you the truth, but they sure seem to have ended, and I’m starting to think that it’s affecting how things go in this country.

Herb Allison, who was the Assistant Treasury Secretary under Geithner, and headed up the $700 billion TARP bailout fund, followed a slightly different path, and look what happened there.

Herb started out with a B.A. in philosophy from Yale University, which is… oh, I don’t know… funny to me. Â A Yale philosophy major? Â I really didn’t know they made those. Â Maybe it was the philosophy of money and he minored in inheritances? Â From there Herb did an MBA at Stanford, but big deal… I did my MBA at Pepperdine and although perhaps at one time, I knew my way around Â an HP 17B II, today I can barely balance my checkbook.

Herb then spent 28 years at Merrill Lynch, including a stint as Director of Human Resources, where I’m sure his background made him an excellent choice for explaining the companyâ€™s health plan to a bunch of financial advisors. And after that, he became National Finance Chair for John McCainâ€™s first failed presidential campaign.

Between 2003-2005, Â Herb somehow managed to become director of the New York Stock Exchange. Â Now, I don’t remember these being particularly challenging years at the NYSE,Â so the place probably pretty much ran itself, I would think, because overlapping with that responsibility, from 2002 to 2008, Herb was the shiz at TIAA-CREF. Â These were some very rough and tumble years for those inÂ the financial services industry,Â so all in all… very nicely done there.

And, to round it all out, Herb had a cup of coffee at the helm of Fannie Mae back in 2008.

So, what else would you expect someone with that kind of resume to do next? Â Manage the $700 billion TARP bailout fund? Â Why, that’s right… that’s what I would have guessed too.

You remember the TARP… the $700 billion decoy bailout fund that had absolutely no accountability built right into it? Â We handed the money over and then weren’t even allowed to ask where it went or what anyone did with it. Â Without question, the least transparent tax-payer funded fund in the history of the world. Â All we really know is what it wasn’t used for… it didn’t buy the toxic assets off of the balance sheets at our too-big-to-fail financial institutions. Â Yep, that TARP. Â I wonder what that job is like, managing a fund that no one reports on, asks about, or even knows where was spent.

When Herb announced he was stepping down last fall to return to his home in Connecticut, Herb said that TARP, or the Troubled Asset Relief Program for long, was a proven success… and I don’t see how anyone could have a basis upon to which to challenge that statement, since we’re not allowed to know where it went or for what it was used. Â He also said that the bailout fund stabilized the nation’s financial system and laid the groundwork for an economic recovery. Â Um… well, okay… if you say so.

Just writing down all the things that Herb did in his career makes me tired, so it’s easy to imagine that he needed a break, so he bought a place in Connecticut… a cottage by the sea… just somewhere comfortable where he could put his feet up and relax… take stock… reflect on life’s accomplishments. 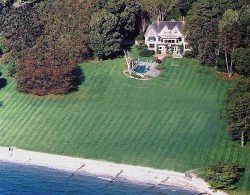 So, he boughtÂ Phil Donahue’s and Marlo Thomas’ $25 millionÂ Greens Farms Â mansion. The estate is three separate lots for a total of 7.7 acres.Â  The home is aÂ  7,379-sq.ft. 1911 wood and stucco Tudor with 17 rooms, including nine bedrooms. There is also a guest house. Â That’s a photo of the estate just above. Â Beautiful, don’t you think? Â Lovely, it really is just lovely.

Oh, yeah… I remember now… Â I was talking about how people that worked for the government didn’t used to make much money until perhaps they left their government jobs and went to work in the private sector.

You see, it seems to me that our government has become increasingly out of touch with the rest of our society, especially lately, that is to say that the current administration appears to have no connection whatsoever with the American middle class, for example.

Neil Barofsky, the SIGTARP, or Special Inspector for the Troubled Asset Relief Fund was fairly critical of the Home Affordable Modification Program over the last six months or so, right up until he resigned from his position a month or so ago.

At one point last fall he made the observation thatÂ the administration had established â€śmeaninglessâ€ť goals for its â€śflagship mortgage assistance program.” Â He pointed out that when PresidentÂ Obama introduced the program in the latter part of February of 2009, he claimed that the program would help 3-4 million homeowners, but as it turns out, the program has at best helpedâ€¦ and I use the term “helped” very looselyâ€¦ about 170,000 homeowners to-date. Â (This was back in September of 2010, today that number would be just north of 500,000.)

The administration’s response was… and I am not making this up, in fact I wrote about it at the time… that the plan’s goal wasn’t to actually help 3-4 millions of Americans, but rather merely to OFFER to help those millions.

â€śDefining success by how many offers are given can reasonably be perceived as essentially meaningless,â€ť Instead, the programâ€™s goal â€śmust relate to how many people are helped to avoid foreclosure.â€ť

Enter Assistant Treasury Secretary Herbert Allison, just prior to his departure to that lovely cottage on the water in Connecticut. Â Herb responded to Barofsky’s report in a letter, saying that theÂ statements about the planâ€™s goals â€śhave not always been precise.â€ťÂ  Then he argued that â€śoffers of helpâ€ť is a meaningful measurement because some borrowers who donâ€™t qualify for the government program would still be able to avoid foreclosure, and I could stop and try to interpret that sentence, but I’m just not going to as I’m not wearing my mouth guard.

Now, you see my point here, right? Â As Herb is making this inconceivably obtuse point, we as a nation are in the third full year of the foreclosure crisis, the byproduct of the worst economic meltdown in 70 years. Â Millions of Americans have already lost their homes to foreclosure, and all forecasts point to millions more certain to lose their homes in the next couple of years. Â Headline unemployment is hovering around 10%, and the administration is clearly scrambling to make the economic recovery take hold somewhere… anywhere.

And Herb Allison, God bless him, is actually arguing that the “OFFER” of help is really what matters, as opposed to the “PROVIDING” of help to millions of American homeowners, as the program promised. Â Like, to Herb, when it comes to saving homes from foreclosure, the main thing is that we try, not so much that we succeed.

Of course, Herb was spouting this insensitive drivel a month or so before he was off to retire to his 7,379-sq.ft. 1911 wood and stucco $25 millionÂ Greens Farms Â Tudor mansionÂ with the 17 rooms, including nine bedrooms, on 7.7 acres… with the guest house… that 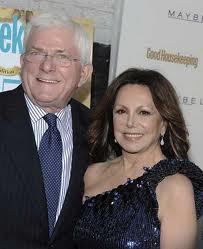 used to belong to Phil Donahue and Marlo Thomas.

Are you feeling me here?

See… because in the old days, our public servants, those that worked for the government, seemed to make less money than Phil Donahue or Marlo Thomas. They didn’t used to have Â 7,379-sq.ft. 1911 wood and stucco $25 millionÂ Greens Farms Â Tudor mansions with 17 rooms, and nine bedrooms on 7.7 acres… with the guest houses. Â And they used to seem more like the rest of us… more in touch with the lives of middle class Americans.

Maybe, if that were the case again, if our public servants were’t so far removed monetarily from the rest of us, maybe they would see the problems were facing with more clarity, and take them more seriously. Â For instance, maybe HAMP would have worked better than it did… maybe the foreclosure crisis would have ended by now, you know… if Herb wasn’t a zillionaire who lived in a Phil Donahue’s $25 million mansion on the waterfront.

And, maybe Herb is actually being sincere when he says that trying is as important as succeeding… that offering is as important as providing… because none of it will ever come close to affecting him personally. Â Herb, I’m fairly certain, isn’t going to lose his $25 million 7,379-sq.ft.Â Tudor 9 bedroom mansionÂ to foreclosure, in fact, my guess would be that he’s never going to know anyone in that predicament either. Â So, “we tried”… might be the most we can expect from this government.

Maybe Herb feels about HAMP’s underwhelming performance the same way the rest of us might feel if the capital gains or inheritance tax were to triple next year, and we were charged with preventing that from happening. Â Like, we might say… look, we tried… and isn’t “trying” what really matters here? Â The important thing was that we OFFERED to keep the capital gains tax the same… we “TRIED” to keep it the same… and that’s how you really have to measure the success ofÂ our efforts, as opposed to succeeding and and actually keeping the tax rates the same.

Like, we might one day say to them: Oh well, we tried and we offered… and that’s what was important about our efforts… your Capital Gains and inheritance Â tax rates have tripled, however… so… sorry about that… chin up.

Hat Tip to Nomi Prins for pointing out Herb’s $25 million purchase of Phil’s and Marlo’s waterfront pad to me.Â  I’ll be reviewing her latest book, “It Takes a Pillage,” in the next week or two.Â  You can visit her site here, Nomi Prins… and really… I cannot recommend doing so highly enough.