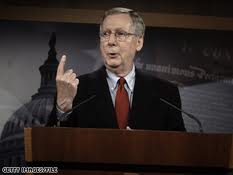 Almost as soon as the polls had closed this past November and the midterm elections were behind us, Senate Minority Leader Mitch McConnell (R-KY) stated that making sure that Obama is a one-term president was the GOPâ€™s most important priority.

Well, first let me state the obviousâ€¦ McConnell is a jackass.Â  If the United States Senate has a Human Resources department, someone needs to get this guy a copy of his job description because heâ€™s completely lost touch with what he and all of our other elected officials are sent to Washington D.C. to do.

I know that a politicianâ€™s job is to win elections, but no one elected Mitch or anyone else to work in opposition to the best interests of the American people.

And donâ€™t start accusing me of being a member of the â€śObama Fan Club,â€ť because Iâ€™m not.Â  Obama has proven himself to be a terrible crisis president.Â  He has single-handedly managed to take what was unquestionably an inherited economic disaster on the scale of The Great Depression, and make it, not only his problem, but also his fault.

He went from being a man of the people, to being the best friend Wall Street could ever have hoped for, and for that the Republicans accuse him of being a socialist, while the left accuses him of being too much the centrist who has turned his back on their progressive agenda.Â  He makes seeking bipartisan consensus look like a pathetic need to be liked by everyone at school.Â  Itâ€™s flat-out dizzying to watch, and makes John Stewartâ€™s job on The Daily Show far to easy.

Coincidentally (and proving that great minds do think alike), Â The Atlantic published an article this month about McConnell, titled, “Strict Obstructionist,” and it’s certainly worth reading. Here’s a quote…

“McConnell calledÂ TARPâ€™s passage â€śone of the finest moments in the history of the Senate.â€ť Obama took over expecting this spirit to endure. But from the outset, McConnell blocked or frustrated just about everything the administration tried to do, including the governmentâ€™s distribution ofÂ TARPÂ funds, in January 2009, just three months after McConnell voted to authorize them.”

Although, at many times in our history, when our nation has faced real problems, the Republicans and Democrats have put their differences aside, placing the interests of the nation ahead of anything related to partisan politics in order to do what’s right for the people of this country. Â But this idea is entirely foreign to McConnell.

McConnell and the GOP have made it clear that they will spend the next two years blocking anything that has even the slightest potential to make Obama look good in 2012, regardless of the impact to the American people.Â  It would seem that the brain trust over at the GOP actually believes that even if Americans are starving in the streets come 2012, itâ€™s a good thing for them.

Obviously, what we have here are some low three-digit SAT scores at work.Â  Letâ€™s play it out and see where the GOPâ€™s strategy is headed. 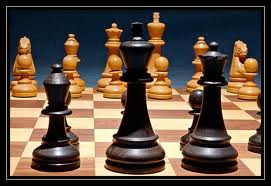 As I write this, the Obama Administration has all but finalized a so-called compromise that will extend the Bush tax cuts for Warren Buffet and Bill Gates in exchange for extending unemployment benefits for another 13 months.Â  Itâ€™s either that, or something like six or seven million people in this country will soon have no income as they struggle to survive in our depressed economy that hasnâ€™t even begun to replace the tens of millions of jobs lost over the last few years.Â  I donâ€™t want to play economist here, but that doesnâ€™t sound like it will lead to an increase in consumer spending does it?Â  Or am I missing something here?

At the same time, extending the Bush tax cuts for those with annual incomes over $250,000â€¦ which is about one percent of the population, by the wayâ€¦ besides increasing the deficit, will do what exactly?

The Republicans want me to believe that we need to keep the tax cuts in place because of something about small business owners creating jobs and rich people trickling down their good fortune on the rest of us, but that hasnâ€™t happened for the last ten years, so what the heck are they talking about?Â  Itâ€™s as if they think that by repeating something they heard Art Laffer say during the Reagan years over and over again, it makes it true. Â Like when they go into that incessant drumbeat about reducing the deficit being the countryâ€™s number one priority, even though youâ€™d be hard pressed to find 100 people on the streets of any major U.S. city that would pick that for our top priority off a list of alternatives.

So, here we goâ€¦ Mitch McConnell, who has been described as having â€śthe natural charisma of an oyster,â€ťÂ and his GOP pals proceed to block anything that might make our lives better for the next 18 months, after which time weâ€™re not going to do anything but return to the moronic mudslinging on Fox News, which will be in its fear-mongering glory by that point as they point out all the ways Americans are either circling the drain or have already gone down it.Â  Because by that time we will be two years worse off than we are now, unemployment benefits, assuming they are extended for 13 months this time, will have provided recipients with enough money for bread and water, we will have lost another five million homes to foreclosure and even the reported unemployment rate will be solidly in double digits.

Now, close your eyes and picture what you know itâ€™s like today all over America and imagine that everything thatâ€™s keeping you up at night now, at least on occasion, is two years WORSE than it is now.Â  Your house that had already lost much of its value, has dropped another fifty grand, not that it matters because there arenâ€™t anymore people left in this country who have 860 FICO scores, 30% down payments saved up, who donâ€™t already have the homes they want and arenâ€™t worried about losing their jobs.

Soâ€¦ whose running for President in 2012â€¦ or, the better question might beâ€¦ who isnâ€™t running, because economic times as Iâ€™ve just described lead to things like the Tea Partyâ€¦ Ron Paulâ€¦ Ralph Naderâ€¦ can you say â€śH. Ross Perot in 1992?â€ť

The Republican primaries stage a debate with 12 hopefuls on stageâ€¦ everyone from Sarah Palin to Mitt Romneyâ€¦ to Bobby Jindalâ€¦ to God only knows.Â  The Christian Right doesnâ€™t like one side, and the Tea Party canâ€™t stand the other.

For a single candidate to emerge victorious, he or she would need to be a conservative-populist-Christian-Wall-Streeter-Deficithawk-Pro-Militarty individual who claims to be committed to stopping the wars still raging in Afghanistan and Iraq, while preventing Iran from building nukes, that is friendly to the global concerns of China and the G20, and has a vision for lowering taxes without increasing the deficit.Â  If you thought McCain had problems last time getting the support of his party, this next time out is going to be indescribable.

Of course, Obama is running for reelection in 2012, and heâ€™s out on the campaign trail touting accomplishments like health care and financial reform, trade deals with South Korea and the like, and sniping at Republicans for standing in the way of change.

Want to know what happens?

The election is a three- or maybe even a four-way race, aâ€™la 1992.Â  The Tea Party candidate actually manages to win 10 percent of the Republican vote, and Ron Paul or at least a reasonable facsimile wins another 12 percent.Â  The main stream Republican, who has had to try to please so many masters that heâ€™s got enough wholes in him to do a pretty good Swiss cheese imitation, has become the partyâ€™s choice because he or she is the banking industryâ€™s favorite.Â  Thereâ€™s an Independent candidate as well, siphoning votes from the middle that is so totally disenchanted with Obama thatâ€™s theyâ€™d rather vote for Dubya again. 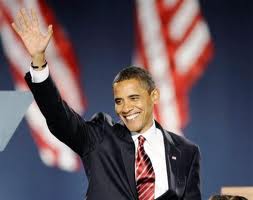 And as the dust settles, Obama wins his second term with 34 percent of the vote, as the Republicans keep control of the House, and the Senate officially becomes the political equivalent of the 1960s childrenâ€™s television program, Romper Room.

Oh sure, Obamaâ€™s approval rating is 28 percent, and no president has ever been reelected with unemployment over 10 percent, but it doesnâ€™t matter because the alternative candidates have either destroyed each other during the campaign, or were just plain too nutty to begin with to win a national election.Â  And unless Obama is caught having sex with Bill Clinton under the desk in the Oval Office, and then lies about it on national television, heâ€™ll get 35 percent of the vote from the youth, inner city, college, and dyed-in-the-wool Democrat crowds, and thatâ€™s all heâ€™ll need in the sort of open field race that will result from our economy being that much worse 18 months from now.

Mitch McConnell, who doesnâ€™t come up for reelection until 2016, will be sporting one of his stupid deer-in-headlights looks as he tells the cameras that the Republicans are prepared to work towards bipartisan solutions to the nations problems and that what we need are further tax cuts.Â  But Obama, now safely in his second terms canâ€™t stop picturing McConnell in a clown suit as he watches him bemoan the electionâ€™s outcome.

Yes, itâ€™s 2012â€¦ roughly five years into our Great Recession, if weâ€™re still calling it that positive a euphemism.Â  Obama is back for another four years, absent any real mandate, and with a completely dysfunctional legislature, as he stares at the worst U.S. and global economy ever.Â  At the end of his second term we will be wrapping up our first â€ślost decade,â€ť and hoping for the sort of recovery we had back in 1936.

Obamaâ€™s first priorities will be to stabilize our nationâ€™s financial institutions, who by then with every third or fourth house in or near foreclosure, will need to be bailed out once againâ€¦ and the passage of an economic stimulus bill that will put Americans back to work.Â  Oh yeah, and something about reducing our dependence on foreign oil with green jobs, education, and infrastructureâ€¦ and bridgesâ€¦ Iâ€™m thinking weâ€™ll need to fix lots more bridges.

Itâ€™s a fate accompli, Iâ€™m afraid, because Mitchâ€™s plan is already set in stone and underway.Â  And, since I will likely be drinking heavily most days when all this happens, Iâ€™d better congratulate him nowâ€¦

Nicely done, Mitch!Â  Crackerjack work, as a matter of fact. 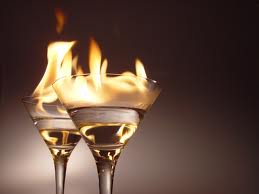