Derivatives, deregulation, Wall Street, shadow banking, interconnection‚Ä¶ all words that might be used to describe the financial crisis that has thrown this country into an abyss so deep, that I don‚Äôt think anyone can even fathom just how much pain it will ultimately cause as the years awaiting a recovery that never seems to come, flow by.

They‚Äôre also good words to have on hand if you‚Äôre part of a Financial Crisis Inquiry Commission responsible for authoring a report on what caused the nation‚Äôs financial crisis, how the largest financial institutions managed to become permanently insolvent in unison, how these same geniuses managed to destroy the global credit markets and our country‚Äôs regulatory credibility over a single summer, and then how they managed, after being shamelessly bailed out by American taxpayers, to maintain their smug and entitled attitudes, all the while doing whatever they could think of to abuse and torture American consumers.

But none will be used in the upcoming report to be issued by the Republican members of the Commission, who have decided to jump out in front and publish their own report, ostensibly because the 500 page report to be released next month by the Democrats just wasn‚Äôt robust enough for their liking.¬Ý And besides, it talks about all that excessive risk taking, unscrupulous practices by lenders, and lack of derivatives regulation that the Republicans see as having nothing to do with the economic meltdown. 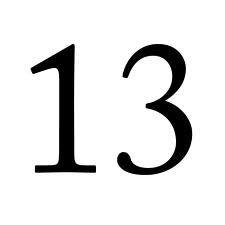 The Republican‚Äôs version of the report is said to be a whopping 13 pages long, and is expected to place the blame for the crisis squarely on the shoulders of poor people who wanted to buy houses, and how some combination of Fannie, Freddie and the Community Reinvestment Act, facilitated their wanton irresponsibility.¬Ý If those damn poor people could have just paid their mortgages as they agreed to, everything would have been fine.

The Republicans involved in this foray into censorship and revisionist history were former California congressional representative, Bill Thomas, Keith Hennessey, who was an economic adviser to President George W. Bush; Douglas Holtz-Eakin, who you might remember as the three names running the CBO a while back, and Peter J. Wallison, one time White House counsel to President Ronald Reagan.

‚ÄúDuring a private commission meeting last week, all four Republicans voted in favor of banning the phrases “Wall Street” and “shadow banking” and the words “interconnection” and “deregulation” from the panel’s final report, according to a person familiar with the matter and confirmed by Brooksley E. Born, one of the six commissioners who voted against the proposal.‚Äù

“I think a number of us had really pulled for” bipartisan consensus, said Born, a Democratic commissioner who famously tried to regulate certain derivatives as head of the Commodity Futures Trading Commission. “But this action by the Republicans indicates they have decided to go their own way.” 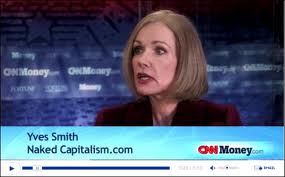 But, without question, it was Yves Smith of Naked Capitalism who grabbed for and got the brass ring, with her blog post on the actions of the Republicans on the Commission‚Äôs progress, or lack thereof, titled: Republican Members of FCIC to Promote Crisis Urban Legends, Shift Blame From Banks.‚Äù

Responding to the Republicans contention that the crisis was primarily caused by Fannie and Freddie, Smith put it this way:

‚ÄúLet‚Äôs look at a few inconvenient facts.¬Ý We had housing bubbles in the UK, Australia, Ireland, Spain, Iceland, Latvia, Canada, and a lot of Eastern Europe.¬Ý Can we blame the CRA and Fannie and Freddie for that?¬Ý How about the M&A boom, which resulted in a ton of leveraged loans being issued at super low spreads?¬Ý If the Fed and other central banks had not driven rates to the floor, we‚Äôd see a good bit more distress and dislocation in this sector of the market.¬Ý Oh, and how about the fact that banks in Continental Europe, which had no housing bubble in their home markets, and no evil Fannie or Freddie analogues, also nearly keeled over in the crisis?

This whole line of thinking is garbage, the financial policy equivalent of arguing that the sun revolves around the earth.‚Äù

I told you‚Ä¶ is she hot or what?¬Ý And when she chimes in somewhere in the middle of a piece, she goes: ‚ÄúYves here.‚Äù¬Ý Totally hot.

My first reaction to reading Nasiripour‚Äôs article was that we needed to send a tenured elementary school teacher to run these types of Commissions in the future because there‚Äôs no way an experienced teacher of third grade would put up with four out of ten of her students picking up their toys and going home in the middle of an assignment.

The Republicans demanding that certain words be omitted from the final report was a goofy idea, in my mind‚Ä¶ I mean, you can‚Äôt use the words ‚ÄúWall Street?‚Äù in a report about‚Ä¶ well‚Ä¶ Wall Street? 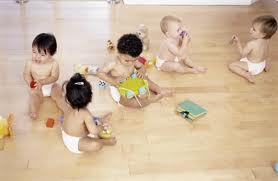 For a moment I considered the idea of these guys being the biggest babies ever seen in such a setting, but then I remembered that I was talking about the U.S. House of Representatives, so that wasn‚Äôt likely to be the case.

But seriously‚Ä¶ how can you talk about the financial crisis we‚Äôre still enduring without using the word ‚Äúderegulation?‚Äù¬Ý Or the word: ‚Äúderivatives?‚Äù

I suppose you could take a page out of Ben Bernanke‚Äôs handbook on how to avoid using the word: ‚Äúdeflation,‚Äù and talk about ‚Äúsomewhat reduced regulatory expectations,‚Äù or some such drivel.¬Ý But ‚Äúderivatives?‚Äù¬Ý There‚Äôs no way to touch the subject matter without specifically discussing the impact of derivatives.

I wonder if after the Republicans made their demands to omit certain words, if some of the Democrats started using the words even more frequently, until the Republicans started putting their fingers in their own ears, saying ‚ÄúLa, La, Las‚Ä¶ we can‚Äôt hear you‚Ä¶‚Äù¬Ý And then the babies ran out of the room crying?¬Ý I don‚Äôt know, just thinking out loud.

‚ÄúThis pathetic development shows how deeply this country is in thrall to lobbyists. But these so-called commissioners, who are really no more than financial services minions out to misbrand themselves as independent, look to have overplayed thier hand. ¬ÝThis stunt shows more than a tad of desperation on the part of banks and their operatives in their excessive efforts block any remotely accurate, and therefore critical, report on the industry.‚Äù

I couldn‚Äôt agree more, and there‚Äôs no reason for me to say anything further about that, as Yves has phrased it flawlessly.¬Ý And check out what she said towards the end of her blog post:

‚ÄúIt may also suggest that the banking industry is feeling more cornered than its continued high-handed posture might suggest. ¬ÝI continue to receive reports from industry insiders confirming that the biggest banks in the US are insolvent. ¬ÝThe only sensible resolution of the mortgage mess involves deep principal mods, which will force the top four banks to write down their second mortgage books, blowing big holes in their balance sheets, and raising numerous, embarrassing questions (how could they and the Treasury defend paying back the TARP, much the less the level of 2009 and 2010 bonuses?)‚Äù

And finally Yves puts a bow on the whole thing‚Ä¶

‚ÄúIn other words, the banks may be worried about the possibility of a backlash that might actually be effective. ¬ÝBut they are already too late to stop the inevitable.

They refuse to halt the juggernaut, a doomsday machine that continues to grind up families and communities and saddle innocent bystanders with the costs of higher taxes, unemployment, sagging infrastructure, and poor prospects for their children. This next two years may be the last window to leash and collar a parasitic financial services industry.

If the authorities fail yet again, the cost will be both the rule of law and our unwritten social compact. If you tear asunder structures that fundamental, expect to reap a whirlwind.‚Äù