Home  »  President Obama… Thank You. Elizabeth Warren… Will You Marry Me?

President Obama… Thank You. Elizabeth Warren… Will You Marry Me? 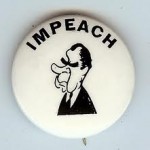 I’ve been following politics since I was about nine years old.  It’s true… I got sent home with a note from my teacher for refusing to take off my “Impeach Nixon” button.  I got into politics at nine because of something that happened when I was only seven… Humphrey beat Nixon in 1968… and that was it for me… I had had enough!

I campaigned tirelessly for McGovern in 1972.   The night of the election, I stood outside of the polling location and handed out flyers for the man who I hoped would take out the man who had run saying he would end a war in Southeast Asia that he’d only escalated.  I hated that war.  It was on television every single night when I was growing up… when I wanted to watch Bonanza.

McGovern lost in a landslide and I went into a funk.  I swore off politics forever, and went back to learning Bob Dylan’s songs on my guitar.  Come senators and congressman please heed our call… Don’t stand in the doorways, don’t block up the hall… For he who gets hurt will be he who has stalled… There’s a battle outside and it’s raging… It’ll soon shake you windows and rattle your walls… For the times they are a changing.

The only problem was that at 12 years old my voice was changing and Dylan just doesn’t come across well when it’s crackling like Greg Brady meets Julie Andrews.

For the next several years our family’s television set was either showing the war in Viet Nam or the Watergate Hearings, and before I knew it, the Pres was waving from that helicopter and Gerald Ford was falling down every time I watched T.V.  But Ford pardoned Nixon and we knew the fix was in.  I swore off politics for the second time in my life, but this time I meant it. 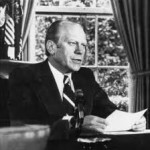 Over the next thirty years I followed politics fairly closely… at least when it was interesting to watch… and it usually was, at least as far as the President of the United States was concerned.  But, as far as Presidential appointees… well, I can’t remember ever feeling so personally involved as I have in the appointment of Elizabeth Warren to lead the Consumer Financial Protection Agency, the CFPA.

When I first heard President Obama talk about the agency I laughed in disgust.  Oh right… like this is our response after Wall Street destroys the world as we know it?  Regulate credit default swaps?  No.  But we will give you a new federal agency to fund.  Gosh, thanks. 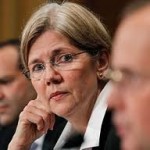 But that was before I knew Elizabeth Warren as the TARP chief… the Harvard professor… the advocate for the middle class… the woman who was the only person in Washington D.C. who could stare down Treasury Secretary Tim “Transparency” Geithner and make him flat out squirm.  Geithner, obviously, hates her, and that makes me love her all the more.  Liz Warren so totally rocks!  I don’t care who knows it… I’m smitten.  The last time I felt like this I had a crush on my sixth grade teacher.  I may just send her a Valentines Day card.

So… everything was going swimmingly when out of nowhere President Obama wasn’t sure he was going to appoint Warren to head up the new agency.  Instead the name “Michael Barr” was floating about the press, and that angered me beyond reason.  Assistant Treasury Michael Barr might be a decent person, but his words make him a shameless cheerleader, a defender of that which should not be defended, and an all around sycophant’s sycophant.  Perhaps if we needed someone to give bankers back rubs, he’d be my choice, but as far as filling in where Liz Warren was supposed to go, there was no chance… he’d never be able to stand in her pumps.

I wrote several articles supporting Warren and urged my readers to make calls to their elected representatives in support of Warren.  And I made my position clear: Either Obama would appoint her to lead the new agency, or I was done with this administration.  And I meant it.  President Obama has been a bit of a dissappointment to me, and I’m guessing several others, and appointing Barr to the post would be the straw the broke my monkey’s uncle, or how ever that saying goes. 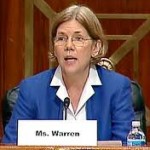 But, thank the good Lord… it happned!  President Obama today appointed Elizabeth Warren to lead the CFPA… on a temporary basis, according to ABC News… but still… she’s there.  And he can keep her there as a temporary chief as long as he wants, and I’m sure he’ll make it permanent as soon as his testicles drop.

So, today is a good day in America, the first good day in a long, long time.  There should be parades in the streets, ’cause there’s a new sherriff in town and her name is Liz Warren.

Hey… Lord Blankcheck, Jamie Diamonds, John’s Stumped, Vikram Pander… and that new guy at BofA that replaced the clown-like Kenny Lewis… you guys better shape up and get some new writers ’cause Liz is quite verbally adept and she can make people like you look stupid with the deft touch of a Kindergarten teacher.  (It’s weird… I just wrote those banker names and I could swear it dropped like 20 degrees in here… I’m not kidding, I can see my breath all of a sudden.)

Elizabeth Warren wrote a piece in today’s Huffington Post.  She titled it: America Without a Middle Class, and her message came through loud and clear:

“America without a strong middle class? Unthinkable, but the once-solid foundation is shaking.”

She also described the new agency:

“The CFPA would be answerable to consumers — not to banks and not to Wall Street. The agency would have the power to end tricks-and-traps pricing and to start leveling the playing field so that consumers have the tools they need to compare prices and manage their money.

The response of the big banks has been to swing into action against the Agency, fighting with all their lobbying might to keep business-as-usual. They are pulling out all the stops to kill the agency before it is born. And if those practices crush millions more families, who cares — so long as the profits stay high and the bonuses keep coming.”

Yeah, well they’re not crushing my American family, and I’m going to make sure they don’t do any crushing around me either.  I’ve had more than enough of these banking bullies… this is my country and I’m damn glad Liz is on the job.

“America today has plenty of rich and super-rich. But it has far more families who did all the right things, but who still have no real security. Going to college and finding a good job no longer guarantee economic safety. Paying for a child’s education and setting aside enough for a decent retirement have become distant dreams.

Tens of millions of once-secure middle class families now live paycheck to paycheck, watching as their debts pile up and worrying about whether a pink slip or a bad diagnosis will send them hurtling over an economic cliff.”

I’m not kidding when I say this… there’s not one person in Washington who can carry her wrap, as far as I’m concerned.

“They recognize that business models have shifted and that big banks are pulling out all the stops to squeeze families and boost revenues. They understand that their economic security is under assault and that leaving consumer debt effectively unregulated does not work.”

“While the middle class has been caught in an economic vise, the financial industry that was supposed to serve them has prospered at their expense. Consumer banking — selling debt to middle class families — has been a gold mine.”

Then, last Tuesday came and Sen. Chris Dodd (D-Conn.), chairman of the all-powerful Senate Banking Committee, came out with a statement saying that “such an interim appointment could create a backlash and lead the next Congress to defund the bureau”.  I wasn’t surprised, however, because I saw Senator Dudd coming in August and made him September’s REAR in my Bringing Up the Rear column that appears each month on the very last page of The Niche Report magazine.  And he is, as I’ve said about others of his ilk, a REAR among REARs. 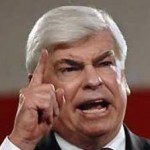 You see, Warren went after the monied establishment recently during a hearing, and HuffPo had the quote:

“We do not seem to be a priority for the Treasury Department,” Warren said at a Senate Finance Committee hearing, chaired by Sen. Chris Dodd (D-Conn.), of her oversight panel. “This problem starts with Treasury.”

Hear that, Timmy?  That’s not rain… it’s the showers being turned on… your game is almost over.

But, I still wasn’t certain how it was going to go, and I can’t remember another time in my life when I felt so involved in the appointment of someone who would chair a federal agency.  I knew that we just had to have Warren… there would be no compromise.  We’d endurred too much these past two or three years and I just didn’t want to go on without Liz.  And yet… as recently as a week ago it was still up in the air as to whether Obama would pull the trigger, and opposition to her appointment was growing…

“Later that year her opposition widened to include much of the House GOP. Republicans on the House Financial Services Committee introduced an amendment to Wall Street reform intended to prevent Warren from ever heading the agency.”

Thank God, that amendment was defeated.  And, by the way… look who’s waiting with open arms for me to throw in the towel.  I’m so glad I didn’t leave the frying pan… just yet.