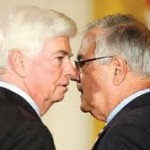 President Obama is expected to sign the new financial reform bill, known as the Dodd-Frank Act, by the end of this week.  Although I have not read the actual text of the bill, I did read the Press Release sent out by the Committee on Financial Services… and there are some very interesting developments.  If you have any interest in what Congress has and hasn’t done, its worth reading, and I certainly plan to take it apart and write more about it in the days to come.

Perhaps most notably, but least mentioned, the bill requires the credit rating agencies, Moody’s, Fitch, and Standard & Poors, to not only be more transparent, but also potentially liable for issuing “bad ratings” on bonds.  The role of the bond market and the credit rating agencies in the financial meltdown is not widely understood, I’m aware, but it’s nice to know that Congress is aware, and this is evidence that that’s the case.  Here’s what the Committee’s press release has to say on the matter as far as the ratings agencies are concerned:

New Office, New Focus at SEC: Creates an Office of Credit Ratings at the SEC with expertise and its own compliance staff and the authority to fine agencies.  The SEC is required to examine Nationally Recognized Statistical Ratings Organizations at least once a year and make key findings public.

Disclosure: Requires Nationally Recognized Statistical Ratings Organizations to disclose their methodologies, their use of third parties for due diligence efforts, and their ratings track record.

Independent Information: Requires agencies to consider information in their ratings that comes to their attention from a source other than the organizations being rated if they find it credible.

Conflicts of Interest: Prohibits compliance officers from working on ratings, methodologies, or sales; installs a new requirement for NRSROs to conduct a one-year look-back review when an NRSRO employee goes to work for an obligor or underwriter of a security or money market instrument subject to a rating by that NRSRO; and mandates that a report to the SEC when certain employees of the NRSRO go to work for an entity that the NRSRO has rated in the previous twelve months.

Liability: Investors can bring private rights of action against ratings agencies for a knowing or reckless failure to conduct a reasonable investigation of the facts or to obtain analysis from an independent source. NRSROs will now be subject to “expert liability” with the nullification of Rule 436(g) which provides an exemption for credit ratings provided by NRSROs from being considered a part of the registration statement.

Right to Deregister: Gives the SEC the authority to deregister an agency for providing bad ratings over time.

Education: Requires ratings analysts to pass qualifying exams and have continuing education.  Eliminates Many Statutory and Regulatory Requirements to Use NRSRO Ratings: Reduces over-reliance on ratings and encourages investors to conduct their own analysis.

Independent Boards: Requires at least half the members of NRSRO boards to be independent, with no financial stake in credit ratings.

Ends Shopping for Ratings: The SEC shall create a new mechanism to prevent issuers of asset backed-securities from picking the agency they think will give the highest rating, after conducting a study and after submission of the report to Congress.

It should come as no surprise that the ratings agencies do not like this aspect of the bill one bit.  Fitch has gone so far as to notify its clients that they should not use its ratings “in prospectuses and registration statements at this time.”  Here’s what Fitch sent out to its clients, as reported by Tara Perkins on Globe Investor:

“Immediately after the Dodd-Frank Bill is signed into law an issuer will need to obtain Fitch’s written consent to include a Fitch credit rating in a Securities Act registration statement and any related prospectuses.”

“Fitch will be potentially exposed to ‘expert’ liability under section 11 of the Securities Act, liability to which Fitch is not currently exposed. Fitch is not willing to take on such liability without a complete understanding of the ramifications of that liability to Fitch’s business and the means by which Fitch may be able to effectively mitigate the risks associated therewith. While Fitch will continue to publish credit ratings and research, given the potential consequences, Fitch cannot consent to including Fitch credit ratings in prospectuses and registration statements at this time.”

Fitch is not a fan of the new rules and, ironically, argues that it should not be considered an “expert” under the Securities Act “since ratings are inherently forward-looking and embody assumptions and predictions about future events that by their nature cannot be verified as facts.”

There’s more. The Dodd-Frank Act says that the SEC should remove the exemption for credit rating agencies from the Fair Disclosure Rule within 90 days of the enactment of the new law. That threatens to dramatically cut back the amount of information that rating agencies receive.

“The exemption for credit rating agencies from Regulation FD permits issuers to provide the credit rating agencies with material non-public information without requiring public disclosure of such information,” Fitch notes. “To the greatest extent possible, Fitch will work with the issuer community to put in place appropriate mechanisms so that Fitch can continue to receive confidential information as part of the rating process.”

Well, one thing I can say about this: In terms of news regulations, it’s not nothing.

My personal view as to the role of the ratings agencies has always leaned towards acknowledging that to great degree, they were manipulated by the bankers, Goldman Sachs and the rest.  I understand that they were paid for their involvement, and that they didn’t do nearly enough to prevent the problems from occurring, but I think one also has to recognize that, compared with the bankers, the amounts the ratings agencies received represented nickels and dimes.

In addition, Wall Street’s bankers plainly took advantage of the ratings models, submitting securities in such a way as to exploit the holes they knew existed.  So, all in all, while I think the ratings agencies were complicit in certain ways, I don’t think they should share equally in the blame, by any means.

Nonetheless, I’m encouraged by the inclusion of this new area of regulation, it’s obviously had its intended impact already, and regardless of who did what in the past, it seems that this is certainly a big step in the right direction at least as far as preventing future fraud as a result of improperly rated debt securities goes.

So, alrighty then… score one for our side.

And thanks to the blog, Naked Capitalism for bringing this to my attention.  Naked Capitalism is a super smart and all-around terrific blog, by the way.  It has many contributors, but is the home of Yves Smith, who is like one of the smartest people on the planet.  She currently heads up Aurora Advisors, a New York-based management consulting firm that specializes in corporate finance.  Her past gigs include Goldman Sachs and McKinsey & Co. and you don’t get a more impressive resume than that, and she’s a graduate of Harvard College and Harvard Business School… big surprise there.