Home  »  Have a “Plunder Party” and Help Change Our World

Have a “Plunder Party” and Help Change Our World

I could answer by saying that you have to “speak out,” but what the heck does that really mean? Â I could say, “Write to your congressional representative,” but for most people, that feels like it will be about as effective as trying to remove sand from the beach with a teaspoon.

I want to answer the question today of what you can do to help change what’s being allowed to go on in this country as far as your fellow citizens are concerned, but before I do I want to make sure everyone understands two things:

Okay, so what can you do today… right now, as a matter of fact… to start changing the course our nation is currently following? Â And, let me assure you of something: If we don’t change that course, if we allow the foreclosure crisis to continue unabated, we will most assuredly increasingly experience the pain of a nation whose economy in an ongoing decline… for years… and by “years” I mean decades.

So, what am I suggesting you do? Â Have a “Plunder Party!”

PLUNDER – The Crime of Our Time, is a movie produced and directed by Danny Schechter, that shows what Wall Street did to destroy our economy. Â It’s the first movie that clearly shows that what’s happened over the last several years was not a natural disaster, nor was it a market correction. Â The destruction of our credit and financial markets, along with the housing market was not caused by irresponsible borrowers, it was the result of financial terrorism… a series of criminal acts perpetrated by Wall Street’s bankers who made billions as a result.

I don’t care what your views are today… they will have changed after you watch PLUNDER – The Crime of Our Time. Â It’s entertaining, never boring, and it’s never “over anyone’s head”. Â Anyone who watches this movie will at least be angry, but if enough watch it, they’ll be ready to take action… the next step, whatever that step turns out to be. Â Think of it as the foundation upon which we can begin to call on the citizens of this country to speak out and demand real change.

I think everyone has a friend or family member who thinks the crisis was caused by irresponsible sub-prime borrowers, who are now lowing their homes and should be. Â They’re wrong, and you know they’re wrong, but it’s a tough argument to win. Â More than a few of my readers have contacted me over the last year saying that they wish I could come over and set their special someone straight, and frankly I wish I could too, because no one… and I do mean no one… has any chance of winning that argument if I’m involved, and not because I’m such a brilliant debater, but because they have their facts wrong… they are misinformed. Â I am not, and neither is Danny Schechter. 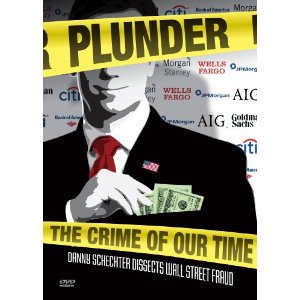 “A hard-hitting investigative film by Danny Schechter. The â€śNews Dissectorâ€ť explores how the financial crisis was built on a foundation of criminal activity uncovering the connection between the collapse of the housing market and the economic catastrophe that followed. To tell this story Schechter speaks with bankers involved in these activities, respected economists, insider experts, top journalists including Paul Krugman, and even a convicted white-collar criminal, Sam Antar, who blows the whistle on intentionally dishonest practices.”

It’s easy to have a PLUNDER PARTY… and even if you don’t want to have an actual party… start by ordering the DVD by clicking the link below. Â When the DVD arrives, watch it. Â It will make you mad, it may make you cry. Â The make the decision… who would you like to have over to watch it with you? Â Make a list, it doesn’t matter whether you invite two people… 20 people… or 200 people. Â Make popcorn… serve lemon aide… set up chairs so your guests are comfortable.

Tell everyone why you think this is such an important film to watch. Â Write to me and I’ll help you write something, help you plan it out. Â If you want, you can even set up a speaker phone and call me after the movie has ended and I’ll answer any questions you guests might have… I’m sure I can get Danny Schechter to be on many of those calls too.

People, let’s do this… really do this. Â It’s not the only thing we’ll do… but it’s a starting place and it’s something we all can do now. Â For what it’s worth, I’m having my own PLUNDER PARTY in early August, and I’ll be sure to film it and post it on my blog so you’ll be able to see how it went.

I’m thinking of setting out a metal tub filled with apples and a sign that says “Apples 5Â˘,” just like during the Great Depression, and serving chili, but calling it “Rabbit Stew,” or something like that. Â Maybe I’ll even dress in clothes that look like I just walked out of The Grapes of Wrath, if you remember that book or the movie with Henry Fonda.

I don’t know… I think it’s going to be a hoot! Â A lot more fun than one of those Pampered Chef parties I got dragged to a few years ago. Â (Sorry, I’m just saying…)

So… get started now… click the link in the red box and order the DVD from Amazon.com right now… while you’re thinking about it. Â And yes… in the spirit of full disclosure, I’m an Amazon affiliate, so I’ll make 6.5% of the $16.99 sales price, which is about a buck. Â Just so you know…
“Plunder –

What’s next? Â Here’s what I think should be next. Â It’s called “A Hundred Thousand Homeowners – Voices of Hope & Change“. Â Click the link and find out how you can join 100,000 homeowners in sending a message to Washington that will be heard.