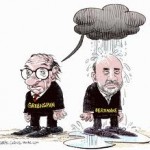 Ben Bernanke, the current Chairman of the Fed, says of the economy, that there is “unusual uncertainty”. Â He’s not sure about anything, this guy. 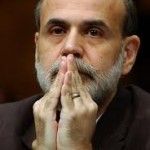 June 20th, 2007 â€“ Bernanke: The fallout from the housing markets will not affect the economy overall.”

He was sure that it would not be appropriate for the Federal Reserve to bail out the banks:

October 15th, 2007 â€“ Bernanke: “It is not the responsibility of the Federal Reserve – nor would it be appropriate – to protect lenders and investors from the consequences of their financial decisions.”

He said things about unemployment that have never been even close to correct, underestimating it for at least 11 months straight by six figures, or very close… I stopped counting after that.

June 9th, 2008 â€“ Bernanke: “Despite a recent spike in the nation’s unemployment rate, the danger that the economy has fallen into a “substantial downturn” appears to have waned.”

And about Fannie and Freddie, he was sure the two mortgage giants were safe and sound, like a bug in a rug… as my grandmother used to say.

July 16th, 2008 â€“ Bernanke: Freddie and Fannie will make it through the storm and are in no danger of failing; they are more than adequately capitalized”

Now, however, with a snowcapped mountain of evidence of our deflationary collapse staring him in the face, all he sees is “uncertainty,” and he calls that “unusual?” Â See… that’s not funny, that’s just sad. 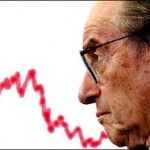 Alan Greenspan is the retired Fed Chief, and he sees things much more clearly now that he’s no longer directly responsible for what the markets do when he sneezes.

â€śWe’re still nowhere near the bottom of the home price thing,â€ť Greenspan told CNBC in an interview today.

Asked about Fannie and Freddie, the two failed mortgage messes that like to threaten homeowners over strategically defaulting, Greenspan said the government had no choice but to take them over but he added that the government will probably have to nationalize the two companies, calling them a “major accident waiting to happen.”

Don’t you love that… Ooopsie! Â Lookie who had an accident.

Asked about whether we’ll slip back into a recession, which is a stupid question since we’ve never slipped out of the recession that started a couple of years back, he said:

“I think we’re probably likely to go there. We’re right on the brink. And I would be more surprised if we didn’t than if we did, given the financial Â state.â€ť

He also pointed out that recent signs of slowing in the rest of the global economy is also a source of concern. Â Genius, the man is a genius. Â It’s truly awe inspiring, the way he’s got his arms around the whole global thing.

These guys are really clown-like. Â In my mind, I keep seeing them all getting out of one tiny car. 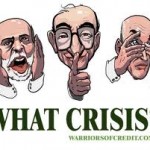 Yes… it’s a long slide down… but make no mistake… that’s where we’re headed. Â Stay tuned, because I may not be able to save the country, but I can certainly try my best to help you.