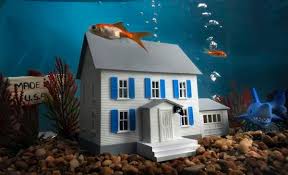 A Bank of America analyst has recently published a report predicting that the U.S. housing market will experience â€śthree straight years of â€śmodestâ€ť decline starting in 2017.â€ť Â  In that report, Bank of America analyst, Chris Flanagan, stated that he believes that â€śslack income growth will be the culprit that will put pressure on housing prices in the coming years.

According to Bloomberg and reported by Mortgage Professional Magazine, Flanagan saidâ€¦

â€śWe do not see income growing fast enough to keep up with the past few years of rapid increases in home prices.â€ť

As Iâ€™ve pointed out too many times, the increases in home prices of late have not been driven by increasing demand, but rather by scarcity, so itâ€™s not hard to believe that what has come up will also come down.Â

The S&P/Case-Schiller U.S. National Home Price Index, shows that housing prices have gone up by 25 percent over the last few years, and even though thatâ€™s an increase compared with all time lows, and based on scarcity not demandâ€¦ itâ€™s still unsustainable growth when looked at along side the utterly stagnant incomes during the same period.

Now, consider what other economists are saying about the relatively weak housing market.Â  The widely followed website, bankrate.com recently asked 25 well known economists what was causing the weakness in the housing market and below are what a few of them had to say.Â

As you read through the different views on the market, ask yourselfâ€¦ Whatâ€™s going to change in the next few years that would change what these economists are talking about?

Robert Brusca, chief economist, FAO Economics saidâ€¦ â€śBanks demand very high credit scores to get the best rates. Some existing homeowners are trapped because they are still underwater (that is, they can’t sell, so they can’t buy). While unemployment is low, there are many workers not even in the labor force. Wage gains and income gains are low. A lot of housing stock in areas that are less favorable may be hard to sell. Demographics of household formation are on an upswing, but it’s a slow upswing. Foreigners have been a big inflow into the U.S. housing market, and now the strong dollar is slowing this flow down. The strong dollar makes housing more expensive to foreigners.â€ť

Michael Fratantoni, chief economist, Mortgage Bankers Association saidâ€¦ â€śHousehold formation was slow until quite recently, mortgage credit has been tight (and still is, relative to the last 10 years) and population/household mobility has been low due to the loss of equity experienced by many owners.â€ť

Robert Johnson, director of economic analysis, Morningstar saidâ€¦ â€śTight lending conditions are the primary reason for a soft housing market. Potential borrowers still have to jump through way too many hoops to get a loan. The average FICO score of approved mortgages remains elevated compared to pre-recession levels.â€ť

Alan MacEachin, corporate economist, Navy Federal Credit Union saidâ€¦ â€śThe main reason the housing market remains relatively weak is tightened credit standards. The post-mortgage-crisis changes to mortgage underwriting and down payment requirements removed a significant layer of prospective buyers from the market all at once. Many of these will likely never qualify again under current standards. This development essentially shrank the real estate market, perhaps for decades.â€ť

Bernard Markstein, president and chief economist, Markstein Advisors saidâ€¦ â€śIf forced to pick a main reason, I would attribute the weakness to continued difficulty in qualifying for a mortgage (too-tight credit standards), even though there has been some improvement on this front over the last several quarters. Running a close second is fear of homeownership among many young people due to the bursting of the housing bubble and uncertain job prospects.â€ť

Sean Snaith, director, University of Central Florida Institute for Economic Competitivenessâ€¦ â€śThe overreach of new and pending financial regulations has weighed on the financial sector overall and on mortgage availability in particular. Weak wage and salary growth and a labor market still not fully healed are playing significant roles as well.â€ť

Phillip Swagel, professor of international economic policy, University of Maryland School of Public Policy saidâ€¦ â€śA mix of factors (is behind the weakness): modest income growth, unequal income growth, the need for larger down payments, and hesitation by potential homebuyers in the wake of the housing collapse.â€ť

Okay, so once againâ€¦

Ask yourself whatâ€™s going to change that would change the nature of or facts involved in those opinions?Â  Are wages expected to start rising?Â  No, I donâ€™t know anyone that thinks thatâ€™s coming any time soon.Â  So, whatâ€™s going to fuel an increase in demand for homes?Â  The answer isâ€¦ nothing.Â

Itâ€™s trueâ€¦ home prices are up of lateâ€¦ but itâ€™s because of the scarcity and thatâ€™s not a solid basis for price appreciation.Â  We should all expect a pull back ahead.Â

You should consider yourself warnedâ€¦