Home  »  IBANEZ & BACK: Attorney Glenn Russell Back in Front of the Mass Supreme Court – A Mandelman Matters Podcast

IBANEZ & BACK: Attorney Glenn Russell Back in Front of the Mass Supreme Court – A Mandelman Matters Podcast 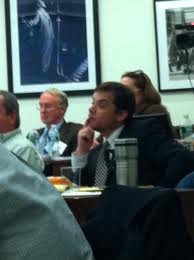 Massachusetts Attorney Glenn Russell, that’s him in the center of the picture above… sorry about the quality, I took it myself with my iPhone, when we were both attending Max Gardner’s special weekend symposium on the UCC as it applies to foreclosure defense, which was held a couple years back at New York University Law School.

Judge Arthur Schack was on Max’s panel that weekend, and many of the better known bloggers and journalists were in attendance as well, including Yves Smith of Naked Capitalism, Abigail Field, and yours truly… lol.  If you look behind Glenn to his left, you’ll see attorney Tom Cox of Portland Maine, who also came down to the Big Apple to rub elbows with the hoi polloi of the foreclosure crisis.

I know… that sound so ridiculous, but the weekend really did have that sort of feel to it, for whatever reason.  Everyone in one place and being in New York City, combined to make the experience a memorable one, even without Judge Schack’s commentary, which was wonderful as one would expect.

Glenn really become a rockstar foreclosure defense lawyer when he prevailed in the Ibanez case, which he argued in front of the Massachusetts Supreme Judicial Court.  At the time I wrote the following about the landmark decision…

“The decision surprised quite a few, and represented a major landmark for those on the foreclosure defense side of the fight.  Bank stocks got pretty much creamed after the decision was announced.  Foreclosure defense blogs went into sheer elation mode, and it’s easy to understand why… finally, a decision by a top court had gone their way, establishing that the rules of foreclosure weren’t some trivial set of technicalities.”

Well, fast forward to today and Glenn Russell is still very much on the attack on behalf of homeowners, in fact, he just finished arguing his latest case, again in front of the Massachusetts’ High Court.  I don’t want to give it away, except to say that it was the first time MERS business model has been to the state’s supreme court, and it could spell trouble for MERS in Massachusetts… if Glenn wins again, and we won’t know that for some time.

But, I asked Glenn to come on this Mandelman Matters Podcast to talk about his latest case and give us an update on what else he’s got coming down the pike, and even though he had a brief due in just a couple of days, he agreed.

DEFENDING HOMEOWNERS IN THE 2nd HIGHEST COURT IN THE LAND…