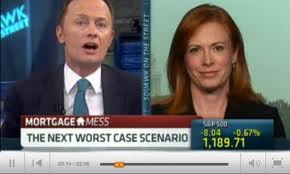 CNBC’s Diana Olick says the downturn in home sales is worse than expected. Ā I’m guessing she means worse than she and the cheerleading squad at CNBC expected, I’m not really sure… but it can’t be me she’s talking about, because the numbers today are nowhere near as bad as I expect them to get in the months ahead.

But, perhaps the more important point is that when Diana and I agree on anything… I’d have to say, bet on it. (And hat tip to @dylankramer in Chicago for bringing Diana’s coverage to my attention. Ā Follow him on Twitter, he’s a real smart guy.)

I’m sorry, but I’m starting to like watching Diana. Ā I never liked her when she was trying to gain an understanding of the foreclosure crisis, mostly because she’s a flagrant elitist, but she’s totally fun to watch talk about housing on CNBC because she seems to try so hard to deliver a balanced story, and she gets some things really right… but then every so often she turns a corner and attributes the wrong cause to the effect… and it’s a hoot, that’s all.

Like, this time out she’s right to say the housing market has real problems, but then she blames it on things like needing more new construction… she says we are “woefully low on the housing starts,” which almost made me spit out my coffee. Ā And she blames the downturn on the lack of first-time buyers, which she claims are only 28 percent of buyers and should be 40 percent. Ā I don’t know why I’ve changed my attitude about her, but for whatever reason I now find her adorable when she says things like that.

The only problems with what she’s saying is that: 1. The last thing we need now is new construction, in fact, that is the worst way I can think of to fix the low inventory problem. Ā 2. First time buyers are not supposed to be 40 percent of today’s market, and I’ll be pleasantly surprised to find out they are 28 percent these days, unless their aggregate numbers are abysmally low.

Diana doesn’t say enough about homeowners being underwater, but she does talk about credit being a big part of the problem.

“While home prices in California, and across the nation, are still well below their peaks of the housing boom, there is a major difference for home buyers today: credit. Mortgage rates may be lower on the 30 year fixed, but that wasn’t the product used during the boom. Adjustable rate loans with no down payment requirement and 1 percent “teaser” rates were popular. Those are gone today. Now, most loans are fixed rate products that require larger down payments and higher credit scores.”

And Mark Hansen, who is one of my favorite California-based housing market analysts and one that I didn’t know was being quoted by CNBC these days… pointed out that because of the realities of the credit markets, homes in California are MUCH more expensive today than they were during the peak bubble years of 2004-2008.

“Bottom line, on a monthly payment basis and relative to income needed to qualify for a loan, a house in California is far more ‘expensive’ than from 2004 to 2008, even though house prices are not back to peak levels,” said Mark Hanson, a California-based housing analyst. “Put another way, it costs a lot more today to pay for a house using a mortgage than it did from 2004 to 2008. Thus, if 2004 to 2008 was a “bubble,” then this must be, too.”

I’ve been making the same argument, but from the other side of the equation. Ā Mark’s a really smart guy on housing, and he’s turned around the same fundamental problem I’ve been writing about… the credit markets… to look at the impact on affordability. Ā And it’s a great point, not only for California, but for the rest of the nation as well. Ā Demand is just down and will remain so for some time… not forever, as someone who forecasts demand for the housing market has recently pointed out to me… the longer term trends will see Gen Y come into the market eventually, but it’s not going to happen next year or the year after that.

She also says that investor sales are one-third of all sales, but she neglects to mention that a significant drop from last year when investors and their all-cash sales machine was running at 50-60 percent of sales volume in the West.

“… the West has more recently been an indicator of what is to come for the rest of the nation. It was the first region to crash in the mid-2000’s and the first to show signs of recovery toward the end of the last decade. Now the tides have turned again. Ā Sales of existing home sales nationally fell 3.2 percent in October from the previous month, but in the West they were down 7 percent. The West was also the only region to see a year-over-year decline in home sales.”

Diana also points out that theĀ home price gains in Phoenix, that were running neck and neck with California’s at right around 25 percent, have since slipped back down to being up only 16 percent year-over-year, according to CoreLogic. Ā She says that “Phoenix home salesĀ fell 8 percent in September, despite a 32 percent jump in inventory, according to the Cromford Report.”

Ā No kidding? Ā Well, that should be news to… actually… no one. Ā Phoenix is not rising. Ā Here’s a quote from USA Today LAST JANUARY 13th.

“Phoenix, which has led the nation with rapid home-price gains, is among the first markets to see investors’ interest cool. Ā The percentage of Phoenix homes bought by investors fell to 28% in November after cresting at almost 36% in August and is now on a “clear downward” trend says Mike Orr, real estate expert at the W.P. Carey School of Business at Arizona State University.”

Of course, Lawrence Yun, Chief Economist for the National Association of Realtors (“NAR”), a man who has no capacity for shameless pandering whatsoever, is never worried because to him, there’s never bad news in the housing market. Ā He’s focused on the imaginary silver lining of inventory being down… it makes prices are go up, he says with a straight face. Ā I checked Larry’s bio and he got his Ph.D. at the University of Maryland, although it doesn’t say what he got his Ph.D. in… we’re to assume economics, of course, but since it doesn’t specifically say, I’m wondering if perhaps it was in Botany?

Diana is also in a bit of a tizzy over San Francisco inventories being down by 26 percent for the month of October as compared with September, and she says those lower inventory numbers are pushing buyers into condos, which again… is a very funny thought. Ā She supports her point about condo sales with a national statistic from the NAR, which claims that although homes sales were down four percent month-over-month in October… while condo sales were up by three percent. Ā It makes me wonder what happened to the condo buyers… could they have been pushed into trailer parks?

I mean, in Diana’s mind. here’s how the conversations must be going in San Fran these days…Ā

Husband: Honey, we may not be able to find a home to buy, inventories are down 26% in October, month-over-month.

Wife: Oh, no dear… what will we do? Ā We need a home now, darling and we’ll never find one in the Bay Area with inventories down by 26 percent month-over-month in October. Ā It’s not fair, darn it… it’s just not fair. (Cries)

Husband:Ā  Now, now… I know, honey, but we’re just going to have to face reality… it looks like we’re going to be pushed into a condo whether we like it or not.

Wife: (Cries, sobs) Oh, honey no… can’t we do anything to stop them. Ā Can they really push us like that?

Husband: I’m afraid so, hon. Ā There’s really nothing we can do to stop them… I’m so sorry dear. Ā I never wanted this to happen to you, but I’m no match for their national statistics. Ā They said condo sales were up three percent month-over-month in October, and they really meant it. Ā What can I do… those stats were national…

Wife: It’s not your fault, dear… I know you did your best to find us an actual home to buy. Ā But, if that’s our only option, I guess we’ll have to forego our dream of having a yard for the kids to play in. Ā There’s no point in resisting. Ā Wait… what about new construction?

Husband: No, I’m afraid not… that’s down quite a bit too.

Wife: Oh, honey… life’s not supposed to be like this.

Husband: Maybe we can find a condo with a large balcony where the kids can play?

Wife: Oh, Jim… do you really think we could?

Husband: We can try real hard, honey… I’ll call the Realtor and ask if she’d mind pushing us into a condos with a large balcony.

Wife: But, darling… nothing too high up, okay… Jimmy Jr. could chase after a ball and fall to his death.

Husband: Now, look… honey… we can’t be too demanding at a time like this. Ā We’re being pushed into a condo remember? Ā If we start making demands like that, we could be pushed into a cold-water basementĀ studioĀ in Oakland.

Wife: You’re right, dear. Ā Okay, never mind… I guess the risk of our four year-old falling to his death from a 30th floor balcony is just a risk we’ll have to accept.

Husband:Ā See… that’s my girl. Ā I knew you’d make it through this with your chin up.

Husband: Right, see… that’s the sort of can-do attitude I married you for… great point hon… shhh, wait… I’ve got the Realtor coming on the phone and she’s very busy… let’s see if she’ll push us into something we can all hope to live with.

Okay, so I’m just giving Diana a hard time… she’s got a tough job being the only CNBC voice not blaming the whole housing debacle on deadbeat borrowers who all bought home they couldn’t afford. Ā Instead, Diana doesn’t mention foreclosures at all… I guess they’ve stopped mattering so much, if at all. Ā We’ve settled in… foreclosures are here to stay. Ā So be it. Ā Are you happy, Rick Santelli… you jackass?

Now, click play below and see CNBC’s Diana Olick tell us that the housing market does not look good for next year… although she does throw in a line about there being hope for something changing by Spring… even she can’t come up with a rationale for that happening… it’s just naked hope at this point. Ā See what I mean? Ā Adorable.