I’m sure most have noticed that as of a couple of months ago, there’s been a banner ad at the top and on the right on the Mandelman Matters blog.  It’s there for Armor Guard, a corporate sponsor of Mandelman Matters and Mandelman Matters Podcasts.  For years, when companies asked if they could sponsor my site I politely declined, explaining that I didn’t accept any advertisers, but when the executives at Armor Guard called and then sent me their product to try… well, it didn’t take long before I was hooked.

I’m not kidding about this… Armor Guard is truly AMAZING… there’s nothing else like it.  And it comes with a No Questions Asked, 100% Money Back Guarantee.

I realize that not everyone pays attention to ads,  but this is one of those products is glad to have found.  I thought I’d give everyone a chance to hear about the product from Armor Guard’s CEO, Brett Saevitzon, so I invited him to be my guest on a special Mandelman Matters Podcast.  It’s only 10 minutes long, but I’m telling you… you’ll like it… and you’ll be really glad that you found out about Armor Guard… and why there is no other product like it.

Someone breaks a smart phone every couple of minutes in this country.  Don’t wait until it happens.

A couple of weeks ago, I got an email from a reader who wrote to tell me that she hadn’t purchased Armor Guard as of the prior week… and a few days earlier she dropped her phone out of her lap while getting out of her car, watching helplessly as it slid about ten feet on its face across the driveway.  The screen’s cracks looked like a spider web, but luckily it could be fixed… for $150 plus shipping.  She was also writing to tell me that she had bought Armor Guard for her newly repaired iPhone 5 and for her her son’s phone and her iPad that very day. 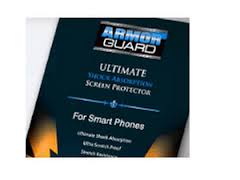 Armor Guard isn’t just some sort of scratch protector… it’s a rock solid, unconditional guarantee that your smart phone or tablet WON’T BREAK… period.  And if it ever does while using Armor Guard… the company will either fix it or replace it within 48 hours… ABSOLUTELY FREE.  No deductible, no questions asked.

They make Armor Guard for ALL MAJOR SMART PHONES AND TABLETS, including the iPhone 4 & 5… the iPad and iPad Mini… and smart phones and tablets made by Samsung, Blackberry, Motorola, LG and Kindle.. And for an extra $5 a month, they’ll even warranty your phone so that they’ll even replace it should you drop it in the pool.

You won’t believe how easy it is to put Armor Guard on your smart phone or tablet… there won’t be any bubbles left on your screen.  At 0.25mm thin and with HD Quality Transparency, you won’t even know it’s there… except that when you drop your phone in the driveway… you won’t even see a scratch.

SO, CLICK PLAY AND FIND OUT ABOUT THE ONLY WAY TO GUARANTEE YOUR SMART PHONE OR TABLET WON’T END UP COSTING YOU A BUNDLE WHEN YOU DROP IT…

BECAUSE YOU WILL DROP IT EVENTUALLY… EVERYONE DOES.  AND WHEN YOU DO THERE’S NOTHING THAT WILL PROTECT IT LIKE ARMOR GUARD.