Home  »  The Foreclosure Bowl: Connecticut Finally Makes it Into Top 10

The Foreclosure Bowl: Connecticut Finally Makes it Into Top 10 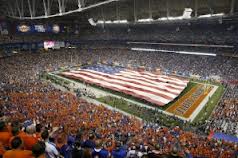 Understandably, Connecticut has always had a bit of an inferiority complex.  Wedged in just north of high profile states like New York, New Jersey and Pennsylvania, while looked down on by the erudite Massachusetts, the only state that even talks to Connecticut when the states get together is Rhode Island.  And it’s no secret that the rest of the New England states, Vermont, New Hampshire and Maine refuse to consider Connecticut part of New England.

At one time New York was thinking about purchasing the state of Connecticut, since as a practical matter it already uses the state as overflow housing for the fans of its New York sports franchises.  The idea was actually on the table for a short time, but problems arose when the leader of the Connecticut delegation asked if someone could define the term, “public transportation,” and further friction arose when the Connecticut native had to ask someone to use the phrase, “bus schedule,” in a sentence.

So, for years Connecticut’s residents had to be satisfied that their state led the rest of the nation in only two categories: More Jeep Cherokees per capita, and highest percentage of residents that have vacationed in Europe more then three times.

Well, as of April of this year, Connecticut has finally made it into the top ten in the Foreclosure Bowl… the state managed to post an increase of more then 94 percent over last year with 2,334 homes being lost to foreclosure in April.  The impressive growth in homes being lost represents a three-year high, the state’s spokesperson told CTPost.com just last week.

Even more encouraging was that majority of the foreclosure growth came from early stage filings, indicating that Connecticut could hope to see its ranking improve in the coming months.  “We’ll never be a Florida or Nevada,” a Misquamicut homeowner admitted to me under the condition that I wouldn’t disclose his name.

“We all feel like with a little more long-term unemployment and perhaps a default by one of the counties in the EU, we could run neck and neck with a Maryland or maybe even come in a close second to a North Carolina.”

RealtyTrac Vice President, the ubiquitous Daren Blomquist, said he had “no immediate concern” related Connecticut’s newfound foreclosure prowess, which makes perfect sense since he’s not losing a home there.  On the other hand, a survey of the 2,334 homeowners who lost homes to foreclosure in April, all 2,334 reported concerns they described as “immediate,” having to do with where they were going to live.

Apparently forgetting that his company’s report had shown most of the foreclosure growth coming from “early stage filings,” Dumdum attributed the state’s top ten status to a backlog of “deferred foreclosures,” common in states using a judicial foreclosure process.

A local economist, which is the sort of thing one only finds in a place like Connecticut, Ed Deak, said there is anecdotal evidence that there are people failing to make mortgage payments, but continuing to live in their homes for years before receiving a foreclosure notice.

And here we go again… do you see what I’m saying about foreclosure data… it’s crap, because if a bank doesn’t want the numbers to be too high, it simply doesn’t send out foreclosure notices and I do mean for years in many instances.  So, we have no idea how many foreclosures there are in a given state, because all the baks have to do to make things look like they’re improving is hold back mailing out notices.

Deak also thinks that the increase in activity is happening because the banks are finally starting to deal with strategic defaulters, which tells me all I need to know about local economist, Ed Deak.  A man entirely preoccupied with “irresponsible deadbeats,” not making their mortgage payments who, in his view, should be out in the streets.

Both RealtyTrac and CoreLogic report that 15 percent of the homes in Connecticut are underwater, so if you factor in the costs of moving and real estate sales commissions, would make the real number about 20 percent… assuming sales remain at their current trickle.

Of course, should more homes find their way onto the market, alongside the new torrent of foreclosures and upcoming short sales, prices will again fall and the percentage underwater will rise further, thus increasing the number of foreclosures once again.

Oh, come on… tell the truth… this is so stupid it’s kind of getting fun, right?