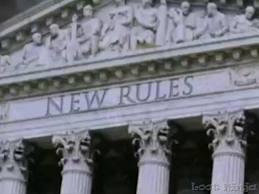 The Illinois Supreme Court is the latest to get in the âHelp Stop Foreclosuresâ game… which by the way can also be played at home… is no fun for the whole family and makes for lovely graft.Â  (Hey, if that didnât make you laugh, you should go lie down.)

The new rules are are the result of public hearings and 21 months of work by the “Special Supreme Court Committee on Mortgage Foreclosures,” which was the brian child of Justice Mary Jane Theis.Â  The committeeâs 14 members included judges, a public interest attorney… and get this… bankers and their lawyers.Â  (Oh, boy… Lucy you got some âsplaining to do… somebodyâs fired for sure.)

NEW Supreme Court Rule 99.1, which deals with requirements for foreclosure mediation programs in the Circuit Courts and counties.

NEW Supreme Court Rule 113, which sets out required practice, procedure and notice obligations by the lender as plaintiff and and is directly aimed at the objectionable practice we all know as of robo-signings by requiring submission by the lender’s representative of a prove-up affidavit.

NEW Supreme Court Rule 114, which requires that a lender attest in an affidavit that it has complied with the requirements of any loss mitigation program that applies to the loan.Â  It also says that without said affidavit, a judge many deny entry of a foreclosure judgment.

But wait… thereâs more. It kinda feels like Christmas in Illinois, doesnât it?

1. If a homeowner loses a foreclosure case by default because of a failure to appear in court, the clerk of the court will be required to send a clear notice to the homeowner explaining what occurred.

That seems only fair.Â  I think if you lose your house to foreclosure, someone should at the very least drop you a note.Â  Iâd even vote yes on a phone call being made… but a note is fine.

2. Lenders and servicers will be required to send a specific notice of the sale date to all homeowners, rather than just advertising it in a newspaper.

Advertising in newspapers is so cold… so impersonal.Â  Personally, I think that lenders and servicers should also be required to send a tasteful sympathy card… maybe even some candy.Â  Or, wait… let me guess… that would mean no more loans will be available in Illinois and higher interest rates for all borrowers? Â Gotcha’.

3. Every foreclosure lawsuit MUST now include a copy of the note signed by the mortgagor, INCLUDING all endorsements evidencing the transfer of ownership of the mortgage.Â  This new rule is said to have been put in place âto alleviate some of the confusion caused by the frequent transfer of mortgages and lawsuits being brought by entities unknown to the borrowers.âÂ  (Confused borrowers?Â  Okay, thatâs playing it a bit over the top, wouldnât you say?)

Oh, no you didnât.Â  Did you hear that?Â  What was that loud flushing sound?

“There can be no ‘win-win’ in a process that is as painful to homeowners as foreclosure.Â  But the process should be fair.Â  These rules remedy or mitigate questionable practices such as robosigning; speed up the process to hopefully shorten the blight on communities through boarded-up homes, and provide a certainty that will enable foreclosed homeowners to examine loan modification options or proceed on a new path.”

Here’s the Illinois Supreme Court’s announcement on the new rules… but you should also probably know that Illinois also has some new rules that will fast-track foreclosures on abandoned properties, and you can read about that HERE, if you’d like.

Iâm pretty sure that the State of Nevada was the first to pass a law that effectively brought foreclosures to a screeching halt beginning in the Fall of 2011.Â  The month following AB 284 becoming law in Nevada foreclosure filings in Clark County dropped from 5,000 a month to 800.Â  Why?Â  Itâs simple, really…

First of all, in Section 9 of AB 284, it states that those seeking to foreclose must file a notice of breach and of the election to sell (also known as a notice of default), to include a notarized affidavit.Â  It also allows homeowners to seek damages and an injunction against anyone who acts contrary to NRS 107.080 during the foreclosure process, and it imposed stricter criminal penalties for anyone who purposely tries to defraud a homeowner by making a false representation or recording a false document.Â  Thereâs a $5,000 fine in in there as well, for filing a false document in the public records.

The State of Hawaii took a similar shot at a legislative response, but Act 48 only applied to the stateâs non-judicial foreclosure process, and within weeks of its passage, Fannie Mae announced that it would no longer be foreclosing non-judicially, instead they would use the stateâs judicial foreclosure statute.Â  As a result, Act 48âs dispute resolution process has been used by… well… no one, really.Â  (Or, if thatâs not correct, maybe the numberâs 14, or something close… which to me is still no one.)

So, just a year and one month later, Hawaii fired another legislative shot across the bow of those seeking to foreclose in Hawaii, withÂ  Act 182… 183 pages designed to improve on Act 48… that became law in Hawaii on June 28, 2012.Â  Among other things, the new law requires an âattorney affirmation statementâ which requires the foreclosing bank to provide a lot more proof that the bank has proper standing to perform the foreclosure.

Act 182 was supposed to have a provision preventing deficiency judgements, but darn the luck, that provision somehow didnât make it into the final version of the law, so when foreclosures do get moving again, homeowners will want to make a deal with their bank so that no deficiency judgment is entered.Â  (If it were me, I might try the old favorite… drop the deficiency judgment or Iâll fight tooth and nail for years, while I store all the fish I catch in the walls.Â  Kidding… Iâm not suggesting that… just kidding… sort of.)

According to Hawaiâi Life, a panel of of attorneys that represents banks said that Act 182 might speed up the foreclosure process, which wins the Mandelman Matters Stupid Statement Award for 2012.Â  The point is… foreclosures in Hawaii have slowed to a crawl, and the courts look like they could be backed up for years as the judicial foreclosure process slogs along.

And I called it a month ago for California, where the new Homeowner Bill of Rights will soon prove itself more than adequate as far as stalling non-judicial foreclosures goes.Â  Banks, although currently still largely in denial, will soon be getting ready to foreclose judicially… so, in California itâs basically bye-bye to servicers… see you in 2014 at best, assuming thereâs nothing more onerous in place by then.

Although not talked about much, on November 1, 2012, a new Massachusetts law went into effect, giving judges the power to rule on whether a bank can foreclose on a home or must modify the mortgage.Â  Known as the âAct Preventing Unlawful and Unnecessary Foreclosures,â it basically creates a new obstacle course for banks and servicers seeking to foreclose on borrowers not making their payments.

So, now lenders and servicers will have to prove to a Massachusetts court that they made âa good faith effortâ to work with delinquent borrowers, and that they took âreasonable stepsâ to avoid foreclosing, like considering whether the borrower could make a lower, âaffordable monthly payment.â

And if that wasnât enough, the new law also requires lenders to prove that they come out ahead by foreclosing and selling it in a distressed sale than by modifying the mortgage… which will be next to impossible, or at best… time consuming as all get out.Â  (And Lord help you if the judge wasnât a math major.)

Even the federal government is changing the rules pertaining to foreclosure as related to borrowers applying for loan modifications.Â  The new federal rules donât take effect until January 2014, but if you want something to look forward to… hereâs a rundown of the new requirements:

B. If a borrower applies for a loan modification at least 37 days before their foreclosure auction is scheduled, the servicer will now be required to consider and respond to the request, and servicers will also have to give the borrower enough time to accept an alternative to foreclosure before proceeding with the sale.

Here’s the new federal rules, brought to you by the Consumer Financial Protection Bureau…

According to the National Conference of State Legislatures, last year 25 states had bills proposing consumer-friendly changes to existing laws governing the foreclosure process.Â  But none of my regular readers should be the least bit surprised by any of this… because LAST JULY, 25th… I wrote an article saying quite specifically that this very thing was about to happen… âMortgage Servicing – The Winds Have Shifted, the Pendulum is About to Swing.âÂ

(See… read me… it makes you smarter than everyone else.)

I wrote about it even earlier than that… remember what I said over a year ago about the state budget deficits?Â  What would happen in 2013 and 2014?Â  Austerity… higher taxes… cuts to important services?Â  Iâve written on numerous occasions about how thatâs when politicians would see the light… when they felt the heat.Â  And how about the times Iâve written about how Weâre Just Not Going to Fix the Foreclosure Crisis Going to Court?Â  Anyone… anyone?Â  (Iâve been so right about this whole thing for four years that itâs getting boring… LOL.)

And finally… last year New York’s assembly was said to be considering a measure that would criminalize foreclosure paperwork forgeries.Â  Iâm not sure how that ended up, but donât worry… Iâm sure itâll be back.Â  Not that it matters all that much… according to RealtyTrac, the average foreclosure in the Empire State now takes 1089 days… thatâs roughly three years and thatâs only an average… as compared to the national average of 414 days.Â  An average of 1089 days means there are plenty that take even longer… four years?Â  Do I hear five?

By the way… I talked to a woman in Pennsylvania who hasnât made a payment in nine years.Â  So, I told a banker I know about her and he replied, âWow… she should write a book.âÂ  LOL… heâs a funny banker.

P.S. Iâm not going to ruin your happy day, but be sure to catch my column next week because Iâll tell you then why, in reality, none of this is actually good news for homeowners.