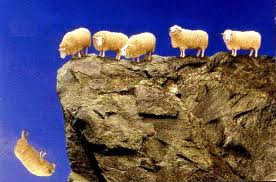 A four percent increase in retail holiday sales is considered a “healthy season.”  Analysts forecasted retail sales this holiday season would grow by 3 to 4 percent, because I suppose they had bought into headlines about happy days being (almost) here again.

Well, guess what?  Will wonders ever cease, analysts were once again “surprised.”

On Tuesday, the MasterCard Advisors SpendingPulse report, which tracks holiday spending on popular products showed that in the two months before this Christmas holiday sales rose 0.7 percent over last year.  And last year wasn’t exactly one that could be described as “going gangbusters,” if you get my drift.  In point of fact, 0.7 percent growth was the weakest since we were in the midst of deep recession in 2008.

How could this have happened?  Everything was coming up roses, right?  What could have gone so horribly wrong?

Are you ready?  This holiday season’s shopping was derailed by “bad weather and consumer uncertainty about the economy.”  Darn that fiscal cliff again, right?  Were it not for that darn fiscal cliff, I would have bought so much more stuff, I cannot even tell you.

As to “bad weather,” well in terms of excuses, I’m sorry but that’s just sad.  “Bad weather” is not even trying to come up with a believable excuse for the worst holiday sales since deep into the recession of 2008, the year GM missed its sales forecasts by something like 2.5 million cars, if memory serves and I’m quite sure it does.

Besides, Hurricane Sandy may have put a real crimp in Halloween candy sales, but Christmas sales?  Come on… if anything, look at all the stuff people needed for Christmas in Atlantic City.

Well, I’m just so relieved that none of this dismal economic news was caused by the respective economies being in deep recession led by unreported worsening unemployment and pretend housing market recoveries.  Because if those things were the cause, why then we might have something to worry about.  So, whew… dodged a bullet there, wouldn’t you say?

The Atlantic published a terrific chart to illustrate what’s missing in our nascent-at-best economic recovery, shown below… 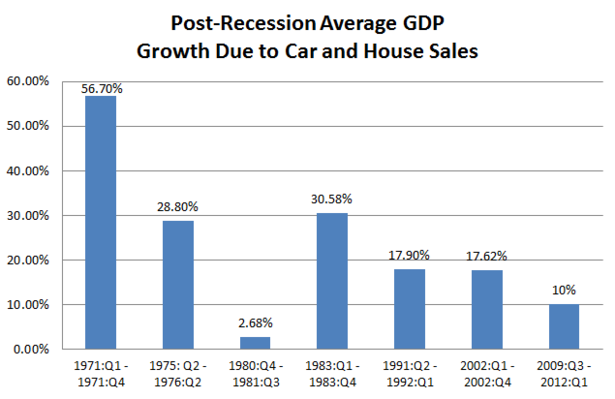 The author of The Atlantic’s article, Derek Thompson said it as well as I could have hoped to, and his punctuation far exceeded anything I would have offered, so I’ll just quote his line following the chart…

“The message is that home and car sales power recoveries. This recovery is different from all others because we just. Aren’t. Selling. Enough. Houses.”

Derek goes on to explain that the reason we’re not… Selling.  Enough.  Houses. is that “household formation” has been way down throughout this recession… I mean, “this recovery.”  And there’s no question that’s one of the reasons.

Unemployment among twentysomethings has been terrible… as of February 2012, just 54 percent of 18-24 year olds had jobs according to the Pew Research Center.  Huffington Post reported that number as, “the lowest employment rate for this age group since the government began keeping track in 1948.”

Since ’48 when the government started keeping track, so that means it could be the lowest since ’38 too… or ’28, for that matter?  The point is, it’s the lowest employment rate for that age group since a really long time ago. 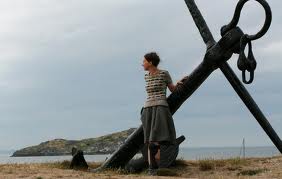 Student loan debt is another anchor hanging about the necks of our twentysomething college grads, and that it’s delaying family formation shouldn’t be hard to figure out.  I mean, nothing says move-back-in-with-parents like being out of work and a couple hundred grand in debt, right?  And if you’re a girl, it’s got to be like the anti-dowry.  I mean, can you fall in love with an English major who owes a quarter of a million that can’t be discharged in bankruptcy?  Yeah, she’s hot… but come on now.

The Atlantic article used a chart from Credit Suisse that illustrated the drop off in household formation nicely, as shown below… 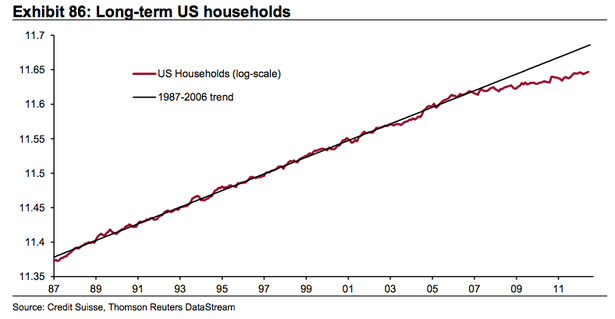 Yep, household formation kind of veered off course there, wouldn’t you say?  And yes, that certainly is one of the many reasons we’re not Selling.  Enough.  Houses. As I wrote in my article a little over a week ago, “Talking up the Housing Market“…

“The particularly bad news is that homeownership among the younger demographic groups dropped the most in each of the last five years.  In fact, overall homeownership among those between age 25-44 has declined at double the rate of the overall decline.  The only age group that did not seen a decline in homeownership in 2010 and 2011 is the age 75+ group.”

There are, however, many other reasons our young people have an apparent aversion to buying homes.  Like, how about because they’re NOT STUPID, and since let’s say 20 million of them have watched their elders either lose homes to foreclosure or go through the stress of being underwater and at risk of losing homes, that they’re just not going to rush into the same mistakes we did.

Oh, and then there’s credit markets that are tighter than Dick’s hatband, as I’ve heard them say in the South.  And that pesky requirement for a downpayment that Fannie and Freddie are so hot about.

The point is, there’s quite a few factors that are likely causing the younger set to sit on the sidelines of the housing market for quite a bit longer than usual.

Derek’s article in The Atlantic starts out making strong points for what’s not happening, but like every single other piece of baseless optimism found in print today, he then says our problems will soon be over…

“Okay, but here’s the good news. Household formation is miserable now, but it’s projected to pick up for a simple reason: an improving economy is bound to encourage young people to get out, buy apartments, and get married, eventually. How fast they start gobbling up apartments and houses is unclear. But Credit Suisse makes three projections: No recovery (unlikely), strong recovery (possible), and consensus recovery (plausible).”

And that, ladies and gentlemen, is a testament to why no one should ever invest a dime based on the drivel that comes out of a broker-dealer like Credit Suisse.

A “simple reason?”  Because the improving economy we can’t see is soon going to encourage young people to forget about their need for jobs… forget about their student loan debt… and cause them to run out and become the next wave of foreclosures?  I’m afraid Derek has done gone and lost his mind.

And when will it happen?  Eventually?  Oh, cool… eventually.  No problem, I think the economy can wait until then.  And how fast will they start gobbling things up?  It’s unclear?  Well, alrighty then.

So, based on “eventually” and “unclear” being the operative terms in that paragraph above, I see exactly how Credit Suisse came up with the ideas that the “strong recovery” would only be “possible,” while the “consensus recovery” scores a rip-rooting “plausible.”  Those guys at Credit Suisse are a babbling brook, let me tell you.

There’s no reason to think that young people are going to change their house buying habits to anything close to what ours were before housing’s Great Collapse of 2007.

In fact, I’d have to say that one thing young people are fairly good at is not following the idiotic footsteps of their parents, so with another five million foreclosures in the foreclosure pipeline, according to LPS, by the time we’ve let that disaster play itself out, I’d imagine we might just find out that we have an entire generation thinking that a good time to buy a home is once they’ve saved up enough cash to buy one outright.

And, so very nicely done there.  Keep it up, just keep it up… and you’ll soon put an end to whatever potential we’ve got to recover yet.  By the way, I wonder who President Obama is going to appoint as the country’s Sales Prevention Czar now that DeMarco is leaving the FHFA?

Look, I’ve stopped caring about the nonsense that people obviously want to believe.  You want to believe that this country can just throw 10 million people out of their homes, treat them like deadbeats, torture them through loan modifications and then foreclose using documents signed by Mickey Mouse and notarized by Donald Duck without so much as an explanation… and then somehow just magically recover as the next generation comes into its own… then fine.

But, you are high on something, sure as shootin’.

And by the way, it might interest you to know that even LPS isn’t buying the recovery in the housing market gibberish.  About prices rising, LPS’ Mortgage Monitor report for October 2012 just says things like, “Overall sales volume remains low with distressed transactions at historic highs.”  And, “FHA still supporting highest risk borrowers.”

I don’t think low volume, high distressed and FHA as the new sub-sub-prime are indications of any sort of housing market recovery… I suppose I could be wrong about that… in Loopy-Doopy Land.  But not here though.

As to the reduced number of foreclosures in some states, LPS says…

Wasn’t someone just saying that we weren’t going to win this in the courts, but rather in the state legislatures?  I could have sworn someone was just recently pointing something like that out.  Of course, I know… no one likes hearing that stuff, so don’t let me screw up your day… carry on…

“NMS drove a drop in FC starts; expect a rebound in coming months.”

A rebound?  Oh goodie, everybody loves a rebound… just not when it’s in foreclosure starts.  Is any of this ringing any bells for you?  It ain’t over, my friends… not even close… not by a long, long, long shot.