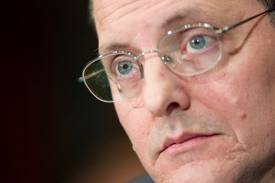 You know, I was having kind of a crummy day… nothing serious, just dragging my feet a bit and grinding through some writing I‚Äôve been working on for too long… and thinking about how nothing is changing… and then out of the blue it happened… and I started smiling right away… kicking my heels up a bit… even opened a cold beer to celebrate the news.

Nick Timiraos, at the Wall Street Journal, is reporting that the Obama Administration is replacing Edward DeMarco, the current ‚Äúacting‚ÄĚ director of the Federal Housing Finance Agency, the conservator for the failed mortgage behemoths Fannie Mae and Freddie Mac.

This past year, Ed single-handedly transformed his otherwise obscure position lurking in the bureaucratic shadows of an agency born less than five years ago that few had even heard of, becoming the most hated man in Washington as far as homeowners at risk of foreclosure are concerned.

In the Wall Street Journal article, Nick points out…

‚ÄúMr. DeMarco has become a lightning rod for criticism over the shortcomings of federal housing policy and has at times thwarted White House initiatives, including an effort to launch a targeted principal-reduction program earlier this year.¬† Liberal political activists have called on the president to fire him (which isn‚Äôt easy to do). His agency has also been criticized by some economists for being too timid to address the housing and mortgage bust.‚ÄĚ

Timid?¬† DeMarco may be many things, but he‚Äôs not timid.¬† He has stared down the most powerful man in the country when he wanted Fannie and Freddie to reduce the principal balances on loans, and he ignored President Obama and numerous members of congress too. 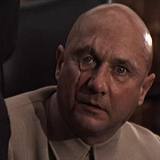 DeMarco has been like the Bond villain of the horror movie homeowners have been living in since 2007, ‚ÄúEvictions Are Forever,‚ÄĚ or maybe, ‚ÄúYou Only Default Once.‚ÄĚ¬† Whenever the question of principal reductions for loans owned by Fannie or Freddie has come up, Ed plays ‚ÄúDoctor No.‚ÄĚ

When Freddie‚Äôs at your door… you can‚Äôt run and you can‚Äôt hide… it‚Äôs a double feature: ‚ÄúNightmare on Your Street.‚ÄĚ¬† Followed by ‚ÄúInvasion of the Condo Snatchers.‚ÄĚ¬† Evicting everyday in neighborhoods everywhere… Rated ‚ÄėR‚Äô for Rat.

I‚Äôve always fantasized about meeting him one day just so I could shake his hand and say, ‚ÄúDude, you really need to think about getting some sun.‚ÄĚ¬† I mean, seriously, what would you call his skin color?¬† Bloodless?¬† Ghastly gray?¬† Blanched paste?¬† Pallid putty?¬† I‚Äôve seen it somewhere before… he looks about like the color of the white Play Doh, remember?

Ed DeMarco is the most caucasian man on the planet.¬† He makes Tim Geithner look like Biggie Smalls. ¬†Some say that when Ed enters a room, the temperature falls so fast you start seeing your breath.

Okay, but seriously… according to Timiraos‚Äô article…

‚ÄúAdministration officials are still gathering names of potential nominees and haven‚Äôt pared down to a shortlist or interviewed candidates, according to people familiar with the matter. White House and FHFA officials declined to comment.‚ÄĚ

If you want my opinion, don‚Äôt get too excited… it‚Äôs not like Obama will be appointing Liz Warren or anyone like her, more likely it‚Äôll be one of Tim Geithner‚Äôs minions and won‚Äôt that be exciting for everyone.¬† I don‚Äôt really know, but if the past is any indication of what will happen in the future, well you can dig it, right?

Ed DeMarco: Slow on the Up-take and Absolutely Gifted at Overstating the Obvious

A couple of weeks ago, Ed, while speaking at a meeting of the Securities Industry and Financial Markets Association (‚ÄúSIFMA‚ÄĚ) told its members that… are you sitting down?

“The secondary mortgage market infrastructure that served this country for many years is broken.”¬†¬†

And what exactly happened next, I can‚Äôt help but wonder?¬† I wasn‚Äôt there to see this revelation come to pass, so did the crowd go wild?¬† Did anyone audibly guffaw?¬† Break into tears and start sobbing?¬† What the heck happens when someone in such a position of authority over the lives of so many millions comes out and says something like that?

Me personally?¬† I would have needed to find a dinner fork fast and plunge it at least an inch deep into my thigh… just to stop the pain… or prevent myself from falling out of my chair from laughing uncontrollably.¬† I would have had to be removed.

That‚Äôs just brilliant insight Ed, you witless dolt.¬† And it‚Äôs not correct to say ‚Äúis broken,‚ÄĚ at this moment in time.¬† It was BROKEN FIVE YEARS AGO.

Obviously, Ed doesn‚Äôt get out much and that can be a negative when looking for a job these days, so with that in mind, here are a few other things I think I Ed should bone up on before he hits the job market. ¬†¬†

President Nixon resigned, try not to take it too hard.

The star of ‚ÄúBedtime for Bonzo‚ÄĚ was actually elected president… TWICE.

Some girls don‚Äôt dry clean their dresses for a very long time.

Are you with me, Ed?

According to Mortgage News Daily, Ed went on to say…

It is not effective when it comes to adapting to market changes, issuing securities that attract private capital, aggregating data, or lowering barriers to market entry he (DeMarco) said.¬† There must be some updating and continued maintenance of the government sponsored enterprises securitization infrastructure, “and to the extent possible, we should invest taxpayers’ dollars to this end once, not twice.”

We‚Äôre having a foreclosure crisis , Ed.¬† Are you aware of that… you must be.¬† Why don‚Äôt you ever mention that quirky little detail.¬† We‚Äôve lost five million homes to-date, Ed.¬† Five million.¬† So, what exactly should taxpayers be paying for now?¬† ‚ÄúUpdating and continued maintenance of the government sponsored enterprises securitization infrastructure?‚ÄĚ¬† F#@k you, Ed.

Our bailouts have deprived our financial execs of a learning opportunity…¬†

Ed really delivered a very technical and incredibly boring speech, in my view, but more than that he came off sounding like our government is actually in control of stuff… and they‚Äôre clearly not.¬† The room must have been absolutely overflowing with pompous, self-important blowhards in pricey suits and custom made shoes, who made their money through a 30-year bull market, as they also destroyed our nation‚Äôs economic and societal underpinnings.

In other words, a room full of people born on third base thinking they all hit triples that screwed up so badly they should all be near homelessness today, if not in jail, but who were bailed out royally and as a result, now don‚Äôt even think they did anything wrong.

Ed explained that there are ‚Äúmany views and many important issues about access to credit and fair treatment for borrowers, and fostering a competitive primary and secondary mortgage market.‚ÄĚ¬†

Yawn… huh?¬† Sorry, I dozed off there for a moment.¬† Okay, commence your fostering.¬† Wake me after nothing has worked.

Then he said… ‚ÄúBut if we really are serious about expanding the private sector’s role in housing finance, we must consider what types of changes are necessary to bring private capital back to the housing finance market.‚ÄĚ

See… this is hysterical.¬† These guys actually think they can bring private capital into the housing finance market by considering what types of changes might be necessary… they think they‚Äôll be able to figure it out, and everything will be groovy and profitable once again.¬† They really believe they‚Äôre the smartest guys in the room… or on the planet.

The truth is, they don‚Äôt really know how they succeeded, and with our $16 trillion bailout of everything financial, we deprived them of the learning experience that would have otherwise been available to them.¬† And so they learned nothing from the melting down of the global financial markets… nothing.

For the most part, all they seem to think is that we had a recession, but these things are cyclical and it‚Äôs over now, and they‚Äôre all hopped up and ready to get back to their careers binging and pillaging because, after all, that‚Äôs what they‚Äôre so good at… they think.

They are deluding themselves.¬† Perhaps they would have learned a few things from our economic and financial collapse, had we even allowed them to drop to one knee, if not collapse… but we didn‚Äôt even do that.¬† Instead, it is obvious from reading about this meeting and the content of DeMarco‚Äôs speech, that by bailing them out so thoroughly and so quickly, we eliminated the potential for any real learning to occur.

The truth is… with QE forever in place, we‚Äôre still bailing them out today and the somewhat terrifying result, it seems, is that many barely even remember what happened in 2007 to bring us here.

Some seem to want to believe that it is because of the government stepping in that private money has stepped out, but that‚Äôs precisely what I mean when I say they can‚Äôt remember what brought us to this point.

The private securitization market is broken because the Wall Street investment banks in conjunction with some of the most predatory sub-prime lenders the world has ever known, combined to fraudulently package mortgage-backed securities, wrangled their way into Moody‚Äôs AAA ratings, and either sold them, or repackaged them into collateralized debt obligations, thus taking on in more amounts of leverage.

We all should know what happened next, so the only points I‚Äôll makes are these:

One thing I am looking forward to in the near future is reporting on how DeMarco‚Äôs assumptions were wrong and how he should have lowered loan balances to prevent future foreclosures instead of waiting for them to happen.¬† It‚Äôll be too late to change anything, of course, but it will still be gratifying to rub his myopic idiocy in his cadaverous countenance.

So, goodbye Mr. DeMarco… I sincerely hope you are are hit by a life event while underwater in your mortgaged home and your loan is serviced by Wells Fargo, and owned by Freddie Mac.

¬†Remember the Goodbye song from The Sound of Music? ¬†

Well, below is my idea of what we can all sing to Ed.

All these years we‚Äôve been saying only one special prayer

Perhaps millions have said it too

Caused damage that we can’t undo…

Your work was uninspired

No one could get you fired

I‚Äôm glad that now, you‚Äôll be out of our sight.

Now that you‚Äôre gone, perhaps we will pull through

You made bad rules, and forced us to comply