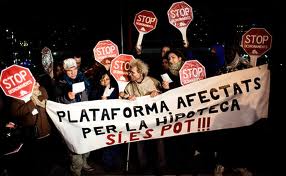 This past week BBC News reported that a woman in northern Spain, Amaia Egana, 53,  a former politician jumped to her death from her fourth floor apartment… just as officials were arriving to evict her from her home.  And last month, another man in the southern Spanish city of Granada… a newsstand owner… also apparently committed suicide right before his home was to be repossessed by the bank.  He hung himself.

Since Spain’s residential real estate market crashed in 2008, it is estimated that 350,000 families have been evicted from their homes, but Amaia Egana’s recent death, just like one to many straws carried on the back of a camel, has inflamed public anger at Spain’s banks, who are increasingly being accused of heartlessness.

A banner held up by supporters of Rayo Vallecano, a Spanish soccer team that plays in a working class district of Madrid, read…

“They’re not suicides. They’re murders. The banks and politicians are accomplices. Stop the evictions!”

And there have been demonstrations throughout Spain, with an organization called “Platform for Mortgage Victims” blocking access to homes to prevent evictions. 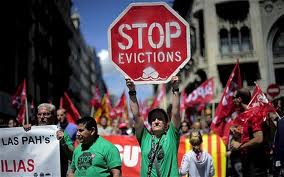 “In Spain right now, we have nearly a million empty housing units. In this situation, the government and the economy ministry … has to take steps so that no family in good faith goes without a home.”

The increasing amounts of public pressure has driven Prime Minister Mariano Rajoy to call for officials from his conservative People’s Party and the opposition Socialists to increase the pace of negotiations intended to reform the country’s eviction laws.  In addition, both political parties were expected to consider the possibility of granting moratoriums on mortgage payments for families enduring the greatest financial hardships.

De Guindos also said it was important to find a bipartisan solution to the problem.

“We must make an effort, because at the moment we are living in a country where there’s a difficult social situation because of the evictions.”

“The government is aware of this and all of us – the government, the opposition, all the social forces – must make an effort so the most vulnerable families, the families in trouble because of the crisis, don’t lose their homes. We’re all in this situation together.”

However, the Spanish Banking Association (AEB) has said that last week its members agreed with the government to suspend eviction cases for two years for those most in need.  In a statement issued by the AEB last week, the bankers said…

“This shows the commitment of the AEB’s members, for humanitarian reasons and because of their social responsibility, to stop evictions during the next two years in those cases of extreme need.”

Protesters have been quick to point out that what the AEB is offering will not go far enough as many thousands of Spain’s homeowners will face serious difficulties in the next few months.

OKAY… Everybody please just STOP.  Or rather, I mean… ALTO!

I first wrote about Spain’s housing-based economic woes back in September of 2011.  My article’s headline was musically themed, “There’s Pain in Spain as Banks Go Down the Drain… Let Me Explain.”  And maybe it was too darn clever by half because not enough people read it.

It explained that when the financial crisis hit in 2008, it seemed that Spanish banks were in better shape than most, primarily because of stricter regulations that prevented them from making the same mistakes that other banks had made.

But… guess what?   As it turns out, Spain’s banks were heavily exposed to the real estate market, and now… if you’ll pardon the mixed musical metaphor… they’ve got TROUBLE… with a capital ‘T’ and that rhymes with ‘P’ and that stands for “Pool de Hipotecas,” which is Spanish for “Mortgage Pool.”

I just can’t get over how familiar the facts of this story sound to me… why is that, darn it?  It’s driving me crazy, like when I can’t remember who played the Professor on “Gilligan’s Island,” or something like that.

(It’s Russell Johnson, by the way… that’s who played the Professor on “Gilligan’s Island,” and that useless fact I have no trouble remembering.  Where I’m supposed to be tomorrow at three… I have no idea.)  Okay, sorry… it’s just that it’s nagging at me… never mind… we’ll come back to it.

There are two really interesting things about Spain…

The first thing is that Spain doesn’t have “irresponsible homeowners” that are causing the residential mortgage loans to default, like we do here in the good old U.S.A.

In Spain, lending to homeowners was far more prudent, so the story goes, and as a result, Spanish banks are not being left holding large amounts of bad loans as the country’s residential mortgages increasingly go into default.

(And if that last paragraph is making your hair hurt, just let it go, okay?  Of course, it makes no sense whatsoever, but who am I to question the venerable New York Times, which is where I found it.  Just take a deep breath and let’s press on…)

In Spain, it’s not the “irresponsible borrowers” that are causing the problem, instead it’s Spain’s “irresponsible real estate developers and construction companies” that are at the root of all economic evil.  Sí, es verdad.

And so that was one thing I found interesting about Spain’s housing crisis, but now these latest developments are showing me something that’s a much more meaningful  difference between Spain’s foreclosure crisis and ours here in the good ole’ USA.  And maybe it’s all linked together…

The people of Spain apparently have empathy and dare I say compassion for those who have fallen on hard times, and they don’t want them to be thrown out onto the streets… evicted, to use the technical term.  The people are demonstrating and the politicians in both parties are paying attention.

Why isn’t any of that stuff happening over here?  What’s up with us?  I think it’s because we’re blaming “irresponsible borrowers” instead of “irresponsible others” for our economic woes that has left us without even a modicum of compassion for those losing their homes to foreclosure.

I can’t even count the number of homeowners who have found themselves in foreclosure, fighting to keep their homes… and they’ll say to me: “And it’s not like we were irresponsible in our choice of home… you know… like some other people were…”

Well, maybe those “other people” weren’t irresponsible either… did you consider that?  Maybe they’re just like you, swept under by the worst economic downturn since the Great Depression.  Could that be it?  Or do they just look like irresponsible types?

Look… get a hold of yourself.  Forgetting about the tiny percentage of people that were speculating by buying properties they never expected to hold onto more than a month or two… or the 26 year-old who bought an $11 million pad on the water with income from a paper route… NO ONE INTENTIONALLY BOUGHT A HOME THEY COULDN’T AFFORD.  NO ONE WOULD EVER DO THAT ON PURPOSE.

It’s 2013… can we please stop looking to punish the guy next door because he remodeled his kitchen in 2006, or bought a pair of Jet Skis in ’05?  Good for him anyway.  Maybe if you’re nice to him, he’ll let you ride one next summer at the lake.

And while we’re at it… let’s start recognizing that we all need to understand what our options really are… choose the path that we fit on and that fits our needs… and then let’s get to work doing what’s required to achieve our individual objectives.  Help is not on the way.  It’s up to us to save us.

Want to know what won’t work in that regard?  Attacking each other… lying about what’s working and what isn’t… being in denial and and blaming others for where we are today, when we’ve done nothing to change our circumstances since we last made a mortgage payment in 2010.

Spain has lost 350,000 homes to foreclosure since 2008… we lose that many every hundred days or so, but if I so much as mention the idea that evictions shouldn’t happen in this country and about half of those who hear me suggest such a thing will want me strung up for being a Communist.

And please… Shhhhhh…. try to keep your voice down when discussing this subject among your friends of like mind.  We don’t want to disturb our president.  He’s taking a nap as far as the foreclosure crisis is concerned and we don’t want him to overhear our whisperings about there being some sort of crisis going on.

What’s happened to us in this country?  When did we stop caring about each other?

We used to be the greatest country in the world… and not because of our credit scores… not because of what we drove around town… because we’re the land of the free and home of the brave… a place of limitless opportunity… a place dedicated to the proposition that all men were created equal.

The UNITED STATES of AMERICA.  A place where we cared about out neighbor regardless of his religion or skin color, sexual orientation, or financial prowess…