Home  »  President Obama on The Daily Show with Jon Stewart

President Obama on The Daily Show with Jon Stewart 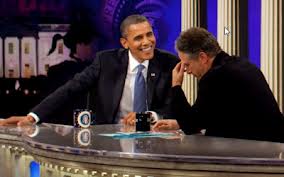 Among other things, he used the phrase “not optimal” when responding to Jon Stewart’s questioning about how the tragedy in Libya was handled, and I don’t care about this so-called issue at all.

What I do care about is how the president answered a question about HAMP, and I care because of the way he answered it.   I’ll get right to the point… here’s what he said…

Stewart: But don’t you have a HAMP program? Wasn’t there $50 billion set aside for HAMP and only five and a half billion dollars used.

Obama: Actually, what’s happened is we got 5 million homes where we’ve seen foreclosures prevented. We have a settlement with the banks that provides another $25 billion to help the housing market. But the central question is that there are a whole bunch of things we can do right now that will make the recovery even stronger…

Mr. President… may I have a word with you?

I’m really worried about you, sir.  What I mean is… you just answered that question about HAMP like some politician appearing on Fox News might have answered it, do you realize that, sir?

Jon Stewart asked you about why you didn’t spend so much of the money available for HAMP… on HAMP… or on other efforts to mitigate the damage being caused by the foreclosure crisis.  And you knew what he had asked, Mr. President, because your answer was like a text book example of obfuscation.

You also knew that the original budget for HAMP was not $50 billion, but $75 billion, right sir?  And that the real reason that you didn’t spend more than was spent is because you had no idea what to spend it on, isn’t that also right, Mr. President?

Because you tried to introduce a whole slew of programs over the last three years that would have resulted in the spending of some of that money, but every single one of those programs failed so spectacularly that you couldn’t even figure out how to spend any money on them, aren’t I also right about that, sir?

I know I’m right about all of this, Mr. President.  I was paying very close attention as the whole mess was unfolding, so I remember all of it, sir.  And I’m not the only one who does, Mr. President.  There are others that remember too.

Larry Summers says no one should ever admit they were wrong in politics, or in the White House.  I read about his views on this topic in Ron Suskind’s book, “Confidence Men.”

Larry Summers is wrong about that, Mr. President.

Mr. President, I won’t keep you any longer, sir, I’m sure you’re quite busy running for re-election these days.  But let me just tell you something that I think you need to hear… with your permission, of course, Mr. President.

I voted for you in 2008 precisely because, if nothing else, you were going to be the first politician THAT WASN’T GOING TO DO WHAT YOU DID THERE ON THE JON STEWART SHOW, SIR.  You were going to be able to communicate with the people, sir, just like you did during the 2008 campaign.  And the people would forgive you for “not knowing” or “making a mistake.”

The people would understand because you would tell us the truth.  You were gong to be “transparent,” don’t remember that, sir?  You must, sir.

For you to have answered the way you did while on Jon Stewart’s show, tells me that you’re not proud of how the foreclosure crisis was handled.  Because if you were proud, you would have had to obfuscate the way you did… it really was way beneath you, Mr. President.

And since you’re not proud of what’s gone on… why not fix it, sir?  Don’t listen to your advisors… you know what’s right and what’s wrong… the difference between the truth and something less… so, tell it.  Many of us already know anyway, but just set the whole thing straight and fix it going forward… and we’ll still cheer, sir.  It’s not too late, Mr. President.

If you don’t clear things up now, it’ll only get more difficult in the years to come.  Before you know it, it’ll be 20 years from now and you’ll be a guest on a talk show and your assistant will be telling that show’s producer to avoid questions about HAMP, because it’ll stay with you that long, sir.

And yet, that answer you gave on The Daily Show was very much that, sir, it was politics as usual.  And you have gotten very good at it, by the way, Mr. President.

But, you don’t need to be.  You can shake it off… come correct… change courses… act like the person you acted like during the campaign, sir?  LOL.  That was supposed to be funny, Mr. President.

Okay, well… never mind the jokes, sir.  I won’t take up any more of your time, Mr. President.  But I sure hope you give this some thought, sir.  You really didn’t need to do what you did when answering Jon Stewart… you could have just told the truth… it wouldn’t have cost you a single vote in November, in fact, it would more than likely have brought a few over into your camp.

Thanks for taking the time to hear what I had to say, sir.  Carry on… and good luck in November, Mr. President.  Please give my best to Michelle and the girls…

Whew… that was intense.  I was sweating like you wouldn’t believe.  How was I?  You don’t think I was too harsh or anything like that, do you?  I sure hope I wasn’t.  I didn’t mean to be.   Did you see him?  He was really paying attention there, right?

I just wanted him to know that we knew, and that it would be better not to hide things, but rather to get them out in the open and then fix them.

I thought it went pretty well, all things considered.  He seemed to take it well.

Whew… I’m sure glad that’s over though… I mean, he is the President of the United States.  Easy to get a little shook up talking to him for that long.

I think I need a drink.  He didn’t look upset, right.  Probably just in a hurry, right?  I hope so.

Did you think he’d be taller?

What was that?  Larry Summers on Line 2?