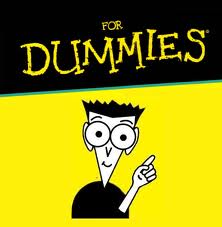 Apparently, the Government Accountability Office (“GAO”) has been studying the possible reasons why so few victims of foreclosure in 2009 and 2010 chose to submit their cases for review by the Office of the Comptroller of the Currency (“OCC”) as part of the regulator’s Independent Foreclosure Review process.

The GAO’s report, released earlier this month concluded that the OCC simply made submitting a complaint too difficult for us to understand.  We couldn’t figure it out.   It was over our collective heads.  And so, completely befuddled by the instructions, we didn’t participate in their Independent Foreclosure Review process. Don’t you hate it when that happens?

According to the Alan Zibel of the Wall Street Journal…

An outreach letter sent to consumers, a website and a form needed to request a review were “written above the average reading level of the U.S. population, indicating that they may be too complex to be widely understood,” the GAO found. Without those details, “borrowers may not be motivated to participate,” the report said.

Now, I know that I are just a dumb blogger, but it seemed to me that all of them homeowners that I talk on about the OCC’s Independent Foreclosure Review seemed to understand the letter they received, they all were able to find the Website, and I don’t recall hearing from anyone overcome by the complexity of the form itself.

So, I decided to make some calls to a few of my readers to see if I had missed something.  The first person I reached was Warren Peace of Paris, Texas.  And so I asked him…

“So, Warren… did you receive a letter some months ago from the OCC inviting you to submit your case to the agencies Independent Foreclosure Review process?”

“A letter… from the OCC… inviting you to submit the facts of your foreclosure to their review process?  Did you get one?”

“No, not Tuesday… earlier this year… or late last year… a letter would have come addressed to you telling you that you could submit the facts about your foreclosure to the OCC’s Independent Foreclosure Review… and that you could receive money if your facts dictated that you should.”

“Right, Warren… it would have come in your mail.  From the OCC… like something from a government agency.”

“No, not Tuesday Warren… it has nothing to do with Tuesday.  It would have come late last year.  About your house that was lost to foreclosure.  A letter.”

“Yes, Warren… I’m wondering about a letter you should have received in your mail.”

“I’ll go check my mail now.  If I see the letter from the CCCC, I’ll be in foreclosure.”

Well, on the other hand, maybe the GAO was right, I thought to myself.  But one call couldn’t be considered conclusive, so I dialed again.  This time it was Bonnie Ann Clyde, from Barrow Bay, Georgia who answered the phone.

“Bonnie, you are lucky… do you remember the OCC Independent Foreclosure Review process announced last year?”

“Shoot yeah.  ‘Course I do.  Who would forget that?  I read your testicles every day.”

“Um… you mean my articles.”

“No, I was just saying, you said… never mind.  So, do you remember the letter the OCC sent out to invite you to submit a complaint about your foreclosure for the review process?”

So, admittedly it wasn’t going well.  But I wasn’t about to give up… third time’s a charm, right?  So, I dialed once more… this time was destined to be better… how could it be worse?  And then the phone answered…

“Do you know when they’ll be home?”

“Are you home all alone?”

“And you’re home all by yourself?”

“How do you know what a child predator sounds like?”

“I watch Chris Hansen on Dateline.”

“Oh my God, and your parents let you watch that show?”

“Sure… all the time.  In fact, I’m recording you right now.  YOU’RE BUSTED DUDE.”

“Do you want to cuddle with me?”

Okay, so maybe this calling around idea wasn’t the best one I’ve ever had.

My point was that the OCC’s letter, Website, and form couldn’t have been so terribly complicated that it prevented people from submitting their complaints to the review process.  There had to be other factors that led to submissions being so low.

So, I found a copy of the OCC’s submission form.  Now we would see just how hard it was to deal with that darn form.  Okay, here we go…

1. Was this property your primary residence?     YES

2. Were you under bankruptcy protection or waiting for the final ruling on your bankruptcy case when the foreclosure action happened?

(Hmmm… maybe I’ll come back to that one.)

3. Do you believe that the mortgage balance amount at the time of the foreclosure action was more than the amount you actually owed on the mortgage?

HOW WOULD I KNOW?

4. Do you believe that the foreclosure action was pursued because your mortgage payments were inaccurately processed or applied?       POSSIBLY

5. Do you believe you were protected by an insurance policy issued by the servicer or affiliate that would have made your payment in the event of unemployment, disability, or illness, but did not do so?       ASK MY SERVICER

6. Did you attempt through the court to have the decision to foreclose on your home reversed?   SORT OF

7. Do you believe you provided all the necessary documents required to obtain payment assistance or a mortgage modification before the foreclosure action occurred?  NOT SURE

8. Was a deficiency judgment obtained against you for an amount that included money that you should not have been required to pay?  ASK MY SERVICER

9. Do you believe you were making on-time monthly payments in the required dollar amount on your mortgage or an approved loan modification, trial modification, or payment plan, yet the foreclosure action still occurred?

10. Do you believe that you were denied a modification when you qualified under the applicable program rules?   WASN’T TOLD HOW TO QUALIFY MYSELF

How am I doing so far?  Not so good, right?  Okay, so maybe this isn’t working out the way I’d thought it would.  It’s all just so confusing and above my reading level.  I think I better sign up for some reading lessons and revisit this whole thing in a few months after I get through the fifth grade.

Then last month… a new desperation… I mean, development…

So, last month, with response rates lower than most timeshare mailings, the OCC brought in the pros from Madison Ave. to help them “sell the product,” as it were, and next thing we all knew, the OCC’s Independent Foreclosure Review was transformed into an ad campaign indistinguishable from the campaign used by the state lottery.

I’m paraphrasing here, but if memory serves it was something to the effect of…

“Feeling defrauded?  Are you living in your parent’s basement at 52 years old? Robbed of everything in your life?  Considering a drug overdose for the holidays?  Well, if any of those thoughts have continued to cross your mind since 2009 or 2010, then you could be eligible to receive $125,000 from your bank!

That’s right… and don’t worry, because your bank will in turn be getting the money from American taxpayers just like you!  And all you have to do to win, is go online and fill out a form telling us just how badly your were defrauded back in 2009 or 2010 and we’ll take it from there.

And remember… you don’t need a lawyer.  So, whatever you do… don’t hire one.  In fact, don’t even talk to one about this even if you’re related to one.  Lawyers cannot help you in any way… so, why wait… apply today.

The jackpot is now $125,000 and you can’t win if you don’t play the Fraudclosuregate game!”

I can’t remember exactly, but there may also have been mention of some lovely parting gifts as well.  I think some contestants were going to receive Rice-a-Roni, The San Francisco Treat… along with Lee Press-On Nails… For those long luxurious nails that last and last.

So, getting back to the GAO study’s conclusions… the reason I don’t think it was the complicated nature of the letter, Website and form is that I think for $125,000, the remedial readers who were defrauded out of their homes would have turned to family members with more advanced reading comprehension skills for help.

So, if the homeowners we’re talking about here were in fact reading at such a rudimentary level that they were unable to understand the OCC’s letter, Website and form, it would seem to me that they could not possibly have understood the loan documents they signed that put them in this mess in the first place.  In which case, what we have here is an entirely new ball of predatory shithead, wouldn’t you say?

So, which is it?  Did they know what they were signing and therefore borrowed irresponsibly and deserved to lose their homes?  Or, were they unable to read at a level that would have allowed them to understand what it was they were signing?  Did they gamble and lose, or were they raped for fun and profit?

What shouldn’t be confusing in the least, however, is why so few homeowners chose to participate in the OCC’s Independent Foreclosure Review process.  That, my unenlightened friends at the GAO, is as they say… a no-brainer.

For the most part, homeowners chose to ignore the OCC’s so-called Independent Foreclosure Review because it was understood to be more of the same clandestine behavior from the most ineffective regulatory agency since the Klu Klux Klan was said to be protecting people.  What Moody’s was to ratings agencies, the OCC is to bank regulators.

Lucky for me, I covered the OCC’s announcement of its Independent Foreclosure Reviews at the time.  The title of my May 21, 2011 article was, and with good reason, “When Auditing Foreclosures, the OCC’s Definition of the Word “Thorough” is Apparently… “Hidden.”

Let me refresh your memory as to why I said what I did, in outline form…

Sorry, stuff like that makes me crazed.  How can they fail to finish a sent…

Well, that may be true, David, but that’s only because you’re a lazy and dishonest underachiever who hasn’t read a book since law school, right?

So, GAO people… does that help clear things up for you at all as to why the level of participation in the OCC’s quasi-independent and entirely secretive foreclosure review might have been a tad on the low side of expectations.  Actually, that the OCC or anyone else in government actually thought that anyone at all would participate is a testament to just how out of touch you all are with your constituents.

I mean, at least you managed to get just under 200,000 to close their eyes and say, “There’s no place like home.” You should be happy that you didn’t end up with 20,000 or even 2,000.  I know, there were supposedly 4.5 million that were eligible, but I think the ratio is correct if you compare those that were supposed to be helped by HAMP with those that actually were.

And by the way… am I getting my message across here?  Please let me know because if my writing is taxing your reading abilities, I’m sure I can find a homeowner to help me dumb it down to your level.

P.S. And lest you think me entirely unsupportive, you should also know that I also wrote helpful things about the OCC’s promised process, as in “OCC’s Independent Foreclosure Review is Ready for Homeowners.”  You see, I try to help… it’s just that you make it so damn hard.