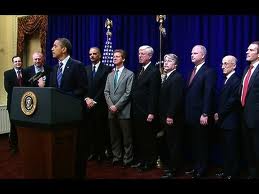 It happened last February 9th.┬Ā President Obama announced what would become soon after become known as the National Mortgage Settlement.┬Ā It was the end of more than a year of negotiations between 50 state attorneys general and the five largest mortgage servicers, Bank of America, JPMorgan Chase, Wells Fargo. GMAC and Citibank.

It was the first time we had heard from the president on the housing and foreclosure crisis since February 18, 2009, when he introduced his Making Home Affordable plan to the wildly cheering crowds in Arizona… three years before.

And, if you haven’t seen that now infamous speech, or haven’t seen it lately, then have to say that I cannot recommend it highly enough, and you can watch it on Mandelman Matters right here: A Walk Down Memory Lane with President Obama & the Mortgage Crisis.┬Ā You’ll find it divided into two parts, both are worth watching for all sorts of reasons.

But, I’m now posting the speech from last February, at which the president announced the conclusion of the AG investigations/negotiations because I think it was his best speech ever in many ways.┬Ā It’s the only speech he’s ever given during which I actually cheered.┬Ā Once I even said aloud to absolutely no one…

“YES!┬Ā Oh my God, did he just say what I thought he said?”

So, go ahead… click play and watch it.┬Ā It’s only about 8 minutes long and for some strange reason it may give you some hope.┬Ā I say that because Attorney General Kamala Harris actually got the California Homeowners Bill of Rights passed by our state legislature, and I would have bet against that happening just a month or two ago.┬Ā I was wrong, and it taught me never to give up on anything no matter how improbable it may appear.

I’ve always said that we will win this in the end because we are right.┬Ā And right always wins out over wrong in this country.┬Ā Maybe not when we want it to, but that’s no reason to give up on winning, in fact it’s reason to double down and try even harder to make sure that America ‘s 99 percent ends up on top, and that we once again become a nation of which we are all very proud.

I don’t believe the president is lying when he gives the speech on the video below.┬Ā I think he means what he says, but can’t seem to do much more to ensure the vision he talks about is realized.┬Ā Neither will Romney, however, should he be elected… and in fact, no one will until it is politically possible to do what is needed, and that means WE need to keep the voice of America’s homeowners going and growing stronger every day.

Happy 4th of July Everyone!