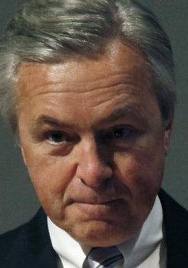 Did you see what happened yesterday? ┬ĀIt’s hysterical, really. ┬ĀI mean, not for Aaron Krowne at ML-Implode, or Michael Nazarinia at Rest Report Matters… you see, Wells Fargo was shooting at me… but shot them.

(And today, Wells is still at it… someone else at Rest Report Matters had his account closed… and then his mother’s account was also closed. ┬ĀLOL… his mother’s?)

And it made quite the impression on a number of heavyweight bloggers, like Yves Smith of Naked Capitalism, and Barry Ritholtz, of The Big Picture, and you’ll see part of what they had to say below, with links to the rest of their story, of course. ┬ĀAnd I’m sure there will be more where they came from, if there aren’t already.

So, when Aaron Krowne called me from Wells Fargo Bank today to tell me that Wells Fargo had frozen his checking account because of the articles I’d written, all I could think of to say was…

“You bank at Wells Fargo? ┬ĀWhy?”

It’s true… Wells Fargo Bank got SO mad at me for writing all of those ABSOLUTELY TRUE things about them, that they decided to get me good… and in their typical burst of competence and caring, they went out and…

CLOSED THE WRONG ACCOUNTS, YOU IDIOTS.

Were you guys at Wells who went after me by closing my accounts all pleased with yourselves today? ┬ĀDid you think you ruined my day… you’ll show me, is that what you were thinking?

Aaron Krowne runs ML-Implde.com… not me, and I have no financial interest in his site. ┬ĀAnd I don’t have any financial interest in Rest Report Matters either. ┬ĀYou guys took a shot and hit absolutely nothing having anything to do with me… I barely looked up from my desk all day. ┬ĀYawn.

For the rest of the story, read on below, but I have a message for Wells’ CEO John Stumpf, if you’d care to read it…

You’re being a real jackass, do you know that? ┬ĀDo you even know what you’ve done? ┬ĀWhat you’ve accomplished?

Well, for one thing, you’ve managed to wake up the biggest bloggers in the country to realizing what you and your bank are really like to people. ┬Ā I can’t thank you enough for that, by the way. ┬ĀI couldn’t┬Āhave done it without you. ┬ĀThey’re not losing their homes so it was hard to explain Wells’ propensity for pettiness… or willingness to treat homeowners unfairly, but you stepped in with both feet, and now everyone knows.

For another thing, you let me know just how much my articles bother you. ┬ĀAs in, hmmm… I think I’ll write 10,000 more. ┬ĀIt’s kind of an honor, actually. ┬ĀI mean, you’ve taken more action against me and my articles then anyone in the whole country. ┬ĀWow… there’s Occupy… some guy who sent your bank white powder… countless demonstrations… hate-Wells blogs… but it’s little old me that’s gotten under your skin? ┬ĀGosh, thanks.

And thirdly, you wasted time and probably cost your company several thousand retail accounts before this is all over. ┬ĀA good friend of mine happens to run that “Move Your Money” site? ┬ĀSo, who knows…

And last but not least… and I’m going to assume for a moment that you’re more than a pretty face, you really should read more of my blog, because if you did you’d discover that I am not some flame throwing nutcase. ┬ĀI write articles that either help to educate, entertain… or allow people vent, but I’m actually the voice of reason.

It takes a reader of some sophistication to see what I do, but in many instances I’m actually helping a bank by providing an early warning system and a way for homeowners to “occupy” without leaving their homes.

And if you didn’t want me to be writing about you, you could have just picked up the phone and we could have talked. ┬ĀOr, if not you, maybe you could assign someone who could show me what’s going on at Wells so I could advise homeowners as to what they can expect.

Bank of America called. ┬ĀOcwen did too. ┬ĀEven One West”s CEO reached out to me and assigned someone so I could bring problems to her instead of writing about them. ┬ĀOneWest saved two homes almost right away. ┬ĀI’ve seen BOA and Ocwen save dozens and dozens.

In fact, I’ve come to like BOA and Ocwen a great deal. ┬ĀThey’re both trying really hard… they both admit it when it’s their fault, and they correct mistakes immediately. ┬ĀThe people at both servicers care about homeowners, regardless of what others may think.

But your bank, Mr. Stumpf… Wells, Wells, Wells… everyone is saying you’re the worst out there… the most difficult to deal with… inflexible and less than honest… people are hating you all over the county.

And I can’t take credit for all that, can I? ┬ĀNo, I think that’s your performance record on display.

… the actions are shocking due to their intrinsic lack of due process and harshness ŌĆö no advance notice was given and no real reason was given for the action (as ŌĆ£credit riskŌĆØ does not actually apply to the type of account in question).

It is believed that the actions were taken in retaliation for a recent series of articles by ML-Implode blogger Martin Andelman which pulled no punches in criticizing Wells Fargo over its foreclosure practices ŌĆö in particular the tragic and┬Āhorrific case of Norm Rousseau┬Āwho was driven to suicide after Wells Fargo lost a mortgage payment and mistakenly foreclosed on the familyŌĆÖs home, despite a lengthy back-and-forth process which gave the bank ample opportunity to correct the mistake.

(Other recent articles by Andelman taking Wells to task that may have angered the bank include┬Āthis one┬Āand┬Āthis one.)

Andelman is not paid by ML-Implode and blogs wholly independently (as many others have done on in the past); ML-Implode does not dictate or control what he writes. As such, if WellsŌĆÖ actions are truly in retaliation for the articles,┬Āthey are apparently violating federal law:┬ĀUSC 47 USC ┬¦ 230 forbids┬Āholding an internet ŌĆ£common carrierŌĆØ (such as an ISP, forum, or any sort of hosting outfit) liable for the content users independently post or transmit.

The prior week, ML-Implode affiliate REST Report Matters (http://www.restreportmatters.com/), inspired and promoted by Andelman to give homeowners at risk of foreclosure access to the same loan analysis tools the banks have, also had its account shuttered by Wells Fargo. It appears the bank first followed AndelmanŌĆÖs references to REST Report Matters, targetted that company, then connected REST Report Matters back to ML-ImplodeŌĆÖs business account (via affiliate transactions) and marked that account for ŌĆ£summary executionŌĆØ as well.

Martin Andelman has no ongoing financial relationship with REST Report Matters, which means WellsŌĆÖ shuttering of their accounts amounts to tortious interference with a legitimate, independent business.

┬ĀRead more on The Big Picture

It appears Wells Fargo is not happy about bad press about how it has blood on its hands and is not above taking petty revenge. Even though some major sites like┬ĀBarry RitholtzŌĆÖs The Big Picture┬Āhave publicized the San Francisco bankŌĆÖs petty and possibly illegal treatment of mortgage blog ML Implode-o-Meter, casual readers may miss the real scandal. Wells closed the blogŌĆÖs bank account on dubious grounds and with no notice, and appears to have impounded customer funds. ThatŌĆÖs tacky, but the real meat of the story, the revelations in ML Implode-o-Meter that appear to have triggered Wells to act, comes fairly late in most of these accounts.

Martin Andelman, proprietor of Mandelman Matters who sometimes has his posts picked up by ML Implode-O-Meter published a hard-hitting story about a suicide that was precipitated by an improper foreclosure action by Wells Fargo. It was picked up by ML Implode-o-Meter and was re-reported by Truthout (with attribution). The short version of this story is that Norman Rousseau paid his mortgage by cashierŌĆÖs check at the branch, on time. But Wells claimed the payment had not been made and moved to foreclosure. Andelman dismissed the bankŌĆÖs bogus justification:

The tellerŌĆÖs receipt establishes that the cashierŌĆÖs check was in the custody and control of Wachovia on April 1, 2009, and the research by the Cashiering Department should have concluded that Wachovia screwed up by not applying the cash-equivalent funds to the RousseauŌĆÖs account. After delivery and acceptance to the branch office, it was WachoviaŌĆÖs responsibility to safeguard the instrument; Wachovia itself effectively stopped payment on the cashierŌĆÖs check.

The fact that the Rousseaus had a receipt should settle the matter. The payment was submitted on time. Nevertheless, they enter loan modification hell, rather than simply having the error corrected. And although all modification stories are awful, this one was worse than usual even before its awful denouement.