Home  »  In the Words of Goldman Sachs CEO, Lord Blankcheck…

In the Words of Goldman Sachs CEO, Lord Blankcheck… 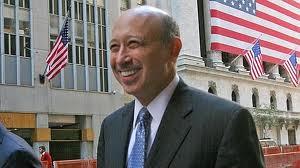 The lyrics just below are to be sung to “On the Street Where You Live,” from the musical, “My Fair Lady,” which starred Rex Harrison and Audry Hepburn playing the role of Eliza Doolittle.  However, if you aren’t familiar with the song, click PLAY below and hear Lord Blankcheck himself (played by yours truly) perform the song himself.  LOL.  After that scroll down for lots more from the mind of Goldman’s CEO.

I have often walked down Wall Street before.

But our billions are discreetly kept in banks off-shore.

We’re so big that you just must forgive.

Global expertise, known all over town

And although there have been some who’ve tried to take us down.

To Senate’s and House Floor

Means that all you can do is forgive.

And when investors are squealing,

But when the markets need healing,

We show up and everyone begins to cheer.

God’s work is what we do, though you may disagree.

But all you can do forgive.

So, have you ever wondered what Goldman Sachs CEO is saying when the cameras aren’t on, own what goes on under that highly polished dome of his?  Well, I sure have. 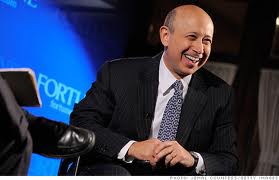 “Well, at the time it caused me to cut a vacation short by a few days, which I wasn’t happy about, but sure looking back it is kind of funny to think about all the times we almost caused the total collapse of the global financial markets… I mean, I think the official count is 16… but unofficially it’s probably closer to 30… LOL.  Maybe we should change the subject… you weren’t recording that part were you?” 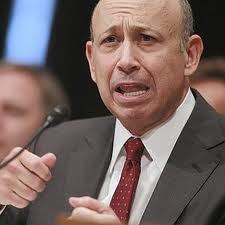 You fools!  You fell victim to one of the classic blunders – The most famous of which is “never get involved in a bail out in Asia” – but only slightly less well-known is this: “Never go against Goldman Sachs when the global banking is on the line”! 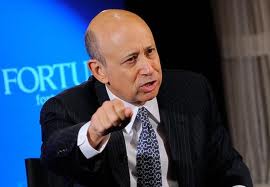 “Well, the details are proprietary, of course, but in general at Goldman Sachs our core strategy has always been to take a client with over $500 billion to invest, such as a sovereign nation or pension plan, and after we’ve got them in the right position of course, we look for opportunities to jam what we call our ‘strategy’ into their daily operations, and then twist hard until our objectives are fulfilled.” 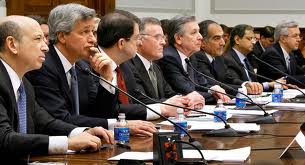 “No, you can’t cheat of of my notes again, Dimon.  Take your own damn notes.”

It’s bad enough that I’m the only bald guy here, but who the f#@k seated me next to the goyim who works out 7 days a week, runs around looking like he bought out the Hair Club for Men, and never took an accounting class in his life. 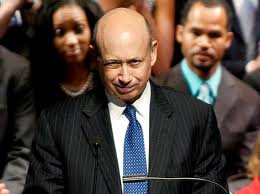 “Limits on CEO pay… again?  I thought I was clear last time this came up and the answer was NO.  When I get back to my office I think I’ll bankrupt Australia, New Zealand and maybe a South American country too.  That’ll give these fools in Congress something to do.

And what’s with the two African Americans following me?  It can’t be money for a donation.

I already gave half a mil to the ASPCA this year, signed the check myself.” 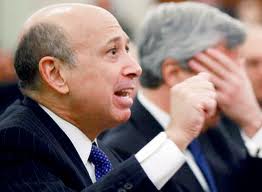 “It’s not funny anymore!  No, I did not order the Kosher plate, I NEVER order the Kosher plate… I’m not an Orthodox Jew… I ordered a Reuben with mustard and a pickle and a Dr. Browns Diet Black Cherry.  Look what I got… three pieces of dry motza, a boiled potato… and what’s this?  Yeah, I thought so… Beet Borsht with Sour Cream… I HATE BEETS DAMN IT.

Okay fine… you want to be funny… well, guess what… I’m all of your counter parties, so don’t be surprised if on Monday morning you find collateral calls for a few billion sitting on your desks when you walk in … let’s see who’s laughing then.  You’ll know they’re GS because I’ll make sure the envelopes say Shalom on the outside.” 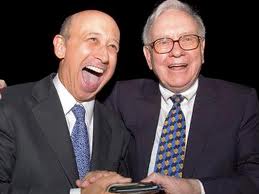 “Actually, Warren… I would have told you, but you didn’t ask the right question at the right time.  It’s kind of funny, if you look at it the right way.  It was us that started shorting Berkshire Hathaway right after we heard you make that crazy statement about how housing was going to recover by last year.  Still friends though… right?” 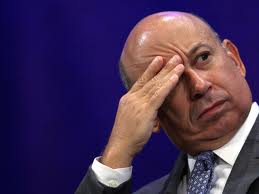 “What the f#@k is a ‘vampire squid’ anyway?  Why would he call us that?  And what kind of name is ‘Taibbi?’  It sound Arab.  Is that little jerk-off a Palestinian or something.  Arrange to have the head of his father’s camel cut off and dumped in his bed.  That should shut him up.

Either that, or have Rupert Murdoch buy out that Rolling Stoned rag…whatever it’s called, plant some coke in his desk and fire him right before the Press Release about his drug habit and refusal to accept the magazine’s offer to pay for a few months at Betty Ford goes out.” 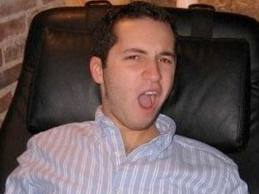 “Dad… thanks!  Thanks for covering for me.  You are the best.  And don’t worry, I’ll be more careful from now on.  I mean, when the guy said he’d be transferring millions of ‘Rupees’ how was I supposed to know he was talking about his country’s currency.  I thought he was talking about those red gemstones Mom wears around the holidays, so I told him to just keep them.  Totally, my bad…” 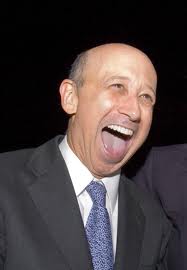 “I’d always suspected it, but never knew for sure… but fine… I have to admit it… this whole too big to fail thing is pretty darn cool.  We should have done 2008 thing back in ’94 and I might still have some of my hair.  Oh well, live and learn.” 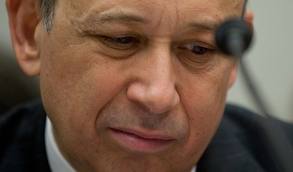 “They fined us half a billion… for what?  For withholding information from investors and coming out on top of a securities deal?  Since when is that even frowned upon, let alone illegal?  That’s been SOP since we let the federal government start calling our central bank, ‘Federal’ back in 1913.

Tell Obama this better be it.  Tell him , one more dime and we’ll raise his rates and stop lending him the money he needs to pay us the payments the government owes us.” 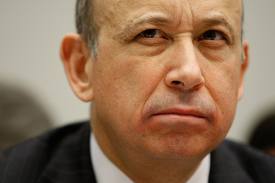 “Whatchu’ talkin’ about, Holder?  Try it and you’ll end up working as a HUD counselor trying to stop foreclosure sale dates on the South Side of Chicago where there are actual black people who might not find the fact that you thought Jesse Jackson was a running back for the Bears… funny in the least.” 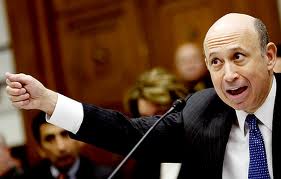 Okay, let’s try the new system.  When I point over there… you start asking whoever I’m pointing at the questions and get off my ass, okay.  Think you can remember that Senator?  Okay, here goes…” 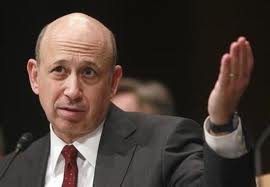 Come on… AIG again?  It’s water under the bridge… give it a rest already.  So, big deal… the federal government already owns a couple of bankrupt mortgage companies anyway… so what’s the big deal about owning an insolvent insurance company too?” 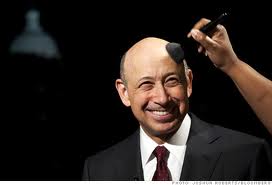 “Nothing too dark, but I don’t want you to leave me looking like a 40 Watt wearing Mickey ears either… so better go ahead and put on two coats this time.  I’ve been swimming and don’t want to get caught on camera without my high-pro glow.”