Home  »  Elizabeth Warren Asks Netroots Nation a Question. Problem is, I think the answer is NO.

Elizabeth Warren Asks Netroots Nation a Question. Problem is, I think the answer is NO. 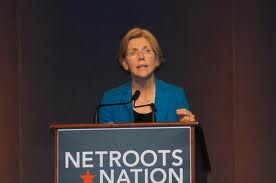 So, I guess a couple of weeks ago, Elizabeth Warren was a speaker at Netroots Nation, which I believe someone said was held in Rhode Island this year.Â  I don’t really know what Netroots Nation is, but it’s obviously some sort of big deal convention for… bloggers?Â  I’m not really sure, but I think that’s part of it.Â  Here’s what they say about themselves on their Website:

“We amplify progressive voices by providing an online and in-person campus for exchanging ideas and learning how to be more effective in using technology to influence the public debate. Through our annual convention and other events, we strengthen the community, inspire action and serve as an incubator for ideas that challenge the status quo and ultimately affect change in the public sphere.”

Wow, that certainly sound like something I’d be interested in… strengtheningÂ  community, inspiring action, serving as an incubator for ideas that challenge the status quo.Â  Actually, maybe not the incubator part, that just sounds icky, but the rest is me all the way.Â  I found out about it on Truth-out.org, which looks like another one if these too-well-funded Pro Publica sort of things, not that I’m opposed to those sorts of things.Â  Someone’s gotta’ be well-funded, so it might as well be them.

Well, good news… next June their holding the event in San Jose, California, which is a location I could drive to… assuming I could spend the $500 – $800 it costs to attend.Â  Actually, if I sign up today it could only cost $200 as they have a limited number of reservations available at that low price.Â  As time goes by the price goes up, is how they explain it.

This year in Rhode Island and next year in San Jose… what’s wrong with being centrally located and holding the convention near airports that it doesn’t take three connecting flights before you land at them.Â  And since when do bloggers have $500 to $800 to go to a trade show?

I’m blown away that my peers are doing so well financially speaking.Â  I have one heck of a time just getting myself 400 miles north to Sacramento… and the others are hopping on planes and spending the week in Rhode Island listening to Elizabeth Warren speak?

Oh well… I guess we’ll just have to see how next year goes… and if I can make it to San Jose, I’ll certainly try to attend.Â  It’s probably not all that important one way or the other, it seems like these guys have it all together.Â  Although I am wondering if one of the classes they’ll be offering is on how to make enough money to attend Netroots Nation each year.

I wonder where it will be held in 2014?Â  Juno?Â  Great… I’ll check CheapTickets.com to see what kind of deal I can get booking a sea plane.

We Love You, Liz…

Liz Warren’s speech was short and to the same point we’ve all heard her speak to before… we need to push back on behalf of middle class in this country.Â  And look, it’s no secret that I absolutely adore this woman for everything she has said and done… I actually met her and spoke with her last year, you might recall, when former Ohio AG, Marc Dann introduced me to her when she was speaking in San Diego.Â  She’s the one who confirmed my thinking about this having to be fought at the state level.

But, she’s losing this fight, right?Â  What Obama did to her was shameful and a major let down for many in this country, although she still supports this president and I suppose has to if she’s going to have any shot at all of winning a Democratic seat in the U.S. Senate.Â  And even if by some miracle she does win, can it possibly matter?Â  This is the United States Senate we’re talking about here… the place where change goes to die.

I could tell from her speech that she knows what I’m saying is true… her voice sounds like mine does most of the time.Â  She’s tired and knows she is not going to be able to do it alone. She’s asking the audience for DOERS, because that’s what she needs, that’s what I need… that’s what we all need.

But, we just don’t have enough DOERS in this country as yet.Â  The pain simply isn’t great enough.Â  Heck, it’s next to impossible to get most people just to click the “Like” button on Facebook.

“Gee, I don’t know, I mean, I did enjoy it and all, but I’m really not entirely sure that it warrants a full ‘Like.’ And it certainly falls short of being a ‘Share,’ or a ‘Tweet.'”Â  People will tweet when they get their car washed, but Re-Tweet an important article about the foreclosure crisis?Â  “No, I’m sorry, no… I just couldn’t click one more time today. I’m all clicked out.Â  Maybe next time… it’ll give you something to try for…”

I learned the answer to all this a few weeks ago… all you have to do is promote a suicide, as I did with Norm Rousseau.Â  That story got picked up, or more often stolen by everyone in the country, it seemed to me.Â  And even with all the stealing… mine still managed to get 3700 Likes, 260 Shares and 443 Tweets.

That’s the most I’ve ever gotten by far.Â  I think my second place article got a few more than 500 Likes, and third place would take that number down to a little over 200 Likes.Â  It always amazes me, but I’ve actually written fairly brilliant and important pieces only to find out that even though 1846 people read it… including friends of mine… and only three even bothered to “Like” it.Â  Too much effort required, I suppose.

Of course, that’s not why I wrote about Norm Rousseau’s suicide.Â  I stayed up all night that Sunday night to write that piece because I wanted Wells Fargo to stop the eviction plans that were in place for Tuesday morning at dawn.Â  Wells Fargo did postpone the eviction for two weeks, so all-in-all it worked and that should be enough for me, right?Â  Yeah, I suppose that is right.Â  But still… it does teach one an invaluable lesson about people, does it not?

Wait until everyone sees my new site, www.thepeoplearedying.com.Â  It’s just jammed packed with suicides and other tragedies related to the foreclosure crisis.Â  In fact, the tag-line I’ve been playing around with is, “All Suicides, All the Time.”

I’ve even asked my closest friends, “Did you see my latest post,” and they say yes, they have.Â  And I’m like, so… would it kill you to click the Like button once in a while?Â  Maybe a Share here and there?Â  Come on, we’ve known each other for 26 years and you couldn’t be bothered to click after reading my 4,000 word article on the economy that caused you to laugh several times.Â  Not quite ready to Like it, yet… you stingy bastards?Â  You’d think it cost them a hundred bucks to click the Like symbol.

By the way, did you notice, the follow-up piece to the one about Norm’s death, which I thought was much better writing, more interesting and definitely made a much more important point about Wells Fargo’s perspective… it received 18 Likes, 11 Shares and 10 Tweets.Â  Woohoo!

Maybe I should put a dislike button on my blog, and that way Wells Fargo’s people could click it a few thousand times every time I write about them.

But I want something more than winning an election. I want to change the national conversation. I want real change. It’s up to us to put the wind in our own sails. With your support, I know we can do this. Are you ready to do this? Are you ready?

Because we need to do this. Thank you.”

I hear what she’s saying about needing everyone’s support, and how she’s counting on it, but I’d bet money that half the people in that audience that live in Massachusetts probably won’t even vote because of something important like a basketball game come up on television, or because it was raining.

Don’t get me wrong, I’m not giving up, and I do really appreciate all the support I do receive… in truth, I have some readers that are just off-the-charts smart and always ready to get involved in the discussion or debate.Â  In fact, my DOERS have proven themselves so powerful and effective that I finally believe that I will one day make a significant positive contribution to turning things around.

But, we need more to do more… and it must just be that people are too busy to focus… and they just leave things alone and go back to their lives.Â  In a few weeks I’ll be rolling out a new blog design, and maybe that will help because people will actually be able to find stuff.

The point I’m making, however, isn’t really about me… it’s about Liz Warren.Â  She got her butt kicked in Washington the last time around, and I think the bottom-line is that when she asks the question, “Are you ready to do this? Are you ready?”Â  The brutally honest answer is probably something like…

“Well, no actually… not quite yet.Â  Would you mind terribly, be a dear and check back in a year or two?”

Which is why things aren’t changing as many of us would like them too.Â  Last week I was asking myself why the Obama Campaign wasn’t more scared of the foreclosure crisis and how those who have lost homes might impact his chances in key states like Florida and Ohio.

And I realized the answer was that he’s not more scared…Â  because we’re not all that scary.Â  We may complain like the dickens, but at the end of the day, we’re going to turn out at the polls knowing basically what we always know before we vote… whatever we heard on T.V. or more directly put, essentially nothing.

The real point here is that we don’t deserve someone like Elizabeth Warren and likely won’t get her or anyone like her until we can answer her question about being ready with a resounding YES! and really mean it, as in be willing to miss our favorite television show or work the weekend as a volunteer.

Until then… they’re not scared because we’re not scary… we may be attending Netroots Nation, but that’s more because we’re hoping to cut a get-rich-quick deal with AOL like HuffPo did… not because we’re ready to spend our own money to travel somewhere in order to go door-to-door in the rain for a candidate running for office.

Check out Liz’s speech below, it’s only like five minutes long… Oh, I know… you’re running out the door… you have a lunch date… a doctor’s appointment… a birthday present to buy… work to get to… friends came in from out of town…

Okay already, I get it… never mind.