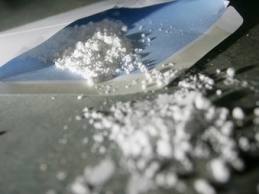 Well, here we go.¬Ý In our race to the bottom‚Ä¶ our attempt to see how far we can push it before we break something‚Ä¶ our desire to see chaos American style‚Ä¶ ABC News reported yesterday that at least seven locations in Manhattan, ‚Äúprimarily Wells Fargo Banks,‚Äù according to the story, received envelopes in the mail containing¬Ý ‚Äúsuspicious white powder,‚Äù police officials said.

Well, thank heaven it wasn‚Äôt the non-suspicious form of white powder‚Ä¶ you know, the kind we‚Äôre all used to getting in our mail every day.

The message that arrived in the envelopes read as follows:

‚ÄúThis is a reminder that you are not in control.¬Ý Just in case you needed a little incentive to stop working we have a little surprise for you.¬Ý Think fast you have seconds.‚Äù

AP reported that the powder in the envelopes caused evacuations at bank branches, but no injuries, as if that last part mattered in the least.¬Ý Idiots appear to be happy that the powder was found to be cornstarch‚Ä¶ as opposed to Anthrax, I suppose.

Gee, now that‚Äôs certainly a relief.¬Ý Whew, I guess we dodged a bullet there, didn‚Äôt we? 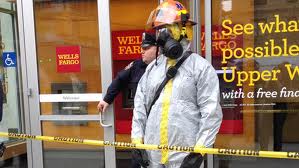 Manhattan police, about ready to round up the usual suspects and get a rope, initially suggested based on absolutely nothing that the envelopes could have been mailed by ‚Äúmilitants from within the Occupy Wall Street movement.‚Äù

Luckily, a spokesperson for Occupy Wall Street denied any connection to the mailings‚Ä¶ and that seemed to accomplish what exactly?¬Ý I guess the NYPD said, ‚ÄúOh, okay‚Ä¶ sorry about accusing you guys of potentially mailing Anthrax to banks in Manhattan?¬Ý Our bad.‚Äù

The police say they thought that Wells Fargo was the target of the mailings because it‚Äôs based in San Francisco, and what they described as ‚Äúabout half of a key dozen Occupy Wall Street members have backgrounds in Oakland, San Francisco and Berkeley‚Ä¶ and SIMILAR INCIDENTS OCCURRED IN CALIFORNIA EARLIER THIS WEEK, police sources said.‚Äù

‚ÄúA key dozen Occupy Wall Street members?‚Äù¬Ý So, now there are probably a few hundred who are convinced that phrase was referring to them‚Ä¶ perfect.¬Ý And what exactly was similar about the incidents that occurred in California that no one seems to have heard anything about until now?¬Ý Was it the cornstarch‚Ä¶ the mailings‚Ä¶ the scary message inside?¬Ý How similar were these events exactly and why were they mentioned before now?

Another theory I just made up is that Wells Fargo was targeted because it‚Äôs stage coach logo is reminiscent of the old West, when Native Americans were the victims of genocide, so the FBI is said to be investigating Indian casinos in several states.

What?¬Ý My theory makes every bit as much sense as theirs does.

Others on the list of potential suspects include any number of the 8 million Americans whose lives have been destroyed by the foreclosure crisis, or any of the hundred million or so that are beyond pissed over bailing out banks with trillions while leaving the country‚Äôs working class to die on the proverbial vine.

Or the commies, it could always be the commies.¬Ý And let‚Äôs not forget the Jews, al-Qaeda, ex-military wackos, or a prankish band of Ivy League college students, saddled by student loans and out to have some fun.¬Ý Or foreigners, don‚Äôt forget foreigners.

In other words, police had no idea whatsoever who sent the mailings.

‚ÄúApparently, the message was aimed at the mail room workers among the 99 percent.‚Äù

The police are saying that the mailings were intended for May Day delivery, but arrived a day early.¬Ý One official, according to ABC News, inexplicably said‚Ä¶

Ha!¬Ý So, the joke’s really on them after all, right?¬Ý Didn‚Äôt think the USPS could foil your plans with their efficient inner city delivery, now did you?¬Ý Ha!¬Ý So there. 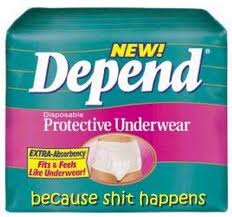 I‚Äôm reporting, however, that regardless of who the mailings appear to have reached, senior executive seat cushions at Wells Fargo and other banks are all being replaced today after being soiled as the news of the mailings and their enclosed powdery substance spread through the executive ranks.

I‚Äôm also reporting that I have instructed my wife and daughter not to go inside the bank for any reason, and instead only use the ATM after hours.¬Ý And I‚Äôm not kidding about that in the least.

No one should be the least bit surprised that this is happening, and it‚Äôs nothing to take lightly or brush off as nothing to be worried about‚Ä¶ it‚Äôs scary as all hell because it‚Äôs a certainty, in my opinion, that it‚Äôs only a matter of time before people are killed in one way or the other as a result of what this country has allowed to happen to untold millions.

‚ÄúThis is a reminder that you are not in control.¬Ý Just in case you needed a little incentive to stop working we have a little surprise for you.¬Ý Think fast you have seconds.‚Äù

There‚Äôs a word for that sort of message, it‚Äôs ‚Äúterrorism.‚Äù¬Ý And it can strike without warning and claim the lives of thousands‚Ä¶ and there‚Äôs no way to stop it, and no one who cares about being punished for it after the fact.

The Oklahoma City bombing, April 19, 1995, claimed 168 lives, including 19 children under the age of 6 years old.¬Ý More than 680 were injured.¬Ý The bomb destroyed or damaged 324 buildings in a 16-block radius, destroyed or burned 86 cars, and shattered glass in 258 buildings nearby. 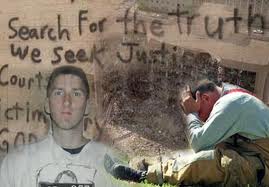 Timothy McVeigh believed that the bombing had a positive impact on government policy.¬Ý And what angered him then is nothing compared to the potential for rage that exists today.

During the 1930s, after the attack and attempted lynching of a judge (who was signing eviction orders) by 200 Iowa farmers who stormed into Judge Bradley‚Äôs courtroom in April 1933, the Governor of Iowa placed the state under martial law.

In Minnesota, similar degrees of civil unrest and the threat of violence led Chief Justice Hughes to declare a moratorium on foreclosures.

Expressing frank understanding that the nation‚Äôs economic catastrophe threatened political stability, Hughes remarked, ‚Äúthe policy of protecting contracts against impairment presupposes the maintenance of a government by virtue of which contractual relations are worthwhile.‚Äù¬Ý

Hughes found that the mortgage crisis in Minnesota justified the stay of ‚Äúimmediate and literal enforcement of contractual obligations‚Äù insofar as the emergency was real and no mere legislative subterfuge; the statute was designed for the benefit of society as a whole rather than particular individuals; and the legislation was temporary and no broader than necessary to accomplish its purpose.¬Ý Hughes also denied that the statute violated due process or equal protection.

A foreclosure moratorium is not what we need‚Ä¶ it is a last resort.

What we need is a fairer and more compassionate process through which we can get through the foreclosure crisis.¬Ý The way in which foreclosures have been handled to-date has been wrong to the point of being barbaric, and we will continue to deny and ignore this truth at our peril.