NACA stands for the Neighborhood Assistance Corporation of America; a nonprofit that provides ‚ÄúHome Save Counselors‚ÄĚ to assist homeowners trying to get their mortgages modified.¬† They put on really big shows at convention centers and have lines of homeowners waiting overnight‚Ä¶ that sort of thing.

I‚Äôm not sure why, but meeting with a ‚ÄúHome Save Counselor‚ÄĚ doesn‚Äôt make me feel like I‚Äôll be talking with a commissioned salesperson who will be potentially making up to $1,000 on my loan modification case?¬† A ‚ÄúHome Save Counselor‚ÄĚ is on commission?¬† What‚Äôs next?¬† Does the nurse in the Emergency Room get a bonus if I get an MRI?

Well, according to a reader of mine who wrote to tell me that he or she had been working at NACA and, among other things he or she found objectionable, was the compensation structure‚Ä¶ or, the commission plan would be a better way to phrase that.

Here‚Äôs what my reader, who shall remain anonymous, had to say after working as a NACA ‚ÄúHome Save Counselor‚ÄĚ for almost a year‚Ä¶

The pay structure at NACA is unbelievable. ¬†They start you off at $12.00 and hour until you finish your training. ¬†You‚Äôre told that within four months you should have built your pipeline.¬† Most of that pipeline consists of files transferred from those who have left the company‚Äôs employ. ¬†

After training ends, your hourly pay drops to $8.00 an hour and becomes a draw against future commissions, the thinking being that by this time you should be closing loans – YEAH RIGHT. ¬†The commissions could be anywhere from $750 to $1,000 – depending on the target (credit).

The turnover rate is very high.¬† And they don‚Äôt appear to care who leaves or stays – they profit either way.¬† You can‚Äôt imagine how many mortgage consultants leave the company and never get that 80%. ¬† ¬†

And you have to re-pay what they call, “The Draw.” ¬†There are countless employees that owe NACA thousands of dollars, and are constantly fighting to receive their commissions.

Now, to begin with, I checked the NACA website and found they recruit for open positions right there.¬† Here‚Äôs what it lists as desired experience, just in case you‚Äôre interested in becoming a NACA ‚ÄúHome Save Counselor.‚ÄĚ

Well, I was glad to see that they, at least, did include ‚Äúcounseling‚ÄĚ on the list.¬† But, I can‚Äôt help but wonder how many people out there have a resume that looks like this:

I only ask because I‚Äôve known quite a few people in my 50 years on this planet, and I‚Äôve personally never even heard of a‚Ä¶ ‚ÄúComputer literate involved community counseling mortgage broker with telemarketing and loan originating experience in the financial services industry,‚ÄĚ have you?

Do they even make those?

Come on‚Ä¶ I was born at night, but not last night.¬† Once you put ‚Äúmortgage broker‚ÄĚ on that list, you‚Äôre looking for a mortgage broker, right?¬† You know any mortgage brokers with diverse skill sets that you‚Äôd consider ‚Äúmany and varied?‚ÄĚ

Why don‚Äôt they just say they‚Äôre looking for a mortgage broker to work on commission and sell people on applying for loan modifications?¬† They should let me write their ad on Craig‚Äôs List, I‚Äôd have the phone ringing off the hook.

‚ÄúNACA staff have a passion for and commitment to community advocacy and the delivery of excellent services to working people.

Home Save Counselors work from the Counseling Center and will be counseling homeowners over the phone. The Counseling Center is operating from 8:00 a.m. to 11:00 p.m.¬† Employees work on two shifts.¬† NACA, at its discretion, may change the shift hours.¬† All Counselors may be required to work longer hours or additional days to accomplish the work.¬† Some staff are provided the opportunity to participate in NACA‚Äôs Save-the-Dream events which occur throughout the country.‚ÄĚ

It‚Äôs funny too because a few months ago my wife and I bought my daughter a new car for her birthday, and we both have such fond memories of the ‚ÄúVehicle Attainment Counselor‚ÄĚ we worked with at the VW dealership.¬† Actually, by the time we left in our new car, he had also helped save our marriage and made me understand my inner feminine child‚Ä¶ oh, shut up, shut up, shut up!

He was a car salesman, which was fine by us as we were looking to purchase a car.¬† And I couldn‚Äôt pick him out of a line up today if there were prize money involved.¬† I can, however, describe the car we bought‚Ä¶ it‚Äôs a Jetta TDI, black and tan leather‚Ä¶ sunroof‚Ä¶ gorgeous.

‚ÄúCounselors,‚ÄĚ is that what we‚Äôre calling them now?¬† How stupid do they think we are?¬† I don‚Äôt have a stockbroker, I‚Äôve got a ‚ÄúMonetary Separation Counselor,‚ÄĚ is that the deal?

Look‚Ä¶ I have wanted to like NACA ever since I started reading about how Bruce Marks was delivering old furniture to the front lawns of bank CEOs‚Ä¶ he seemed like a guy after my own heart for a while.¬† But all I ever hear from homeowners is that they went to a NACA Revival Show, and either nothing happened, or something bad did.¬† It‚Äôs never a positive experience‚Ä¶ never.

And now maybe I‚Äôve discovered why‚Ä¶ commissioned mortgage brokers masquerading as ‚Äúcounselors from the community,‚ÄĚ making up to a grand for selling loan mods.¬† You know, I‚Äôve been wondering where all the mortgage brokers who used to sell loan mods went ever since the FTC‚Äôs and AG‚Äôs task forces started shutting them down a few years back, and the MARS rule pretty much put anyone out of business all over the country, if they weren‚Äôt already.

So, now I know‚Ä¶ they‚Äôre at NACA‚Ä¶ of course‚Ä¶ why didn‚Äôt I think if that.¬† I should have realized that they‚Äôd all end up as ‚Äúcounselors‚ÄĚ at a nonprofit housing counseling agency largely funded by HUD or other tax dollars of mine.¬† That is a truly lovely thought… now if you‚Äôll excuse me I‚Äôm feeling some projectile vomiting coming on.

By the way, it‚Äôs not as if I‚Äôm the only one who feels this way about NACA‚Ä¶ check this out‚Ä¶

The Neighborhood Assistance Corporation of America, in Boston, has scheduled an event June 28-July 2 at Cleveland’s Public Auditorium. The organization held a similar event in June 2009 at Cleveland State University’s Wolstein Center.

“NACA claims to have the best homeownership and foreclosure prevention program in the nation,” the local group’s statement said. “But that is no consolation to the hundreds of homeowners who were jilted by the organization the last time they came to Cleveland.”

“It is just petty organizational jealousy,” he said. “It should be about the homeowners.”

Yes, Bruce it should be about the homeowners, but you‚Äôre not exactly the one to be on that particular soap box, are you? 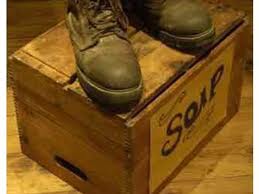 Can‚Äôt you just see an ex-mortgage broker telling some homeowner that they‚Äôll get a principal reduction and all sorts of other garbage because he needs the commish to make his Benz payment on Friday?¬† Close that loan mod, close that loan mod‚Ä¶ good Lord.

Lou Tisler, executive director of Neighborhood Housing Services, said NACA staff assured many Northeast Ohio homeowners in 2009 that they would get mortgage modifications to keep them in their homes. Often, the “guarantee” didn’t materialize, and the homeowners ended up at the local agencies, he said. By then, months often had passed, making it more difficult to prevent homeowners from going into foreclosure, Tisler said.

“I have nothing against Bruce Marks,” Tisler said. “I have something against an organization coming in and building up expectations for people and then leaving town not making people whole.”

Yeah, I understand that sentiment‚Ä¶ actually, no I don‚Äôt.¬† See NACA is Bruce Marks.¬† He set this thing up‚Ä¶ made it too big to be competent, and now it‚Äôs causing homeowner harm and setting them up to be closed like they‚Äôre attending a time share presentation.

Oh, and there have been 19 complaints filed since 2007, as far as the Ohio Attorney General’s Office knows, and that includes the complaints relating to telephone solicitations and foreclosure counseling. Gee‚Ä¶ so what does that tell us?¬† Maybe it‚Äôs that fewer people complain when they aren‚Äôt paying anything for the service they didn‚Äôt receive?¬† You think that could be it?

“Nineteen is a very, very small percentage given the number of people we’ve helped,” is how Bruce Marks responded, and he should try that argument out here with the State Bar or BBB.¬† I know firms with fewer than 19 complaints over the last four years, and thousands of satisfied clients‚Ä¶ and they have a D- with the BBB.

No matter anyway‚Ä¶ the complaints did not result in any action against the group, and why would they?¬† NACA‚Äôs a nonprofit with Home Save Counselors.¬† Now, if they were just a traveling circus of a high-pressure sale show hawking loans and loan mods, well, that would be another matter, right?

People, I don‚Äôt know what to tell you about whether you should go to NACA or not‚Ä¶ but if it were me and I was going to check it out‚Ä¶ I‚Äôd keep my wallet in my front pocket so it doesn‚Äôt get picked, and I‚Äôd be every bit as suspicious as when talking to any other kind of commissioned salesperson.

For the record, I tried sending a couple guys to one of the events once, but the NACA goons spotted them looking like they might be cognizant of their surroundings and they threw them out.¬† It would seem that Mr. Marks doesn‚Äôt think his show is ready for prime time.

Too bad.¬† I wouldn‚Äôt mind slamming a few seniors into some crummy mods in order to pick up a quick Ten Gs for this weekend.¬† Come on, Bruce‚Ä¶ I‚Äôd make one heck of a ‚Äúcounselor.‚ÄĚ¬† (Wink, wink.)