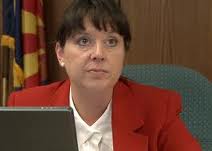 It’s an issue that begs to be turned into a riddle, such asŌĆ”┬Ā Who lives hopelessly underwater and in the desert at the same time?

Over this past year, Arizona State Senator Michelle Reagan (R) began a careful study of what appeared to be some very frightening numbers about her home state, but she was never willing to view them as a fait accompli.

“In Arizona we don’t ignore problems, nor do we pretend they aren’t there,” Sen. Reagan explains. ┬Ā“Obviously, the federal programs aren’t going to address our state’s needs, and that’s fine. ┬ĀWe’re perfectly capable of doing what’s best for Arizona.” ┬Ā

According to CoreLogic, as of the third quarter of last year, more than 50 percent of ArizonaŌĆÖs homeowners were underwater, meaning they owed more on their mortgage than their homes were worthŌĆ” 52 percent, to be specific.

If that werenŌĆÖt bad enough, according to the latest Case-Schiller survey, which uses data from the Federal Housing Finance Agency (ŌĆ£FHFAŌĆØ), by the third quarter of 2012, home prices in the Phoenix metro area are expected to drop another 9.6 percent, and the same study shows an additional 3.4 percent drop a year after that.

And the really frightening thing about such forecasts is that for at the last four or five years, the actual numbers have, in all cases, exceeded forecasted amounts. ┬ĀThe reverse is never true.

Why hadn’t he just walked away, was my immediate question. ┬ĀHis response was the his adjustable rate mortgage had been reduced annually and was now at 2.25 percent. ┬ĀWere interest rates to rise even to five percent and he’d be out of there in no time flat.

Want to know why there aren’t more strategic defaulters in places like Phoenix, AZ? ┬ĀNow you know.

So, whatŌĆÖs the federal governmentŌĆÖs response to the soggy situation?┬Ā Well, last fall the Obama Administration loosened restrictions on the HARP program, so now it can be used to refinance your home no matter how far itŌĆÖs underwaterŌĆ” 100 percent, 200 percentŌĆ” 300 percentŌĆ” it doesnŌĆÖt matter.┬Ā Of course, youŌĆÖll still be just as underwater as you were before, but you might shave a point or two off your interest rate, which might save you a couple hundred bucks a month… maybe.

Not surprisingly, the new HARP program has not exactly taken off like gangbusters in Arizona or anywhere else for that matter. ┬ĀAnd just imagining someone signing a promissory note that obligates one to pay an amount two or three times the market value of ┬Āthe property, will give you an idea why it doesn’t happen all that often.

MoodyŌĆÖs now pegs ArizonaŌĆÖs recovery in the housing markets at 2034, without adjusting for inflation. ┬ĀOne might as well have forecasted recovery as coming… never. ┬ĀWhen 70 percent of a housing market is underwater, and recognizing that under normal circumstances at least two-thirds of home buyers are also home sellers, it’s easy to see that future demand will look nothing like demand seen in past years.

More homeowners realizing they are hopelessly underwater and walking away would seem a certainty. ┬ĀCosts associated with foreclosed homes being incurred by the state are mounting beyond all previous forecasts and the resulting state budget deficits are becoming increasingly difficult to close. ┬ĀBy 2013, many state economies will be caught up in negative feedback loops that will prevent recovery as, for example, requisite budget cuts and tax increases further surpress consumer spending.

So, after five years of being told that next year would be better… Sen. Reagan had enough.

First, she set out to learn everything about the economic meltdown and the situation related to foreclosures and underwater homes, and once she understood the dynamics, she set out to find a way to free homeowners in her home state from the downward spiral in which they were clearly locked, because she came to understand that otherwise the state’s future could only be bleak. ┬ĀShe assembled a team of experts in various disciplines and the result is found in Senate Bill 1451, The Housing Finance Reform Act of 2012.

I like to refer to it as… Raising Arizona… or, sometimes as, “The shot heard ’round the world.” ┬ĀYou’ll see why soon enough.

Senator Reagan’s bill represents BREAKTHROUGH THINKING as far as solutions to the housing crisis are concerned. ┬ĀTo be blunt, there’s been nothing like it proposed anywhere as yet, nothing close… but that’s not going to be the case for long… already other state legislatures are taking a close look.

But, I’m not going to spoil it for you… CLICK PLAY BELOW and listen in on the conversation with Senator Michelle Reagan, along with key members of her team, Ira Hecht, Steve Kravitz and of course, yours truly, as we talk all about… what the bill is all about. ┬Ā

(You’ll also find a copy of the bill below.) ┬Ā

IF YOU WANT IT, YOU HAVE TO SPEAK OUT!

Sen. Reagan NEEDS YOUR SUPPORT to get this revolutionary mortgage financing bill passed into law. ┬ĀIt’s crucial that you email your state representatives and tell them how important this bill is to your life and your future.

To find email addresses for your state assembly and senate representatives…

It’s easy and only takes a few seconds, I promise.