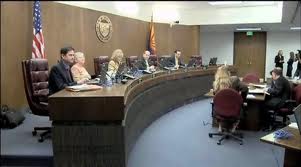 Arizona’s hundreds of thousands of hopelessly underwater homeowners are having the best day they’ve had since the “days of equity” back in 2006.  Even with opposition from professional obstructionists to change-in-anything-mortgage-related like MERS own William Hultman, and other banking industry lobbyists including James Lundy, president of the Arizona Bankers Association, among others… the state’s Senate Banking & Insurance Committee’s hearing this afternoon on SB 1451, the Housing Finance Reform Act of 2012, went exceptionally well.  The bill not only passed, but it passed unanimously… ‘6’ Ayes to ‘0’ Nays.

Hultman flew in to Phoenix last night around 7:00 PM specifically to testify at today’s hearing… and boy were his arms tired.  For those familiar with him from seeing him on C-SPAN and the like, I can tell you that he looks a lot shorter… when he loses.

Actually, Hultman didn’t have too much to say about the bill’s revolutionary approach to revitalizing the state’s increasingly water-logged housing market, which has left over 500,000 Arizona’s homeowners in a hopelessly immobile state.  He said a few things about how the new state program would add complexity and that MERS remains committed to working closely with Sen. Reagan to address the possibly unforeseen and snugligby pomid gibble hmzzzzzzzz … Oh dear.  Sorry about that.  Nodded off there for a moment.

Lundy, a silver-haired smooth talker that one imagines looks marvelous on the links or by the courts in crisp tennis whites delivered the standard banking industry objections… “I fear it will cast a pall over all lending in Arizona for at least a millenium…”  I’m paraphrasing, of course.

Other industry representatives were slightly more vocal expressing concerns that came across as pure scare tactics.  The state can be sued by taking title to a home for any environment damage?  Under the program the state takes title for about an hour… maybe two.  And, of course, all echoed how it’s unconstitutional and in general just not fair. 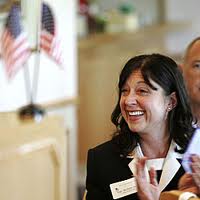 Sen. Reagan was quite adept at fielding all of the statements made in opposition to the bill… she was calm… entirely confident… and best of all persuasive and I think the rest of the committee fed off of her obvious conviction that the State of Arizona has seen enough of the federal government’s response to the housing crisis and needed to now take matters into the state’s hands.  She made very clear that her bill used private money, cost taxpayers nothing, and offered the equivalent of a much needed rescue ship to people adrift in a sea of unfairness created by the national players in the mortgage industry.

Reagan’s peers on the committee were impressive in their resolve as well, and as the Ayes had it, the bill seemingly passed the committee effortlessly and with a couple of revisions to amendments and the like, is headed to the full senate.  Senator Robert Meza (D-W. Phoenix), in explaining his Aye vote said that “the bill obviously creates tension… and if there’s one thing this problem needs it’s tension.”

The Arizona State Senators that make up the Senate Banking & Insurance Committee: Sen. Gray, Sen. Schapira, Sen. Meza, Sen. Smith, Vice-Chairman Reagan, and Chairman McComish, and although it’s only the beginning and there are certainly battles ahead, it was inspiring to see a bi-partisan group of politicians courageous enough to stare down the empty threats and scare tactics of the banking industry and put the interests of constituents above everything else.