Home  »  Economy Recovering? No, it’s not. Housing? NO. Unemployment? NO. Stock Market? NO.

Economy Recovering? No, it’s not. Housing? NO. Unemployment? NO. Stock Market? NO.

A couple of quick clarifications related to stories now in the news:

The way things stand today, housing won’t “bottom” this year, it won’t bottom next year, and it won’t bottom the year after that, and should you come across someone who has money and disagrees vehemently, please give them my email so I can make some extra cash on the side.

How do I know this?  Well, I’ve been right since 2007 and that would be pretty remarkable if there was anything else that could possibly have happened… but there couldn’t have been, so the more interesting question is how can all these people running our show be so consistently wrong?  That’s the question, and I’ve asked it before… are they stupid or lying?

Just try to remember what I’ve said countless times… NOTHING goes down in a straight line. 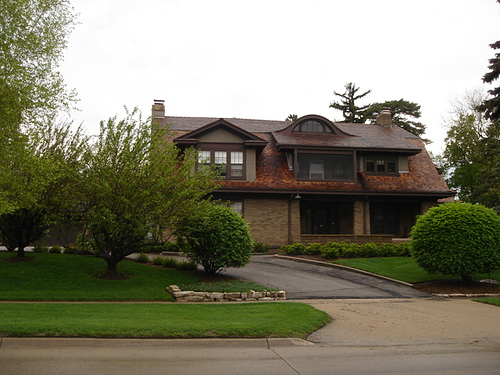 Warren Buffett admitted yesterday that he was “dead wrong” about housing when he predicted it would recover by now.  That’s cute, isn’t it?  The billionaire made a boo-boo.  Ooopsie!  But, he’s still a billionaire and the people that listened to him in 2009 and 2010 are the current wave of foreclosures at FHA, which by the way, is the new sub-prime and the next bailout for sure.

Buffett has no idea what he’s talking about.  He’s been living in the same house in Omaha, Nebraska since 1958.  Have you been to Omaha, Nebraska?  Well, I have.  And the fact that some multi-billionaire is still living in the same house he bought in 1958 in Omaha is not quaint… it’s not “old school.”  It’s f#@king nuts.  Insane.  Weird.  Like, as in… needs some sort of clinician to diagnose it, sort of weird.

I don’t know what his deal is… but I’ll bet it’s difficult to pronounce.

B. NO, unemployment is NOT “down.”  The only thing that changed to any significant degree is the participation rate, which dropped to its LOWEST point in 29 years.

The participation rate sunk to 63.7 percent last month, which is the lowest since May of 1983!  Do you remember 1983?  I do, and it was God awful.  It means that roughly 88 million people in this country over 16 years old not only didn’t have a job, but weren’t even trying to find one.  Not even trying.

I’ll bet they’re a cheery, upbeat bunch.  Probably all out looking for houses to buy now that we’re hitting the bottom and all.  Maybe Buffett will put them to work so they can all buy homes in Omaha…. and then kill themselves.

The employment-to-population ratio, which is the percentage of Americans that have jobs… HAS NOT CHANGED AT ALL.  It’s 58.5… the SAME as it was in January 2010.  Oooh baby… what our dust, we’re recovering now.

Oh, wait.  That’s right… I totally forgot… everything’s fine… it’s a “jobless recovery,” remember?  So, why is Bernanke so worried about the whole unemployment thing anyway?  It’s “jobless” so we’re right on track, we’re in line with the forecasts… hitting the numbers perfectly.

The “headline” unemployment rate in which we like to bathe in this country only counts people who answer the phone and tell the survey taker that they’re actively looking for work.  And if more people were looking, then the unemployment rate would be a lot higher.  So, what Obama really needs is for more people to STOP LOOKING.  And if that doesn’t make you want to chew on glass all by itself, then I don’t really know what to say to you.

Seems like most folks are cooperating though, because at the beginning of this month, based on the latest census data, the Labor Department increased the number of working age people by 1.5 million, and of those 1.25 million were not even looking for work, so you gotta’ figure they’re all Obama supporters, right?  Just doing their part.

Bloomberg’s got the data here, in case you feel a need to check my numbers.

C. NO, the stock market at 13,000 doesn’t mean anything good.  Think of it as Bernanke pushing string.

The Fed chief continues to do the only thing he can do, I suppose… come right out and promise low interest rates until at least 2014 and pump money into the system like a mad man.  The problem is that money isn’t exactly going places.

Since the recession in 2008, M1 money supply has increased by an absolutely jaw-dropping 60 percent, coming in over $2.2 trillion in January of this year, and with no end in sight… it’s going higher for sure.  And tons of cash makes the stock market happy, but today’s cash flood isn’t doing much for the economy.

Money supply is one part of the equation, but the other component to the deal is called “velocity,” and the velocity of money in this country has fallen off a cliff, going from 10.37 in late 2007 to 7.09 as of late 2011.  Ouch.

Velocity of money is about how fast money is changing hands, buying goods and services… you know, making for economic activity.  And the scads of money Bernanke continues to pump into the system with reckless abandon isn’t moving… it’s not changing hands… he’s just pushing string, get it? 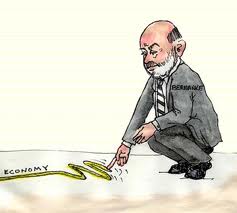 As a result of all this, what they call the M1 “multiplier” has stayed below the 1.0 level for the last three years.  The multiplier effect is an economics term that refers to the amount of commercial bank money that’s created by central bank money.  So, it’s like the Fed increases it’s loans to banks and its purchases of government securities (called bonds) and by doing so pushes money into the commercial banks who are in turn supposedly “encouraged” to loan it out and earn interest, and thereby turn the Fed’s one dollar into more than one dollar.

Except it’s not happening, right?  In fact, between August 2008 and November 2009, bank reserves grew by 500 fold, from $2 billion to one trillion.  The banks didn’t lend it out.  They didn’t find the excess money very encouraging.  Do you know why?  Because they knew that we were getting screwed, that’s why.

They knew we were in debt big time, because they’re the ones that put us there, and they knew that we’d be getting no help from the government, so there weren’t a whole lot of people to lend it to without taking on too much risk.  So, they just kept it.  And that’s why I keep saying, it’s not a liquidity crisis, it’s a credit crisis.

So, you know you have a credit crisis if the money multiplier is 1, right?  Because if banks were lending the money out, the multiplier would have to be greater than one, right?

And when you have a credit crisis, then many people can’t buy houses, and that means that the prices of houses will go DOWN.  And that means that we won’t spend like we used to when our houses were worth a lot more and there was credit available, and that means companies will make less money and lay people off.  And that leads to more foreclosures, which puts additional downward pressure on house prices, which leads to more foreclosures still.

So… super low interest rates for an extended period of time… literally trillions in cash sitting in bank reserves with more being pumped into the system every day, but with the velocity of that money falling and a multiplier that stays at 1… add it all up and what do you get?

Well, on one hand you get a stock market that’s artificially pumped up by the Fed’s assurance of continued low rates, and a free flowing money supply.  But on the other hand you have anemic velocity, a multiplier stuck on 1, and unemployment that’s only getting worse, which means company’s won’t be growing they’ll be shrinking… so you has is an economy that’s deflating.

Bernanke would rather deal with just about anything than deflation, so he just keep a-printing and a-pumping hoping against hope that one day the banks will be so bloated with cash that they loan it to anyone that asks.  It’s really quite sad, if you think about it.  Poor little man… only knows one trick and when it isn’t working all he knows to do is just try it over and over again.  Makes me get all teary eyed, poor guy.  Someone should really teach him a new trick.

Last thing… take the artificially pumped up stock market and hold it up next to the dog-doo economy and what do you see?  You see some seriously over valued stocks, which is another way of saying that you see stocks priced to deliver some exceptionally poor returns to investors. 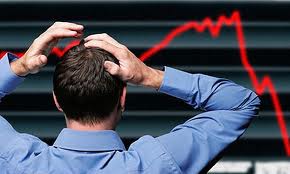 Because one day, the Fed won’t be able to pump, because the pump she will run dry, as all pumps do.  And then what will be holding up the market at these levels… uh oh… no clothes… run away!

Then you’ll hear, “Come Mr. Tally man, tally me banana,” and daylight will come and you’ll want to go home.

So… housing is not, not, not at bottom, – check.  Unemployment not improving – check. And does the stock market at 13,000 mean something to the economy?  Nothing good – check.

You might want to bookmark this page, so as the election gets closer and thing get even better than they are today, you’ll be able to contain yourself.