Come on now, tell the truth… the GOP doesn’t want to win the White House in 2012, right?

Haven’t you figured it out yet… if it wouldn’t be so rude, the GOP convention would be nominating OBAMA in 2012, right?

That’s why they’re running Newt, Santorum, Bachman, the black guy with hundreds of sexual harassment suits filed against him that he supposedly knew nothing about, what was his name?  He was awesome.  Rick Perry, another Texas Governor who can’t talk?  Ron Paul isn’t even a Republican, so don’t even go there.

There was Gary Johnson, or was his name John Garyson?  Jon Huntsman was Mormon 1.A.  And Tim Pawlenty had a cup of coffee in the race, took one look around and had to get back to running Minnesota.

Oh wait, I forgot about Thaddeus McCotter?  But then, so did you.

I think the inside joke was that no one told Mitt Romney that the whole thing was a giant gag… that they actually wanted Obama in 2012.  So, Mitt thought the others were actually trying to win. So then, remember when The GOP debates were in Nevada?  And they asked Mitt what to do about foreclosures and someone told him to say that he thought they needed to happen faster?  In Nevada?  Foreclosures need to happen faster?  Come on now… I was rolling on the floor.

I just know I’m right about this.  What about Newt’s plan for 9 year-old janitors in poor neighborhoods?  And you want me to believe that he’s seriously campaigning for president?  Come on now… and Newt’s in first or second place?  Sure he is. The man asks his wife for an open marriage, consults for Freddie Mac and bounces ten grand worth of checks… and then wins in South Carolina?  Look, I was born at night, but it wasn’t last night.

And the Godfather’s Pizza guy… Cain?  That was like a Saturday Night Live sketch.  Every day two or three more women show up and start yelling about how he sexually harassed them.  He had no idea that might happen?  Uh huh, sure.

Don’t even get me started on Bachman… I mean, who would have ever thought that Palin’s job could have been at risk.  But along came Michelle and she said, among so many other zingers…

Or what about when she was in South Carolina and she said “Happy Birthday” to Elvis on the anniversary of his death?  She was like watching Phoebe on the television sitcom, “Friends.”

And wasn’t Donald Trump in the race at the beginning too?  People, this is a show for sure.  “Candidate Trump, if you were president, what would you say to the leader of Iran.”  And Trump responds: “I’d simply tell him… You’re Fired.”  (Insert laugh track here.)

I knew something was up for sure when Huntsman started making sense, and they got rid of him immediately. 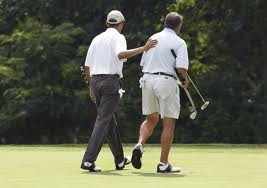 Ask yourself this question: Why would the Republicans want Obama out?  He does everything they want and more.

He gave Wall Street untold trillions with no conditions… never closed Guantanamo, is still rearranging rocks in Afghanistan, made Bush look good by winning in Iraq… said he was going to spend $75 billion on helping homeowners but only spent $2.4 billion… let the bankers pay themselves whatever they wanted… threw out health care reform and replaced it with a gift to health insurance insurers…. didn’t regulate derivatives… what more could Republicans ask for?

Obama even alienated enough Democrats and Independents to hand the House back to the GOP in the midterms. Four more years of Obama and the Republicans will have a filibuster-proof majority in the Senate too.

I’m sure the GOP wanted to just go ahead and campaign for Obama in 2012, but how rude would that have been.  I mean, if Mitt Romney had come out saying what a great job Obama has been doing?  That would have been a total ‘no respect.’

So, they had to run someone who they could be sure had no shot whatsoever.  They put the word out and so may showed up, that they just said… “Go ahead, you can all go at it.  We’ll just book a hundred debates so you can all have a chance to pretend you’re running for president.  Just make sure you don’t start making sense out there.”

Mitt’s not sure what’s going on, so he just keeps changing his positions on everything.  They must have someone working with him every night so he knows how to cover the issues properly.

Of course, every time Obama goes on television they have to send Newt back out there to make sure he doesn’t actually win.

Hey, you can believe what you want.  I’m just saying…