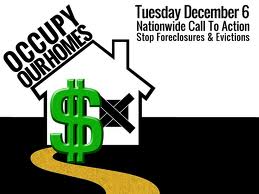 I’m actually quite proud to be able to say that I’ve inspired a few people around the country to help homeowners. ¬ÝTwo lawyers have written to me to say that they’ve come out of retirement to help defend homeowners in court, for example. ¬Ý¬ÝOhioFraudclosure is a blog written by Marco, who, at least partially, has been inspired by Mandelman Matters… he’s a very nice, caring, and dedicated person who started a blog to help homeowners… and it’s not an easy thing to do, as I know… so, I’ve tried to help if I can, and he’s always willing to help me as well.

Marco was sort of peripherally involved in the Occupy Foreclosure movement that launched on December 6, 2011. ¬ÝHe had contacted a homeowner he knew was about to be evicted to see if he would want the Occupy folks to occupy his home in an attempt to delay the eviction. ¬ÝThe homeowner declined, saying that his wife was recovering from being in a car accident. ¬ÝI interviewed Marco¬Ýin the second half of my Front Line News podcast, if you’re interested in hearing him explain what happened… he actually DID stop the eviction that was attempted… it’s one heck of a story, actually.

So, below is a video that Marco just put together. ¬ÝIt’s dramatic… disturbing even. ¬ÝAnd okay, the music is a tad over the top. ¬ÝIt includes footage of the sheriff coming to evict a family, obviously without notice… or at least without adequate notice. ¬ÝMarco put the video together to let people know that the Fannie and Freddie annual-moratorium-for-the-holidays is ending on January 3rd.

And for the rest of the story, please click on over and check out Marco on OhioFraudclosure… he’s very complementary about Mandelman Matters.

A land once filled with promises…Where the American Dream was a family‚Äôs home,
has now become the land of broken promises and shattered dreams.
Sounds of children crying ….haunt parents ….who find it hard to sleep…
Everyone……waiting…. for the next knock or pounding….on the front door.

Communities are being destroyed, as families disappear into the night.
This will leave heavy scars on¬Ýthe very¬Ýfabric of our nation.
These wounds are so deep‚Ä¶it will take a generation…or two….to heal.
3,000 ….EVICTIONS….¬ÝEVERY SINGLE DAY of the YEAR.
Maybe not today, or tomorrow, but ……THEY ARE COMING
They come……often with little or no warning.

Fannie and Freddie stopped foreclosing for the holidays, but only for a brief moment,
They did not stop…..out of the goodness of their hearts.
They paused, so no one witnesses THE HORRORS OF THEIR ACTS AT CHRISTMAS.
The powers that be ….wouldn’t want the world to see…..this sheer terror
January 3rd is coming and the daily mass evictions need to be ramped back up….again