Two Movies I Want to See… Bailout! and Margin Call

Fed up with corrupt ābail-outā banks trying to foreclose on them, five Chicagoans drive to Vegas with stacks of cash withheld from bailed out banksāto give themselves a long-overdue bailout of their own! 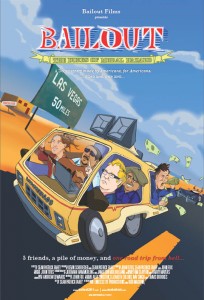 A feature documentary that explores the causes and effects of Americaās financial crisis: after losing his job as a big-firm lawyer, Titus withholds his mortgage payment from a major bailout bank for several months. Seeing his friend rack up tens of thousands of dollars, comic John Fox wheedles Titus into taking a Winnebago excursion to the Las Vegas Tropicana where Fox has a stand-up gig. Three unemployed friends join them for a frenetic party of gambling and vice at ground zero of the foreclosure storm caused by the financial crisis.

Along the way, they see first-hand how politically powerful banks are systemically eliminating Americaās middle class through off-shored job losses and fraudulent home foreclosures. An enigma wrapped in Doc-hybrid form, Bailout is a social documentary that explores American anger with the Wall Street elites who survive and thrive on their cancerous system of bailouts, fraud, and political corruption that actively work in concert to destroy Main Street.

From entry-level workers in northeast Indiana RV factories to Congressional leaders to rock stars, Bailout will tell the story of recent American economic events through the mouths of people who labored through thick and thin–what it was and how it has affected us all. 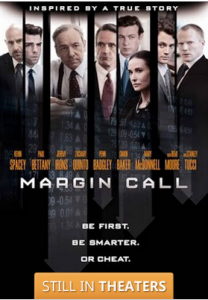 Set in the high-stakes world of the financial industry, MARGIN CALL is an entangling thriller involving the key players at an investment firm during one perilous 24-hour period in the early stages of the 2008 financial crisis. When an entry-level analyst unlocks information that could prove to be the downfall of the firm, a roller-coaster ride ensues as decisions both financial and moral catapult the lives of all involved to the brink of disaster.