Home  »  How does stuff like this still happen in this country?

How does stuff like this still happen in this country? 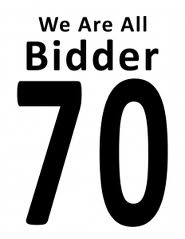 So, have you heard about “Bidder 70,” a 27 year-old guy by the name of Tim DeChristopher who wanted to protest the auction of public lands in Utah to Big Oil and Gas that had been approved by President G.W. Bush during his last days in office?

You know, right before presidents leave office, they always do something that seems pretty close to being an abuse of power… didn’t Clinton pardon a bunch of folks?  Well, Dubya approved drilling for oil and gas on lands adjoining national parks and places like that.

No surprise there, right?  Dubya would have approved drilling anywhere, and I’m not saying I agree or disagree with that sentiment just that drilling for oil and gas is a Bush family tradition.

So, Tim showed up at the auction with no real plan as to what he would do, maybe yell out something, or hold up a sign, but while standing in line, someone came up to him and asked if he was here to bid and he said sure and next thing he knew he was given a bidding paddle.  He was now Bidder 70, and he bid on various parcels until he was the highest bidder, thus stopping Big Oil and Gas from getting the land.

Now, let’s just pause for a second… I’m not saying that what Tim did was right, and I’m sure someone could come up with a criminal charge for it, but here’s an idea for how to put a stop to such protest pranks… 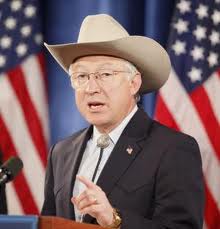 Memo to Interior Secretary Ken Salazar (he’s the jackass playing cowboy dress-up in the photo above that’s running the Bureau of Land Management and has the power in this situation)… If you don’t want this sort of thing to happen… maybe stop handing out bidding paddles to every Tom, Dick and Harry that shows up in a baseball cap.  Maybe before allowing someone to come in and start bidding, you might want to make sure they actually have the many millions of dollars needed to actually bid.

So, next thing that happens is Bush retires to his ranch in Texas, and Barack Obama appoints a former attorney general and senator from Colorado, Ken Salazar as Secretary of the Interior.  And wouldn’t you know it, partially because of Tim’s disrupting the auction and partly because of a lawsuit that was at least partially inspired by Tim’s prank, the new Interior Secretary determines that the auction was in fact largely being held illegally, and all but something like 22 parcels of land are saved.

Okay, pause number two… I personally would have thought the story would have ended there.  The auction folks should be embarrassed for handing out bidding paddles to anyone and everyone, and since the auction, as it turned out, was in fact being held illegally… I mean, who wants to prosecute the 27 year-old protester for a first offense that’s only going to make him look courageous for having done what he did, and really is civil disobedience.

But, I’d be wrong to think any of that, because the jar heads at the Justice Department and FBI arrested Tim, who proceeded to be very candid, telling them the whole story.

The thing is that tomorrow Tim, who has already been convicted of the crime, could be sentenced to 10 years in federal prison and a $750,000 fine!  I’m not kidding about that, you’ll see… I’ll give you all the links you need to verify every word I’ve said.  Here’s what the U.S Attorney had to say:

In particular, a term of imprisonment will (a) comport with the nature and circumstances of the offense and the history and characteristics of the defendant; (b) reflect the seriousness of the offense, promote respect for the law, and provide just punishment for the offense; (c) afford adequate deterrence to criminal conduct; and (d) protect the public from further crimes of the defendant. The Court may also consider other aspects of the sentence, including a fine and restitution.

Can you imagine this actually happening in this country?  I mean, last night there was a midnight vigil in Salt Lake City with Peter Yarrow from Peter, Paul & Mary leading everyone in “If I Had a Hammer,” and songs like that.  I should be there, and would have had I known sooner.

Here’s the thing… Tim was convicted because the judge wouldn’t allow him to tell the jury his motivation for committing this act of civil disobedience… that’s right, you read that correctly… the judge wouldn’t allow Tim to tell the jury why he was there in the first place… OR THAT THE AUCTION WAS LATER DEEMED ILLEGAL by the incoming Secretary of the Interior.  The jury was not permitted to know either of these facts.

Why?  Because Judge Dee Vance Benson said something to the effect of… he doesn’t want his courtroom turned into a debate over global warming.  I swear, that was the essence of his reasoning.  Tim could end up in jail for a decade, and then have to pay a $750,000 fine because a judge doesn’t want a debate on Global Warming.

Really?  Well, here’s a judge who does not deserve to be called “Your Honor.”  Dee Vance Benson was appointed by Dubya… before that he held such jobs as Chief of Staff for Sen. Orin Hatch.  Gosh, I wonder what Benson’s personal views on the environment are, don’t you?

Had Tim been allowed to present the actual facts of the case, his lawyers would have been able to use something called the “Necessity Defense,” which would have allowed the jury to determine whether Tim’s acts were the lesser of two evils, as stated here:

The necessity defense would have allowed Tim to offer the jury his motivations, so that they could weigh whether Tim’s nonviolent action was the “lesser of two evils” in that it stopped the development of rare and wild lands as sources of dirty energy and contributions to catastrophic climate change.

If Tim is sentenced by this kangaroo court tomorrow, his entire life will be ruined.  Ten years and a $750,000 fine at 28 years old is pretty much game over.  Eat a gun.  Thank you for playing.

To be sure, the defendant’s crimes are serious. He lied, obstructed lawful government proceedings, and caused extraordinary loss to others. Unilaterally, he played out the parts of accuser, jury, and judge as he determined the fate of the oil and gas lease auction and its participants that day.

Oh, for Christ’s sake… get over yourself.  The auction wasn’t even legal.

His spontaneous course of criminal conduct was neither necessary nor justified. Rather, it was self-centered and juvenile, and lacked the fortitude and diligence that would be characteristic of the very movement that he claimed to represent. He left behind the myriad legal alternatives available to address his concerns, and opted for on-the-spot recklessness.

For example, he did not take the time to articulate reasoning in a filed formal protest within the BLM proceedings. He did not initiate or join a lawsuit to bring to light perceived impropriety in a court of law. Nor did he focus creativity and sacrifice as others did in freely voicing their objections to the auction in the public forum. These lawful means and others most likely led to eventual cancellation of many of the parcels up for auction that day. It was not the defendant’s crimes that effected such a change.

MOST LIKELY, Counselor? Yeah, well I think you’re full of crap because you don’t want Tim to even be able to tell the jury about why he was there.  You, Mr. U.S Attorney, are the one suppressing information at the trial.  Why?  If you’re right in what you’ve said here, why can’t it be brought up in court?  Tim’s actions may not have been the only factor in the auction being deemed to be illegal, but his actions didn’t hurt, did they?

Here’s the Prosecution: Sentencing Recommendations for Tim DeChristopher, so you can read the whole ridiculously overly dramatized thing.

And here’s a response to that document: Why the prosecution wants a harsh sentence for Tim: To stop YOU from taking action.

And I’ll say something else… if I were on this jury and later found out that we had convicted someone without being allowed to know of these facts, I’d be so pissed off I’d never stop screaming about it.  How the f#@k can this kind of crap be going on in this country in 2011?  Doesn’t our government understand that it’s important that we love our country… respect it… care about it?  Who’s in favor of what’s going on here? 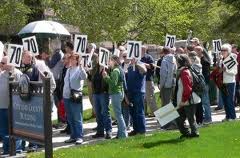 So, last night was the midnight vigil and I understand that Darryl Hannah and other Hollywood types will be in the courtroom on Tuesday for the verdict. And here’s a series of 7 videos that are worth taking a look at:

For my part… and yours, if you feel like I do about this… I’m going to be sending emails to my elected representatives and to the White House expressing my disgust at a government that would do this.  You see, all this is… it’s a way to keep the rest of us in line, right?  What else could it be?

Don’t speak out, don’t protest… don’t take any chances… and whatever you do don’t bid on land at an auction when Big Oil and Gas are trying to illegally steal national park type land from the American people.  See what happens when you do… we have all the power… you’ll take it, whatever it is, and you’ll like it… or we’ll take away your life.

I think it’s worth mentioning that the U.S. government today is the largest owner of residential real estate in the whole world, did you know that?  Yep, the same government that FAILED MISERABLY, from a regulatory perspective, to prevent the bankers from bankrupting the global financial system and destroying the credit markets overnight in 2007, ended up owning the homes they allowed the bankers to steal, as opposed to modifying the loans.

And soon, just to put a cherry on top of the whole fiasco, while we watch that same government run away from prosecuting anyone for crimes, we’ll get to see them bulldoze the now empty homes to the ground.

I suppose we should all sit quietly and take that too, right?  Fine, but don’t come around me spouting any of that “GO USA” we’re the best nonsense.  Because we’re not.  Not anymore.  We are disgusting as a nation.  Are we going to start arresting people who wear their hair long and patch their jeans with American flag again?  Shining, gleaming, streaming, flaxen, waxen and someone get a rope?

I hope you’ll speak out about this, but I’m going back to bed.