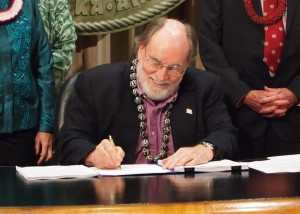 At 4:00 PM today, May 5, 2011, Governor Neil Abercrombie signed into law SB 651, unquestionably the toughest foreclosure mediation law in the nation. Ā The new law includes a moratorium on what are referred to as Part 1, non-judicial foreclosures, and amends Part 2, nonjudicial foreclosures to no longer require the borrower’s signature on the Deed of Trust.

Those are important changes for homeowners in Hawaii because most of the large mainland banks have been pursuing the Part 1 non-judicial foreclosures, which offer the fewest consumer protection provisions. Ā Going forward, banks will have to seek to foreclose under Part 2 non-judicial rules, or follow the rules of the judicial foreclosure process. Ā But, that’s not all that’s sure to make national news…

The new law makes mediation prior to foreclosure MANDATORY if requested by the borrower, and requires mortgage servicers attempting to foreclose to submit to the mediation board, 14 days prior to mediation, proof that the chain of title is intact, including the “promissory note, any endorsements, assignments, allonges, amendments or riders to the note evidencing the mortgage debt.” 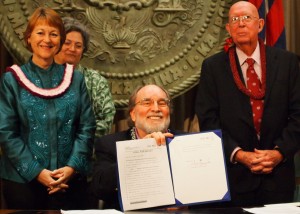 Usually, the governor signs bills over the summer months, but Sen Roz Baker, who sponsored the bill along with Rep. Bob Herkes, had told me the day of the bill’s passage that she would be contacting the governor as soon as it had been enrolled to his office and asking him to sign it immediately. Ā Quite obviously, she was successful becauseĀ Governor Abercrombie signed the bill into law just a two days after it was passed by the legislature, which feels like some sort of record… although I don’t really know if that’s the case.

The question on the mind of those familiar with the situation is, how will the banks handle the new law governing Hawaii’s foreclosures in the future. Ā Undoubtedly, many in the financial industry are holding meetings to try to figure out how to proceed under the new law.

With Part 1 non-judicial foreclosure no longer an option, they could file under the Part 2 rules, but should the homeowner request dispute resolution through mediation, the servicers must get their ducks in a row, and that may not be something many can do. Ā And under the new law, should a servicer be deemed not to be negotiating in good faith, there are serious sanctions that could be imposed. Ā (I suppose they could try robo-signing lost note affidavits, but or manufacturing other documents, but that’s probably a bad idea.)

The other alternative is to file for a judicial foreclosure, which requires a judge to hear the case and ultimately grant the foreclosure, and all you have to do is take one look at the State of Florida’s courts, with their back-logs and judges refusing to rubber stamp foreclosures without the proper documentation having been provided by the servicers… and you’ll see why servicers might be hesitant to taker that route.

There is a third option, of course… and it’s the one that would have made all of this unnecessary… they could contact borrowers and agree to modify loans so people can stay in their homes, assuming they can afford a modified payment. Ā I call this “preventing preventible foreclosures,” and it needs to be done in all 50 states. Ā I think it’s worth noting that, had the banks taken this approach from the beginning, it’s quite likely the new law wouldn’t have been necessary.

The fact of the matter is that banks have been exceedingly difficult to deal with, treating borrowers poorly, keeping homeowners calling on hold for hours, repeatedly losing paperwork, failing to live up to promises of modification, foreclosing while borrowers are still under consideration for a modification, failing to inform borrowers of the reason for being denied… the list longer than my arm. Ā Servicer behavior has been so bad, that several states are suing major banks for loan modification fraud. 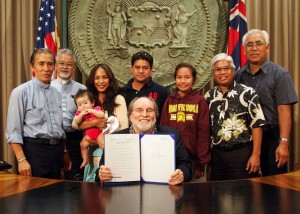 So, Hawaii’s new foreclosure law is the toughest in the country today, and hopefully will become a model for other states (which is I’m sure the financial industry’s greatest fear.) Ā It remains to be seen how the industry will respond, but with governor now having signed the bill into law, we’ll know soon enough.

Perhaps it will force the bankers to do what they should of done from the beginning, and perhaps the other 49 states will follow suit… and perhaps this will one day be seen as the beginning of the end of this country’s foreclosure crisis.

The people of Hawaii should be very proud of their politicians today… they joined together and accomplished something very good for the people and the state’s economy… and they did it quickly and without undue influence by industry lobbyists. Ā And these days, that’s unheard of and nothing short ofĀ miraculous.

So, I hate to even ask, but do you suppose the rest of the country could borrow them to run the federal government for a while… you don’t have to answer now… just thinking out loud over here.