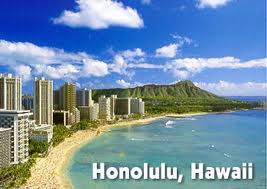 Have you spent any significant amount of time in Hawaii?  If not, this story may not have the significance that it undoubtedly will for those that have come to know and love the islands.

This past Monday, a group of about 16 Hawaiian homeowners charged in Bank of America’s loan office in downtown Honolulu armed… with Valentine’s Day cards.  According to HawaiiNewsNow.com, on the cards were sentences like:

“Send an authorized loan modification negotiator to Hawaii by February 28.”

One of the bank’s manager types came out to greet them.  He said that he was sorry, but they didn’t have an appointment.

The Rev. Sam Domingo of Faith Action for Community Equity or FACE, who the story said is advocating with the homeowners replied… “No we don’t.”

Domingo explained: “We’ve been wanting to make sure that somebody from the main office comes down so they can deal face to face with foreclosure issues.”

Eddie Amaral, a Kalihi homeowner who says he’s been trying to get Bank of America to modify his loan for over a year said: “It’s just been very difficult and we would like to have someone authorized come here and negotiate a fair modification loan. That’s why we are here.”

Jun Yang, a FACE Organizer added: “We have families who have been trying to reach Bank of America and they have not been able to get a fair chance.”

The bank manager, who had to be wondering right about then if his life insurance policy was all paid up, responded: “With all due respect I do appreciate your time. I will pass this along to our media line and to the people that you asked. I don’t personally handle that.”

Five minutes passed… which must have seemed like an eternity, and then another bank manager asked the group to leave.

One of the group’s members suggested: “Maybe we can present our Valentine’s to the gentleman.”

The bank manager, who surprisingly declined to provide his or the other manager’s name to the news reporter from KGMB/KNHL – Hawaii News Now, said no to the Valentine’s Card offer and again asked the group to leave.

So, the group posted their cards of love on the bank’s window and started to sing a song they wrote for the occasion.  It went like this:

Really quite a lovely little ballad, if you think about it.  It doesn’t rhyme, but then… I think that’s the point.

After their stop-and-chat at the bank, the group apparently went over to the state capitol to drum up support for legislation that would force banks to meet with homeowners face to face prior to foreclosure.

Yeah, well that ought to do it… we have that same kind of law on the books here in California and it’s certainly taken care of our state’s foreclosure problems.  Now, before a bank can foreclose, they have to include a “declaration” that says they tried to resolve it with the homeowner, blah, blah, blah…

You know… I’ve been wondering when the Hawaiians were going to get into the game on this loan modification foreclosure thing and there you have it… and they brought Valentine’s Cards and sang a song.

Now, I’m not an expert on Hawaiian culture, by any means, but I have spent quite a bit of time on several of the Hawaiian Islands and feel like I’m qualified to translate the meaning of the group’s visit for Bank of America’s senior management here on the mainland.

Memo to Bank of America… you’re a guest on their island… I’d show some respect if I were you.  They’re expecting you to send a negotiator over by February 28th because as their lovely song said… “It’s time to meet with us,” and I’d say that means that it’s time to meet with them.

This time they brought Rev. Sam Domingo with them.  He was there to protect you, not them.

Of course, you’ll probably ignore their very polite words because… well… because you’re Bank of America and you don’t learn anything the easy way, now do you?  No, I don’t suppose you do.  You know the Hawaiians are really some of the most loving and wonderful people on the planet.  If you respect them, they will respect you.  If you don’t… well, don’t be surprised if next time one of your mainland managers try to say something to a group like that and you hear something is response that sounds like:

Because next time, the card they hand you might just read:

And there won’t be anybody singing.