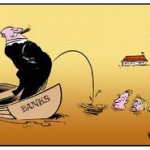 You may not know this because itâ€™s not been well publicized, but each month the Treasury Department reviews a sample of the loan modification decisions being made by HAMP participating servicersâ€¦ it’s called â€śSecond Looksâ€ť.

Apparently, if that monthly review indicates that Treasury disagrees with a servicerâ€™s decisions to modify loans more than the average amount of disagreement, or if the percentage of disagreements does not come down over time, it will require the servicer to change how such decisions are made.Â  (Did you get all that?)

Well, in the August HAMP Report, which is published monthly by Treasury, is a chart that shows that Treasury has disagreed with a higher than average number of the decisions being made by CHASE, Wells Fargo and Bank of America.Â  And Housing Wire is reporting that Treasury says that it will now REQUIRE the three giant servicers to change how they determine homeowner eligibility going forward.

Well, what do you know about that?

Curiously, Bank of America is conspicuously absent from the chart, and according to Treasury, â€śother compliance activities were conducted in this time period that included the same processes evaluated during Second Look reviews.”Â  And I have no idea what they mean by that, but alrighty then.

Treasury says that it has asked all three servicers to reevaluate loans that were denied HAMP modifications.Â  The servicers are now being required to submit additional documentation, provide clarification of the loansâ€™ status, and make changes to their processes, including the implementation of new training programs that further clarify policies.Â  And the irony of that, I trust, is not lost on anyone reading this.

(Wouldnâ€™t it be beyond great if after the servicers submitted the additional documentation requested, Treasury were to contact the servicers and tell them that they have to resubmit everything because they didnâ€™t receive it, and then a week later send the servicers a letter telling them they missed the deadline and a sale date is now set for two weeks away.Â  Oh, I knowâ€¦ but, a boy can dream, right?)

So, what did the servicers have to say?Â  Can you guess?Â  Iâ€™ll bet you canâ€¦

Wells Fargo told HousingWire that as related to the decision index, Treasury reviewed 100 loans from each of the bankâ€™s five servicing businesses, and wouldnâ€™t you know itâ€¦ they didnâ€™t weigh them properly.Â  Of course they didnâ€™t, and I didnâ€™t expect them to.

JPMorgan Chaseâ€™s spokesliar told HousingWire the changes being requested by Treasury were already made but could not disclose details.Â  Of course they couldnâ€™t, and I would not expect them to be able to.

Bank of America was not immediately available for comment, but if they had been available, they probably would have responded by saying something like: â€śBank of America fully supports our troops in Afghanistan.â€ť

Treasury estimates that among the three servicers there are more than 724,000 mortgages that could be eligible for HAMP, which represents more than 54% of the entire program.Â  HAMP launched in March of 2009, and to-date the three servicers have completed 189,621 permanent modifications under HAMP, which works out to about 3,326 each per month. Iâ€™m almost positive, however, that foreclosures have been running well over 300,000 a month during that same time period.Â  If Iâ€™m wrong about that, Iâ€™m not wrong by very much.

And thatâ€™s according to Treasuryâ€™sÂ  August HAMP Servicer Performance Report.Â  Check it outâ€¦ or not.Â  Itâ€™s not exactly a page-turner.Â  You could wait for the movie.

So, the obvious question isâ€¦ will this change anything, or will the servicers just continue to slap American homeowners around at will, before peeing in their hair.Â  If you ask me, the answer isâ€¦ I donâ€™t know.

I do believe that it cannot get any worse, and I also believe that itâ€™s actually much better this year than it was last year.Â  Call me naĂŻve, call me an eternal optimistâ€¦ call me insane, but I still have some fundamental faith in this country to ultimately demand and deliver some level of fairness.Â  I know, I knowâ€¦ but I havenâ€™t give up yet, and I still believe we the people are going to win.Â  Because weâ€™re right.

Either that, or we’re all screwed.