GM, GMAC & the US Government… Have You No Shame? 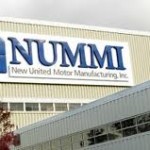 In 1984, General Motors and Toyota entered into a joint venture, and they called it the NUMMI plant in Fremont California. Up until May of 2010, NUMMI built an average of 6000 vehicles each week, or nearly eight million cars and trucks. GM saw the joint venture as an opportunity to learn about manufacturing from the Japanese company.

Then the financial meltdown of Wall Street came. Bankers constructed bonds that were designed to default, took advantage of holes in the ratings agencies’ systems, sold them around the world, leveraged themselves 30:1 and more, and profited immensely by betting against them with credit default swaps. It wasn’t the fault of the employees at GM’s NUMMI plant, they had nothing to do with it, but they were about to pay a steeper price than the Wall Street bankers would pay.

GM pulled out of the venture in June 2009, and several months later Toyota announced plans to pull out by March 2010. Roughly 5,000 people, many of whom had worked at the plant for twenty years would lose their jobs, their retirement plans… everything. 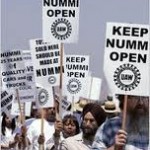 At 9:40am on April 1, 2010, the plant produced its last car, a red Toyota Corolla S. Production of Corollas in North America was moved to Canada. It was over.

The faces of the NUMMI plant.

Of course, it wasn’t the first time a GM plant had closed leaving thousands of workers without jobs, far from it. But this time it was different.

The NUMMI plant is in Fremont, California, near the  Central Valley of California, the part of the state with the lowest literacy rates, and a favorite of home builders and Wall Street’s bankers. Billions of dollars were poured into the Central Valley and tens of thousands of homes were built and sold there during the real estate bubble. It would become Ground Zero of the foreclosure crisis.

The workers at the NUMMI plant were quite familiar with GMAC, because the mortgage lender was the only mortgage lender given access to the plant employees to sell them on refinancing their homes. “Put your cars, your credit cards… everything into a GMAC mortgage,” they were told at the numerous seminars held at the plant, “that way you won’t be in debt.”

GMAC actually had a booth inside the NUMMI plant… you could stop by for brochures 24/7 and 365 days a year. GMAC’s salespeople were on site at least two to three times a month to sell mortgages to plant workers. “GM employees pay no fees and no points with GMAC loans,” the workers were sold… I mean told. Everyone took out GMAC loans, it was like GMAC’s own personal gold mine.

Joe Phillippi, principal of AutoTrends, a consulting firm in Short Hills, N.J. said: “The thing that brought down GMAC was its sub-prime mortgage business.” GMAC lost $16.5 billion in its mortgage business from 2007 to 2009.

According to Bloomberg… GMAC Chief Executive Officer (for a month and a half of last year), and former Citibank executive, Michael Carpenter, was paid $1.2 million plus restricted stock options. He replaced former CEO Alvaro de Molina in mid-November of 2009, who received a $3.7 million salary.

GMAC lost money in nine of the past 10 quarters. The company hasn’t reported earning a profit since the final quarter of 2008. The company posted a record $3.9 billion loss in the fourth quarter of 2009, and lost $10.3 billion for the year.

The Congressional Oversight Panel, in March of 2010 said that despite three separate bailouts of GMAC totaling $17.3 billion, GMAC Financial Services “continues to struggle with its troubled mortgage liabilities.”

The U.S. government now owns 56.3 percent of GMAC, which serves as the primary source of dealer and car buyer financing for GM and Chrysler. The Obama administration currently estimates that taxpayer losses on the GMAC bailout may be at least $6.3 billion.

The Congressional Oversight Panel said that bankruptcy, and merging GMAC back into GM, could have put GMAC on a sounder footing. Instead, the panel said, Treasury treated GMAC more like large banks such as Citigroup and Bank of America. 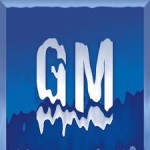 I just spent hours getting to know a couple that worked at the NUMMI plant for roughly twenty years. I don’t want to release their real name, so maybe we should just call them “THE DIRT FAMILY,” because that’s exactly how they’ve been treated by GMAC as they tried to apply for a loan modification.

They began their application for a loan modification in July 2009, they were current and had excellent credit… something in the FICO 750 range.

Are we having fun yet?

They turned to Bruce Marks’ traveling tent show of an non-profit organization, NACA, for help. NACA said they’d put them at the front of the line, but months went by and nothing from NACA. A sale date was set and NACA told the DIRTS they would have to file bankruptcy to stop the sale, so they did, but within days GMAC filed for the removal of the stay, although no new sale date was scheduled.

NACA wanted to wait until MR. DIRT actually lost his job, saying that this would make obtaining the modification easier. GMAC sent a letter to the DIRT’S bankruptcy attorney saying that they couldn’t negotiate unless the lawyer signed a letter saying it was okay to speak directly with the DIRTS. Apparently GMAC was aware of California Civil Code 2923.5, which says the bank must engage in meaningful discussions with a homeowner about alternatives to foreclosure before they foreclose.

The bankruptcy lawyer signed the letter. GMAC never contacted the DIRTS to talk about anything. GMAC won’t tell them if there’s another sale date set. GMAC says they never got anything from NACA.

Next thing they hear is that their house is being auctioned in a matter of days. They hire a law firm to try to stop the sale. The DIRTS and their new law firm ask GMAC who is the owner of their loan. GMAC says its GMAC. As it turns out it’s Fannie Mae.

GMAC won’t postpone the sale. Why? Not enough time. GMAC says the DIRT’S waited until the last minute… they procrastinated… they’re procrastinators, shame on them.

He worked 21 years at the NUMMI plant. Four more years and he would have earned his retirement pension. She worked at the plant until she was injured on the job… GM’s work comp doctor said the pain was all in her head… until she needed multiple back and shoulder surgeries… didn’t sue GM because he was going to make supervisor. They raised three children. Next year will be twenty years of a loving marriage. Hard work, but his life was in that plant… until it wasn’t. 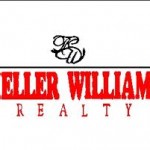 And GMAC sold their home. They couldn’t wait. Apparently the Central Valley needs another empty foreclosed home. Here’s the letter they found on their door the next day. It was from Steve Ewing of Keller Williams Realty in the Central Valley of California:

We all need a little help in difficult times…

We have been hired by the new owners of this property to bring it to market as quickly as possible. This bank owned property must be sold VACANT.

It is possible that we may be able to provide some financial help for your immediate move.

TIME IS NOT ON YOUR SIDE, PLEASE DON’T MISS THIS OPPORTUNITY!!

ALL OF OUR CONVERSATIONS ARE CONFIDENTIAL

Are they, Steve? You scavenger piece of crap. Are all of your conversations confidential? Just between us girls, is that what you were thinking would be the case? Well, surprise, Steve-O, because I hate secrets. And it’s no secret that you are an inconceivably inconsiderate and insensitive jackass who doesn’t deserve to stand within a hundred yards of anyone in this family.

Do you even know what a real day’s work is Steverino? Because the father in this family definitely does, while you… you puny pompous paper pusher in search of his next commission… obviously doesn’t. How dare you leave a letter like that on their door, and then weasel away in your Mercedes, or whatever kind of import car I’m betting you scamper around in. Did you even know there was a GM plant near by? Did you ever stop to care about the people that worked hard there… that gave their lives there?

No, Mr. Earwhig, I’m telling you that you didn’t care then, and you care even less now. These are people in your community that need your help… your empathy… your understanding… not your asinine “time is not on your side” threatening notes.

So, I have a suggestion for you and Keller Williams… leave this family alone. Don’t go knocking on their door… in fact, don’t bother them at all. They’ve already been inconceivably and undeservedly treated like DIRT by GM, GMAC and my federal government, they certainly don’t need to concern themselves with the likes of you.

Besides, they’re filing a lawsuit asap, so don’t plan on selling that house anytime soon anyway.

And GMAC… I have only just begun to uncover what unethical, incompetent, money-grubbing, greedy predatory pigs you guys are. You haven’t heard anywhere near the last of me… no you haven’t… I’m just warming up, as far as you’re concerned.

Now you want to be known as “Ally Bank?” Because you actually think that’s how we’re going to think of you? Like our “ally”? Well, bang up job so far, you ally you. With allies like you, who needs the axis?

Now… GMAC, GM, and the Obama Administration… you have a responsibility to these people whose lives you’ve so carelessly thrown by the wayside. These are people that built 8 million cars and trucks in and for this country, so the way I see it, they are responsible for creating a whole lot more jobs in this country than this or any administration has, I’ll say that for sure. So, Mr. President, its time to do the right thing.

GMAC has to act human here. Taxpayers bailed them out to the tune of $17.3 billion. And for what? Was GMAC too PIG to fail?

SEE WHAT HAPPENS WHEN YOU CALL THE NUMBER… COME ON… IT’S REALLY WORTH IT, I SWEAR IT IS. GRAB YOUR CELL RIGHT NOW AND CALL THE CORPORATE NUMBER FOR GMAC AFTER WE TAXPAYERS PUT $17.3 BILLION INTO IT.  IT ONLY TAKES A MINUTE…

Now, here’s a song performed by one of the unemployed workers from NUMMI: