My Grandmother, Standard Oil & the Banks 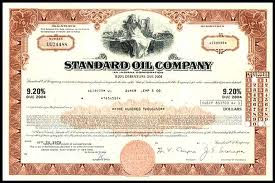 My grandmother, Lena Ames, was born in 1899.Â  She passed away in 1994.Â  She lived most of her life in New York City, Brooklyn to be specific, but she took the train into Manhattan on most days, and she kept on doing it right through her eighties.

Something else she kept doing right through her eighties and into her ninetiesâ€¦ hating Standard Oil.

At one point in our nationâ€™s history Standard Oil was the largest and wealthiest company in existence, but it crushed it s competitors ruthlessly and finally had to be broken up by the government as a monopoly.Â  Standard Oil was John D. Rockefellerâ€™s company, at one time the richest man in the world, and possibly the richest man ever.Â  But he went too far.Â  And he was never allowed back.

Standard Oil had to abandon its brand because consumers simply wouldnâ€™t patronize it after a certain point, and many of themâ€¦ would never patronize it again.

Itâ€™s an important lesson about consumer sentiment and behavior.Â  You can push our citizenry to a point, but go past that point and after that we wouldnâ€™t buy hundred dollar bills from you even if you were selling them for fifty dollars.Â  Never againâ€¦ never ever.Â  Rockefeller spent the rest of his life as a philanthropist; giving away much of his vast fortune, but it never took where my grandmother was concerned.Â  I wonder if he ever forgave himself.

Wells Fargo, Bank of Americaâ€¦ Chaseâ€¦ let alone the rest of the cast, have been abusing homeowners in this country for some time now.Â  They choose to participate in the governmentâ€™s lending programs, and then refuse to comply with the rules governing loan modifications.Â  People are paying attentionâ€¦ and theyâ€™re approaching being enraged.

I canâ€™t blame them in the least.Â  I mean, I would be hopping mad if I were losing my home due to the abuses of the lenders and servicers in this country.Â  And Iâ€™m not sure Iâ€™d forgive the bank all that easily eitherâ€¦ maybe never.

The news, however, about lenders and servicers is worsening every week.Â  Theyâ€™re known to foreclose when not allowed, charge up front fees for a loan modification, and in general put homeowners through an extraordinary degree of runaround.Â  Judges are calling in bank executives to testify as to their lackluster performance.Â  Even the White House has more than just voiced its displeasure at how lenders and servicers have handled HAMP.

No question about itâ€¦ the banks arenâ€™t improving their collective image at this point.Â  If the situation continues, weâ€™re going to be thinking about bankers like we think about used car salespeople, but without the latterâ€™s unwavering ethics and caring nature.

With the foreclosure crisis still being allowed to ravage the country unchallenged, the risk to banks going forward is both significant and real.Â  The line between being accepted by the public and being a pariah, is as thin as the bankâ€™s excuses for failing to modify mortgages.

In reference to homeowners who have sought loan modifications in order to remain in their homes, but found their lenders and servicers unresponsive and uncaring, the San Luis Obispo Tribune, Jim Wasserman of McClatchy Newspapers writes:

â€śTheir rejections have aligned them with a broad and growing swath of public opinion: sore that a U.S. banking industry that has received billions of dollars in taxpayer support in the past year hasn’t reciprocated on their behalf.

“I don’t know a single person who has benefited from the money that was given to lenders,” Egan said.

Added Seeley, “The taxpayers are the largest investor in these companies, so I would think they would be taking care of us first.”

Banks and financial institutions aren’t usually adored even in best of times. But after absorbing much blame for exuberant lending that created the housing bubble, they are increasingly absorbing a backlash for their response to the subsequent foreclosure crisis.

It’s not hard to see why. While banks and loan servicers have promised for almost three years to better address rising stresses on their home loan borrowers, foreclosures and defaults still haven’t seriously slowed.â€ť

In fact, they haven’t slowed at all… to the contrary, they’ve only increased. Â Almost three years.Â  And nothing.

Can you imagine the people.Â  Their faces.Â  Their inner thoughts and feelings.Â  The children who canâ€™t possibly understand.Â  The shame.Â  The anger.Â  The loss of hope as nothing has changed.

I looked up my blogâ€™s analytics to see who’s been reading these pages I write.Â  The Treasury Departmentâ€¦ The United States Senateâ€¦ Health & Human Servicesâ€¦ CBS Newsâ€¦ Senator Fred Thompsonâ€¦ countless mayors, a few governorsâ€™ officesâ€¦ many Attorneys General.Â  Many others at universities and major media outletsâ€¦ AND EVERY MAJOR BANK IN AMERICAâ€¦ no offense to the so many others I couldnâ€™t list here, but that are every bit as important to me.

Are you reading this?Â  Can you hear me?Â  As of this very morning the news that foreclosures have just finished their sixth straight month above the 300,000 level.Â  Thatâ€™s almost two million people that have lost their homes since last March, give or take a few days in whatever direction.Â  Can you hear them?

The article in the Tribune went on to say:

â€¦ it’s not just borrowers griping about the inability of banks to contain the crisis. Elected officials, besieged by complaints from constituents, are increasingly applying pressure as well.

This month, the League of California Cities, convening in San Jose, will consider a resolution urging 480 cities to yank deposits from banks that “fail to cooperate with foreclosure prevention efforts.”

“If you count up the money cities have in banks, that’s an amazing amount of power,” said Los Angeles City Council member Richard Alarcon, a former state lawmaker. “We have never tried to seize it. I’m trying to seize it. If you’re not a good player on the foreclosure front, we’re not going to put our money in your bank.”

The Tribune also reported that last week in Elk Grove, California (population 141,000), the City Council voted to support the idea of pulling the cityâ€™s money from the major banks.Â  Vice Mayor Sophia Scherman, who lives next door to a foreclosed home, said:

“It’s time. It’s past due. We should have done this some time ago.Â  It’s going to send a very strong message to these institutions.”

I pray it does, but I also know that we all can and need to do more.Â  A damn sight more.

But to the banks out there who are reading thisâ€¦ it may seem that you hold the lionâ€™s share of the cards today, but I assure you that it is an illusion.Â  You have already gone too far.Â  And once your brand is destroyed, you will have nothing.Â  Nothing but a lifetime to wonder what might have happened if you had acted differently.

Oh… people will come Ray.Â  People will most definitely come.

May you hear them screaming in your own field of dreams.

And God forgive us all for allowing this to go on one more day.