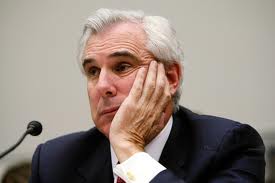 Hubris On a Scale Never Before Contemplated…

I remember when I learned what the word â€śhubrisâ€ť meant and Iâ€™ve considered it a very good word ever since.Â  As a writer, you sort of collect good words, carry them around with you, waiting for the chance to insert them into a sentence, thus rendering that sentence more powerful, or at least more complete.Â  Like a cherry placed atop the whipped crĂ¨me on a hot fudge sundae.Â  Ta da.

Well, less than two weeks ago, as I listened with great interest to the testimony before Congress of one Mr. Edward L. Yingling, the President and Chief Executive Officer of the American Bankers Association, I discovered that I had never even considered hubrisâ€™ true potential before.Â  When he was done, I stood up and exclaimed: â€śWhy, shave my head and call me baldy!â€ť And thatâ€™s not something I find myself exclaiming all that often, truth be told.

If you didnâ€™t see it, you may have missed something on the scale of Haleyâ€™s Comet.Â  It may happen again someday, but it could be a hundred years from now before it does.Â  Remember when Bill Clinton said: â€śIt depends on what the definition of the word â€śis,â€ť is,â€ť on television?Â  Well, it was kind of like thatâ€¦ but to the power of ten squared.

They were all up there in Congress and Mr. Yingling was being asked to voice his views on President Obamaâ€™s newly proposed federal agency for consumer protection.Â  The same agency I was making fun of when the President announced it a couple of weeks ago because I simply couldnâ€™t see it as the cornerstone of the regulatory change this country needed to prevent the nuclear meltdown of our financial markets from happening again.Â  Iâ€™m often skeptical about federal agency effectiveness, so sue me.

Hereâ€™s what Mr. Yingling had to sayâ€¦

â€śIt is now widely understood that the current economic situation originated primarily in the largely unregulated non-bank sector.Â  Banks watched as mortgage brokers and others made loans to consumers that a good banker just would not make and they now face the prospect of another burdensome layer of regulation aimed primarily at their less-regulated or unregulated competitors. It is simply unfair to inflict another burden on these banks that had nothing to do with the problems that were created.â€ť (Emphasis my own, but who on this earth could blame me for adding it?)

I know what youâ€™re thinking: â€śOh, no he didnâ€™t.â€ťÂ  But, oh yes he did.Â  Thereâ€™s not a chance Iâ€™m capable of making up something like that.

So, thatâ€™s the way itâ€™s going to be, is it?Â  The good bankers â€śwatchedâ€ť helplessly as mortgage brokers robbed the banks?Â  And now theyâ€™re being burdened unfairly.Â  Sniff, sniffâ€¦ man, I had no idea.Â  The banks were just innocent victims in all of thisâ€¦ It wasnâ€™t their fault.

Wowâ€¦ Holocaust deniers have nothing on this guy, let me tell you.

You see, first of all, I was under the impression that the commercial banks bought almost all of the non-bank mortgage and finance companies, before they imploded of their own volition.Â  But in this case, besides just considering the obviousâ€¦ thereâ€™s also the brazenly evident.

Who the heck made all those inconceivably appalling lending decisions?Â  Wasnâ€™t it the banks that let borrowers rack up colossal amounts of debt relative to their incomes?Â  No?Â  Well, alrighty thenâ€¦ but letâ€™s go find who ever that was and kick their butts, because they were out-of-control irresponsible to allow stuff like that to go down.Â  And a lot of consumers are wicked upset about the whole thing.

Of course, how could they not be?Â  Sure, some of the blame has to fall their way, but all you need to do is watch thirty-minutes of Helicopter Bernanke shoveling trillions into the banks, then a few Citibank celebrations at tony resorts, and then top it off with a slew of seven or eight figure executive bonusesâ€¦ and next thing you know youâ€™re sharpening your pitchfork and wondering where in the world you put your torch.

You donâ€™t have to be a political analyst to recognize that no one has learned a gosh darn thing around here.

Hubris, Mr. Yinglingâ€¦ incalculable amounts of hubrisâ€¦ thatâ€™s all I have to say.

Even so, next month the ABA is going to be offering â€śGet Smart About Credit Day,â€ť where someone will educate those in attendance on how to use credit wisely and responsibly.Â  When I first read the flyer, I assumed it was the bankers that were going to attend.Â  Then I saw thatâ€¦ nope, its bankers that are teaching the â€śuse credit wisely and responsiblyâ€ť class.

Of course they are.Â  And after that, I hear O.J. Simpson is delivering a lecture on diplomacy, followed by Dick Cheney, who will argue in favor of transparency in government.

The hubris of Mr. Yingling and his American Bankers Association simply knows no bounds.Â  Get Smart About Credit Day?Â  Really, Ed?Â  How about you guys go first?Â  When I screw up, I pay late fees and ding my FICO scoreâ€¦ you guys screw up, on the other hand, and the planet files Chapter 11.

The more I hear from Mr. Yingling, the more I want to make fun of his name.Â  I didnâ€™t say I was proud of such an instinct and Iâ€™m certainly not going to succumb to such an immature impulse, but bless his heart, heâ€™s ring-ding-a-ling-annoying, is he not?

However, banks, thrifts, and federal credit unions are exempt from the FTCâ€™s jurisdiction.

Of course they are.Â  Why wouldnâ€™t they be?Â  After all, the FTC would likely have its hands full enforcing Truth in Lending, Fair Credit Reporting, Fair Debt Collecting and Electronic Transfer rules at grocery stores and car washes.Â  Those sort of things come up in those places all the time, donâ€™t you know.

Well, Edâ€¦ I just read that Sen. Dick Durbin is bringing the bankruptcy reform bill back to Congress this fallâ€¦ the bill that can stop the foreclosure crisis in its tracks.Â  But we donâ€™t really need it, right Ed?Â  Because we can all just call our banks directly and ask for a loan modification?Â  Because the banks are here to help, right?

Sorry, Ed.Â  Not this time.